Mike62 - I posted a tutorial showing how to switch the retrieve on a Pfluger reel. Not sure if it will work on yours, but it might be worth looking at the tutorial to see if the internal geometry is similar.

John,
I'm not an expert on Paul Young rods either. If you want the best estimate of its builder, you might send photos to Bob Summers.

Bob Golder is probably the best expert about PHY rods other than Bob Summers. Golder is very active on Clark's Board (the CFRF), and I did some sleuthing with the CFRF search engine. The following information is either from his PHY database, Golder's CFRF posts, or Bob Summers' web site.

The serial numbers of PHY rods increased incrementally over the decades and were assigned as individual rods were finished. Paul Young was notorious, however, for skipping hundreds or even a thousand numbers occasionally. The speculation is that he did this to confuse his competitors. The serial number of your rod dates to the middle or late 1980s, pretty solidly in the Todd Young era.

The most informative landmarks of dates that I could find before and after serial #4898 are:


About the handwriting on your Perfectionist...

I've cropped and edited for color temperature and clarity your photo of #4898:

Some examples of Bob Summers' handwriting:

One example of Jack Young's handwriting: 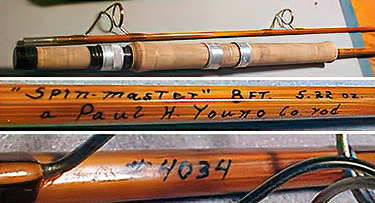 One example of Todd Young's handwriting:

There's not a lot to go on with only a single Todd Young inscription. His handwriting appears similar to Bob Summers'. The Summers' inscriptions look more cursive and flowing to me, but you can be the judge. The inking is inconclusive, but Bob Summers was well established in his own shop by the mid 1980s. Might Summers have inked or finished a Todd Young rod? I don't know, but the two shops were across town from each other.

Fishing small Partridge and Hare's Ear's upstream on the Firehole with Shaner is probably one of, if not the best fishing outing I've ever had. That PMD emergence followed by White Miller's was ridiculous to say the least... in the best sense of the phrase.

Spent a week in MT/WY and spent the majority of the time fishing wets upstream on the Firehole... believe me, it's a method that should be practiced and placed in everyone's repertoire. Mastering it is another story.

Someone mentioned earlier that this seems familiar to the guys who Euro Nymph... somewhat, yes.. those guys are using big shock leaders though so they can manage throwing heavy flies more effectively. Where as here, is a different game involving finesse.
Top

letumgo wrote: ↑Fri Jan 11, 2019 12:56 pm Mike62 - I posted a tutorial showing how to switch the retrieve on a Pfluger reel. Not sure if it will work on yours, but it might be worth looking at the tutorial to see if the internal geometry is similar.

I already checked your tutorial on that subject awhile ago. Very nicely done like all of your tutorials! (I've gone through every one of them...) Unfortunately it doesn't work with the Progress as far as my limited thinking takes me. It looks like the Progress was made as simplistic as possible and to appeal to what was/is probably the majority hand when it comes to reeling up.
Top

Smuggler, the Firehole is absolutely magical, as is all YNP. I love it in the Fall. For got to change the manual settings on my camera before shooting this, but you can see the dancing White Miller caddis. Trout were leaping in the air.

Over the years I've compared my Perfectionist with several others and I'm pretty satisfied that it's Bob's writing. I could be wrong. I know Bob a little and have visited his shop several times. Maybe when I'm in MI in May I'll take it along and see what he says. It's a nice rod no matter who built it and it's been with me for a long time. Per, who likes PHY rods says it's as nice a Perfectionist as he's ever cast. I bought it in the old T&T shop in Turners Falls, MA in 1987. It was part of a consignment of rods they had just gotten in but hadn't cataloged yet. When I asked the price they called the consignor and he said he needed $625 for it! Bought it on the spot! There was also a nice little Midge in the batch.
I've always wanted a Para 15, or better yet a Para 14, but have never come across one that was both in good shape and reasonably priced. And of the ones I've cast some are magic and some are real dogs.
Top

What is this "reel" of which you all speak?

Watching Oliver Edwards DVD, I couldn't help thinking it would have been so much easier with a tenkara rod (or a loop rod and horsehair line for the traditionalists).
TenkaraBum
Top

I enjoy Olivers videos very much and really can't get enough of them. It's his style of fishing I grew up on and have proven to myself many times that fishing downstream I will lose more fish.
I'll cast directly upstream at times depending on the situation, but at times will also cast up and slightly to the side. And I'll do this with pretty much any type of fly too. Like Oliver said, cast upstream, you do the fishing, and besides, it's more fun that way.

Casting down and allowing the fly to swing doesn't seem right to me at all, and I'm not judging anyone who enjoys fishing like that, but to me casting up stream there's more of a connection between the fly and I. Then if granted, it's the fish and I.

Does anyone know if Oliver Edwards is still around?
Top

ForumGhillie wrote: ↑Fri Jan 11, 2019 4:51 pm Smuggler, the Firehole is absolutely magical, as is all YNP. I love it in the Fall. For got to change the manual settings on my camera before shooting this, but you can see the dancing White Miller caddis. Trout were leaping in the air.

for those of you who are White Miller fans, try the Lackawaxen River in north east Pennsylvania, at the end of August.... it is like a snowstorm !!