I use a lot of Mad River dubbing and Hare line. Mad River has some nice shades (is that a plug er wot) .
Top

Ruard - Unfortunately I do not have a picture of the Isonychia to post, but here is a website that has fantastic reference photos of the Isonychia bicolor nymph (http://www.troutnut.com/specimen/477). Your question makes me want to go back to the vice and create a more accurate version.
Ray (letumgo)----<°))))))><
http://www.flytyingforum.com/index.php? ... er=letumgo

Ray, that is lovely. I'm wondering what method of presentation to you intend for this fly? I've used some large dark nymph isonychia patterns on the bottom with some success. (on brookies in WV...does that even count?) given that the iso nymph crawls to the edge and hatches like a stonefly, do you take these for the odd nymph dislodged and floating downstream.

that troutnut link is absolutely invaluable.

The master strickes again.......KILLER flies Ray. Absolutely ass kickin' KILLER. i love Mad River dubbings.....been usin' their stuff for years.....and Hareline too......their Haretron kills. It's Rabbitt and antron blended.
Dog, the first thing i thought of was Connovers.........when i saw Ray's flies. i did Conovers for a swap Peggy Brenner hosted on another site maybe a year ago.....blended my own dubbing using Muskrat and Red wool.....came out great. Joe's stuff is the best. He does everything according to the book.....i mean traditionally, so if that's what your after, there is no better source.
If you do blend your own.....make sure of two things. Just cut the little pieces of red wool very small.....no more than a quarter inch, and never run the blender for long spins.....just very short little bust at a time, and check each time to see if you've got it.

letumgo wrote:Ruard - Unfortunately I do not have a picture of the Isonychia to post, but here is a website that has fantastic reference photos of the Isonychia bicolor nymph (http://www.troutnut.com/specimen/477). Your question makes me want to go back to the vice and create a more accurate version.

Thanks Ray. Curious about that more accurate version.


greeting
There will allways be a solution.
http://www.aflyinholland.nl
Top

Ruard - Your question about the natural insect lead me back to the vice. Once I had a photo of the natural insect I just had to try for a better imitation. Here is my attempt (nymph style). Most fly patterns call for a white line down the back, but the photo seems to suggest a golden color, which is why I chose to use gold silk. 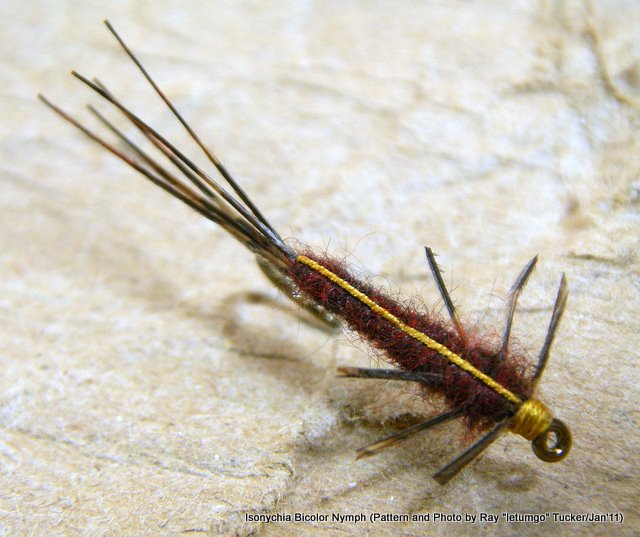 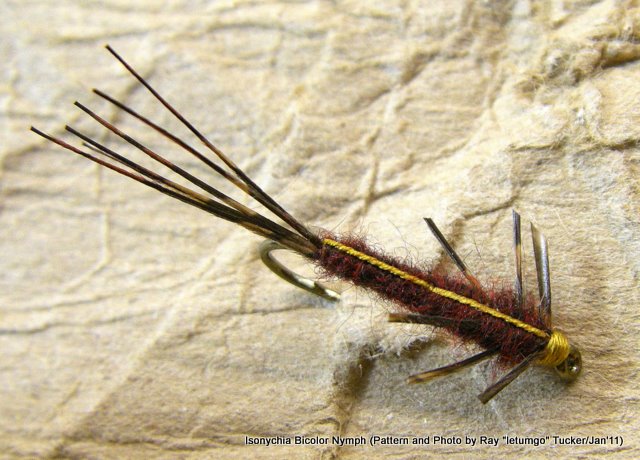 Notes About the Pattern Design:
The Isonychia bicolor nymph is noted to be a very powerful swimmer. For this reason, I tyed the fly with a longer tail, in hopes that it will allow greater movement of the fly in the water. I know the natural insect only has three tail fibers, but I haven't met a fish who can count, so I ignored this fact.

The tail and legs are all formed using natural turkey tail, which has been "burnt" in a dilute bleach solution to remove the tiny barbules that hold the fibers together. I chose this material since it had similar markings to the natural insect (mottled) and it had a similar shape (wide flattened) to their legs. I clipped off the fine ends of the fibers to get the width I wanted. The legs were formed by tying in the turkey tail fibers by the thin end (to allow greater movement).

I noticed that the tail fibers have a bit of a red cast to them and the head of the fly is dark like the body. Once the fly was finished I added these colors with sharpie markers. You can fine-tune the color combination based on local insects.

I think the body of the fly needs to be just a bit plumper. The natural insect appears to have more of a plump cigar shaped body. The body shape can easily be adjusted by forming an underbody, or using a bit more dubbing.

You really picked the glove from the wall:very well done!!

Greeting
There will allways be a solution.
http://www.aflyinholland.nl
Top

Ray, i've wayched no less than a dozen different tyers (probably closer to 2 dozen) do their version of an Isonychia, wether it be the dun, emerger or nymph.....and your nymph is fantastic. Most recipes don't call for the stripe to go all the way through (over the wing case) to the head.....but you pretty closely matched the natural in the pic there. Very well done. i've seen some pretty incredable things done with filo (philo?) pluembs, or after shafts, to insinuate the gills.....but it's a lot of work winding (wraping), the dubbing through the little tiny fibers alah Matuka style, all the way the length of the abdomen, using a bodkin to seperate spaces for the wraps. In the Catskills an Isonychia Dun is also known as a Slate Drake, and the wings are a light greyish color, often imitated using poly yarn for a post and done Parachute style. Teal flank feather makes for a nice devided wing, if your going to hackle (med. Dun), the traditional Catskill style.

Learn to see with your ears and hear with your eyes
CAUSE, it don't mean a thing, if it aint got that swing.....
http://www.pureartflytying.ning.com
Top
Post Reply
57 posts