letumgo wrote:William - These only take about the time to tye two normal flies. Once you start cranking them out, you can probably do these in under five minutes. It is just like tying two flies.

Ray, who said I could tie a fly in only 5 min's? (big grinning emoticon here)

William - No wonder your flies look so pretty, you spend more time tying them. I try to spend less time tying then, than it takes me to loose one.
Ray (letumgo)----<°))))))><
http://www.flytyingforum.com/index.php? ... er=letumgo

The R50 is referred to by Mustad as a wet-dry hook. The container label still has the 94840 designation also. In comparing to the old 94840 hooks the R50 would appear to be the same wire size and perhaps just a tad shorter in length but having the micro barb.

The R90 by picture appears to have the same round bend as the R50 but is of a much heavier wire. I believe Mustad describes it as 4 heavy and is their nymph entry.

The latest packaging for the R50 describes it as a dry fly hook.

The new designation scheme that Mustad is using actually makes some sense:

Hank - Here is a photo showing how the wiggle-tail extension is tyed in. Basically, I start the tying thread just behind the eye of the hook and then after four wraps, I tye in a piece of black beading cord. Wrap the tying thread back to the bend of the hook, binding the black cord against the shank of the hook. Then insert the tag end of the back cord thru the eye of the wiggle-tail extension (already finished rear half) and bring the cord forward along the hook shank. I form a simple dubbing loop (the gold colored loop to the left side) just before winding the tying silk forward. At this point I would trim the excess beading cord and wind the silk back to the bend of the hook. Dub the silk and wind if forward, forming the body of the fly. Twist the dubbing loop into a tight cord and pull over the top of the body, forming the lateral line. Tye it the hackle by the tip and wrap the hackle. Trim off the excess hackle after it is secured with the tying silk. Whip finish and clip off the thread. Done.

Bob - Interesting point about the peacock herl bodies. I've heard that each of the patterns you mentioned are great imitations for Isonychia nymphs. I believe it has something to do with the color of the peacock herl bodies once they become wet. I have noticed a pronounced change in the color of the herl fibers after a pattern has been fished (wetted). The body of the fly takes on a bronze/brownish tone in natural sunlight. I tried to capture it in a photo a couple years back (the fly is one of my POP series flies, tyed with a golden brown Kreinik silk abdomen). If you look closely at the thorax of the fly, you can see the brown/bronze tone of the wet peacock herl. I think this is a close match to the color of the Isonychia nymphs, which may explain part of the success of the patterns you mentioned. 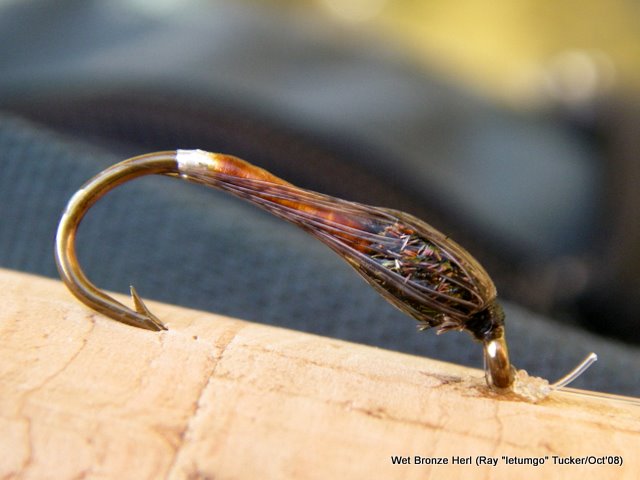 Thanks for the pic. Makes more sense than hocus-pokus ... poof!

That wet pic is purrrdy.

I would suspect there is some reasoning behind the inconsistency in Mustads packaging designations. Bob had mentioned the Mustad package label stating the #94840 as a dry fly hook. I took a look at a recent purchase and sure enough. There it was stamped there as big as life DRY. I should mention the reason I put down wet-dry in a previous post was two fold. In doing a bit of Google research before posting I brought up a Mustad Signature series page that listed the #94840 hook as a wet-dry. Then too if one would see my wet fly boxes you would see any number of soft hackle and some winged wets fashioned on Mustad #94840 hooks. Perhaps not the hook of choice by many to wrap a wet fly on but if one wants to keep their hook inventory to a minimum there is opportunity to wrap a small piece of lead or lead substitute to the shank and still wind up with a wet fly that will fish where one wants it in the water column. I think it was Gary Lafontaine that mentioned his preference to fish a lighter wire hook as he didn't care to punch a bigger hole in a fish he was just going to release anyway. There's likely some reasonable logic in that also isn't there. Oh boy, Ray I do apologize as I have truly drifted from the intent of that lovely Isonychia Beaver.

Jerry - No apology necessary, I have really enjoyed the wide-ranging nature of this post. Although the hooks are listed for dries, I regularly use them for wingless wets. The R50's are one of my favorites. (but then again, I say that about all of my materials...chuckle)
Ray (letumgo)----<°))))))><
http://www.flytyingforum.com/index.php? ... er=letumgo

You see, that's why i had mentioned that most tyers in the Catskills leave off the white stripe from the thorax area. And it is very true that in the Catskills we have two times a year for major ISO hatches.....June and Sept.

btw, i went to Charile Craven fly shop today, in Arvata, CO. Just 10 minutes or so from the hotel here. Nice shop, Charlie was there..... http://www.charliesflybox.com i thinmk it is....
Learn to see with your ears and hear with your eyes
CAUSE, it don't mean a thing, if it aint got that swing.....
http://www.pureartflytying.ning.com
Top
Post Reply
57 posts