Well, here is may second attempt at the Derby Shire style fly. 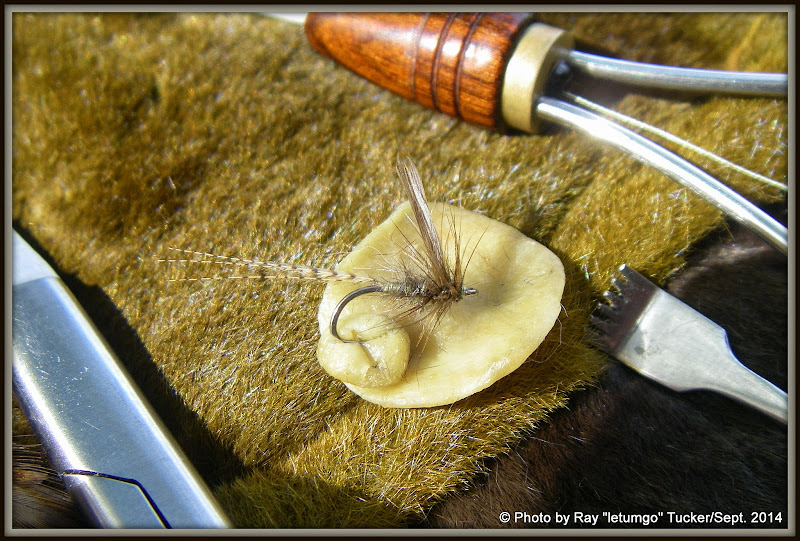 A view of the materials used to create the fly. 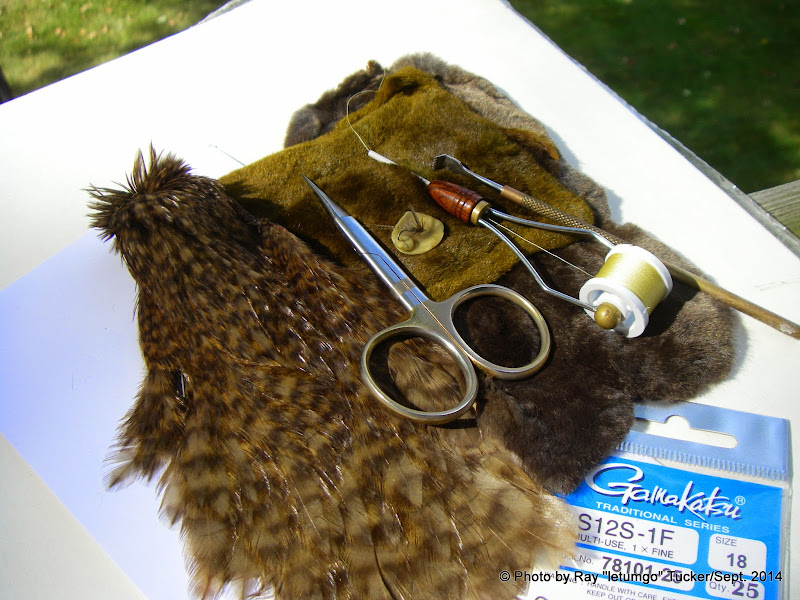 The dubbing used on the body of this fly was a blend of 75% Natural Dun Mole Fur/25% Mole Fur Dyed Olive. The block of wax in the aluminum foil was made by Eric (Smuggler) Kelly. I will be splitting up the block and sharing pieces of the block with the folks who participated in this swap. Thanks Eric! 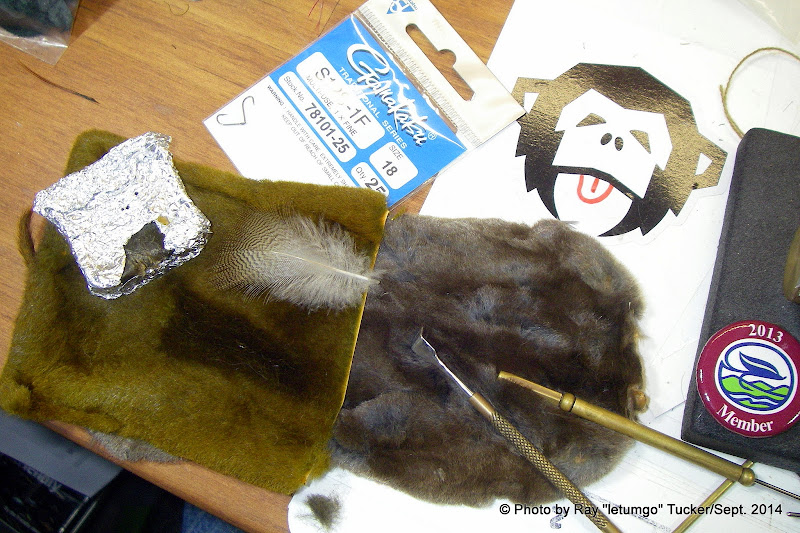 For those of you who like to peak under the wraps, here are a couple photos showing how I created my swap flies:

TYING INSTRUCTIONS/Step-by-Step:
1) Mount hook in vice.
2) Prepare tying thread by waxing the silk with the tying wax. This helps make the silk tacky and ensures it adheres to the hook, creating a durable fly.
3) Cast thread onto the hook and make three firm wraps. Leave the tag end on the thread, for now.
4) Prepare a small hen hackle feather by stripping the fluff off the base of the feather. Tye it onto the hook, by the stem, with the tip hanging out over the eye of the hook.
5) Prepare a small bundle of wing fibers (clipped from a wing feather and rolled into a small bundle). Tye the bundle onto the hook with two or three firm wraps. Trim off the silk tag/wing butts/feather steam.
6) Clip off three fibers of wood duck flank and tie them in as a tail. Try to have the nature curve of the feather facing upwards.
7) Wind the tying thread back to the bend of the hook and then apply a fine layer of dubbing to the waxed thread (touch dubbing ball to the waxed thread to "dust" the thread with dubbing fibers). Note that the dubbing should be very sparse. 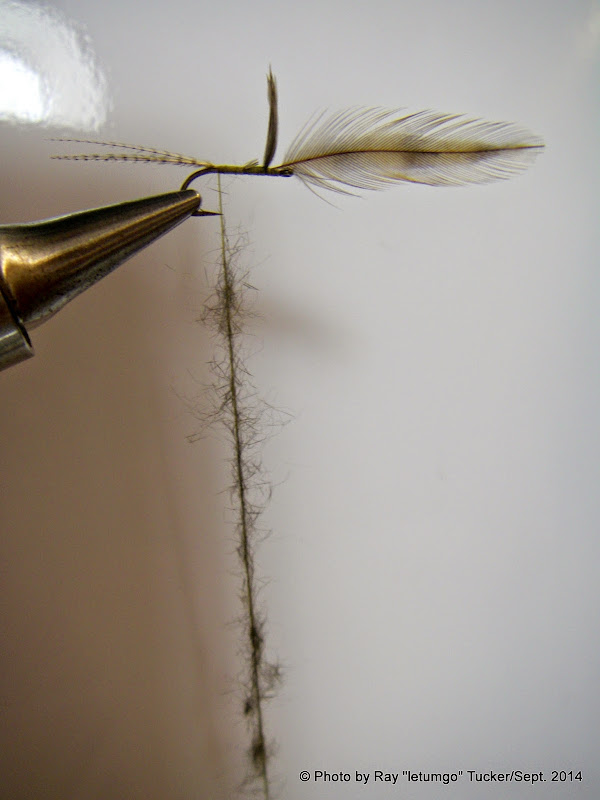 In the next photo, I have gone back and removed some of the excess dubbing. I only wanted a fine layer along the thread. 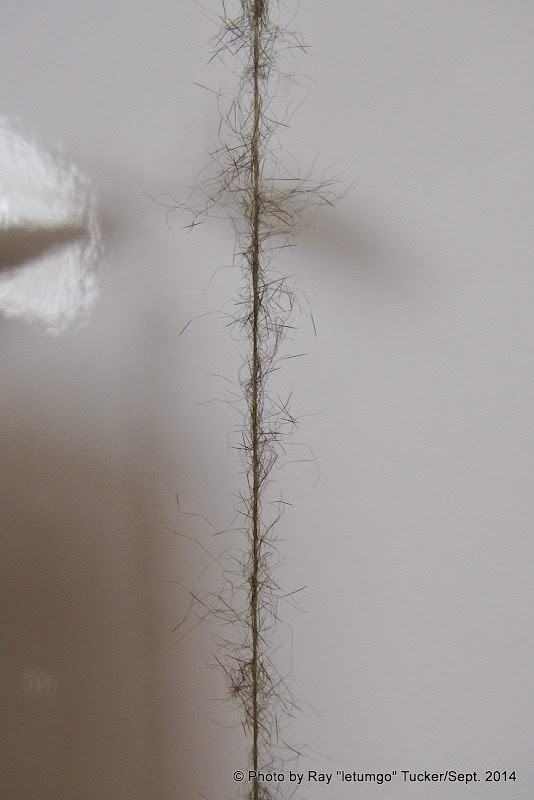 8) Wrap the tying thread forward, all the way to the eye of the hook, and then back to roughly the middle of the hook (just behind the wing). Wrapping in this way will create a slightly larger thorax region to the fly and will help position the thread to reinforcing the hackle. 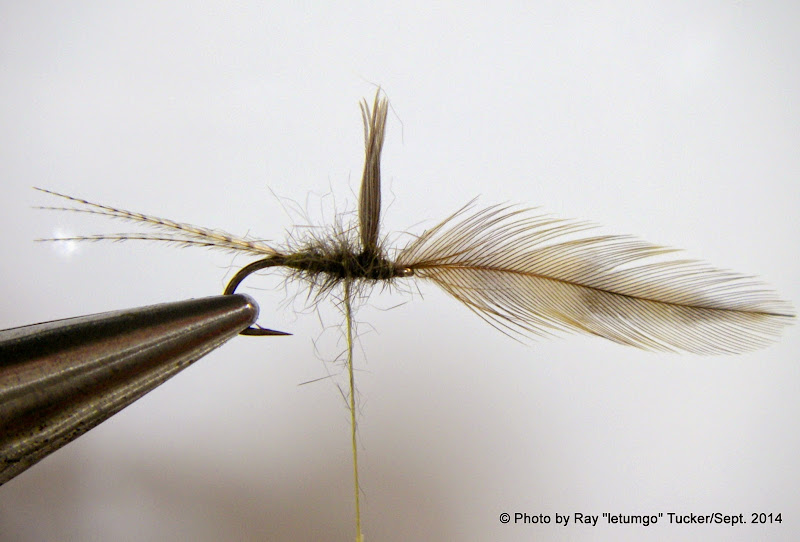 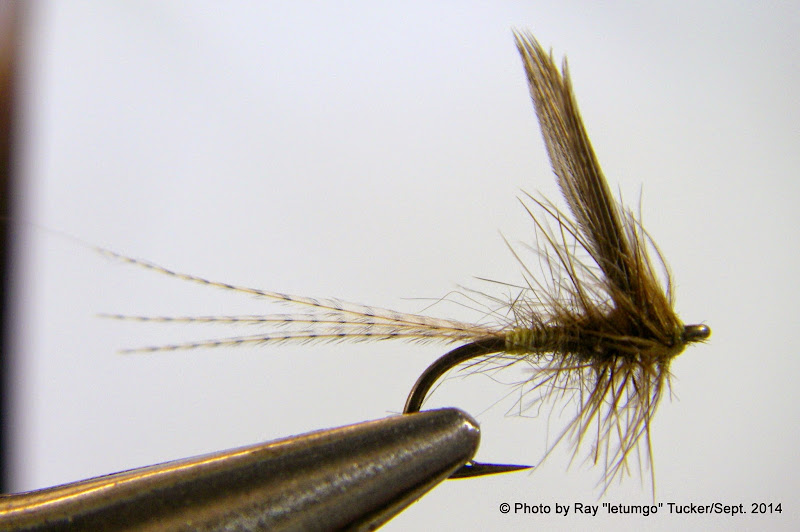 The shadow shows the impression the fly would make on the surface of the water (before it sinks...that is...) 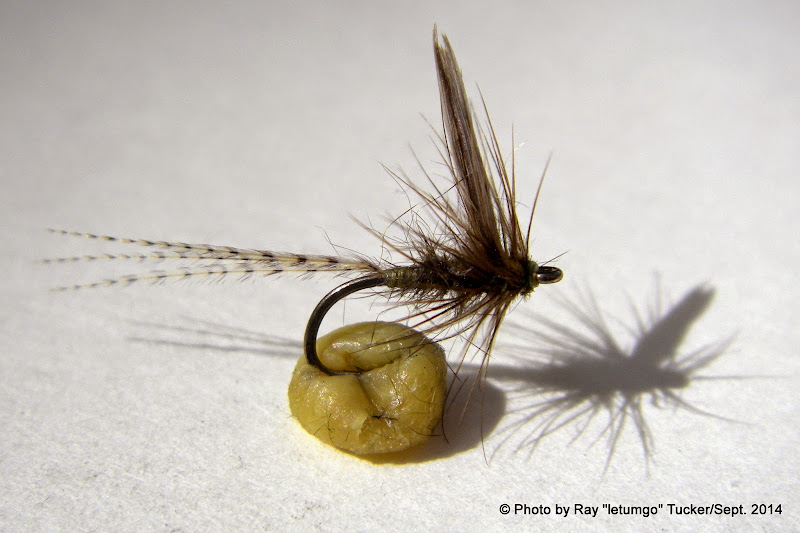 EXPLANATION OF MATERIAL CHOICES:
I wanted to follow Chris's lead and take a moment to explain a few of my material choices, for the revised version of the fly.

Hank was kind enough to send me a copy of several pages from his copy of Rodger Wooley's book "Modern Trout Fly Dressings (Title page, plus pages 74, 75, 76, 77, 98, 99, 100 & 101). I carefully read the descriptions in these sections and realized I was trying to tye a fly, which on first appearance looked blue dun (grey), but on closer inspection had hints of olive. I then decided to change up the materials to capture these colors a bit more. I had a small piece of olive dyed mole fur, and a natural mole which was a steely dun color. I raked the hides and created a blend (75/25) of the two colors, favoring the dun color.

I then looked thru my natural gamebird skins, looking for a suitable winging material. I settled on wing quill feathers from a California Quail. The reason I chose this bird, is because the feathers have a natural grey-dun with an olive cast to it. This seemed perfect for the colors I was looking for.

Please note that I decided to stick with the Gamakatsu hook. I looked at several other hook types and sizes, but in the end chose this one since I liked the proportions. This is a tiny hook (size 18), but it still seems to create a nicely proportioned fly. I ended up with the overall profile that I was striving for.

Here is a close-up of the profile shown in the Skues book for comparison.

I used woodduck tail fibers, because the pattern appeared to have a tail. It is my understanding that the Skues era flies had short whisky tail fibers. I have intentionally left them longer, as a personal style choice. I think the longer tail fibers will add movement and give the finished fly a more balanced look, at least to my eye.
Ray (letumgo)----<°))))))><
http://www.flytyingforum.com/index.php? ... er=letumgo

Ray, I must have been in a coma last year when you posted this. That is an outstanding fly and a nice example of the style. It's a great result but my favorite image is the close up of the very lightly dusted dubbing on the thread. I used to do more of that and I should make it part of my process more often. Nice SBS and I'm sorry I didn't see this before.

(It's an excellent reason to have this SBS section more prominent. Thanks again.)

For those of us who are new to tying SH flies etc. this is going to be a wonderful resource. It will help us with the materials as well as the proper tying of a spider etc which is something that I will certainly use. Thanks again, Ray, well done!!!
All the best,

This is excellent, Ray, for all the reasons that others have noted. And Eric's wax is also very good. Nice to have such SBS tutorials up front on the Forum.
Some of the same morons who throw their trash around in National parks also vote. That alone would explain the state of American politics. ~ John Gierach, "Still Life with Brook Trout"
Top

Whisk is the British term for tail but whisky is a good addition to any fly tying recipe.
Top