This is the fly I tied for the 10 Year Anniversary IBF Swap. 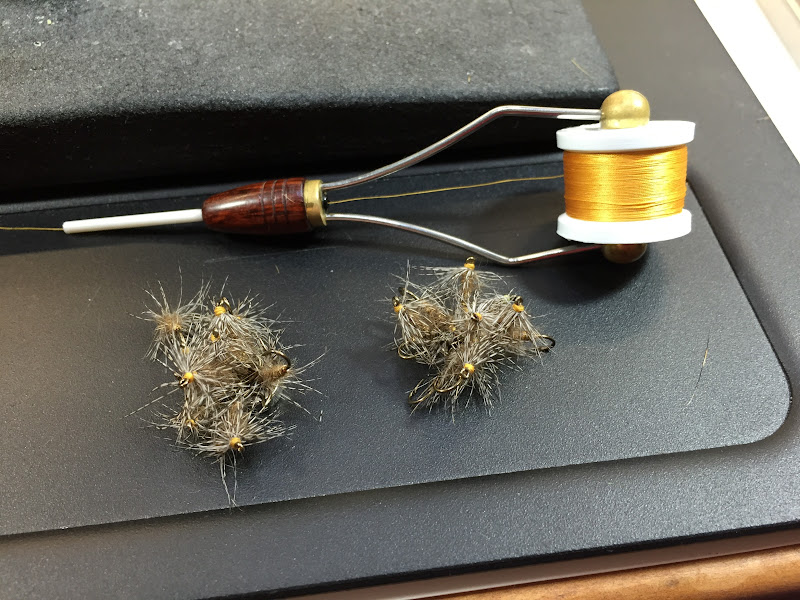 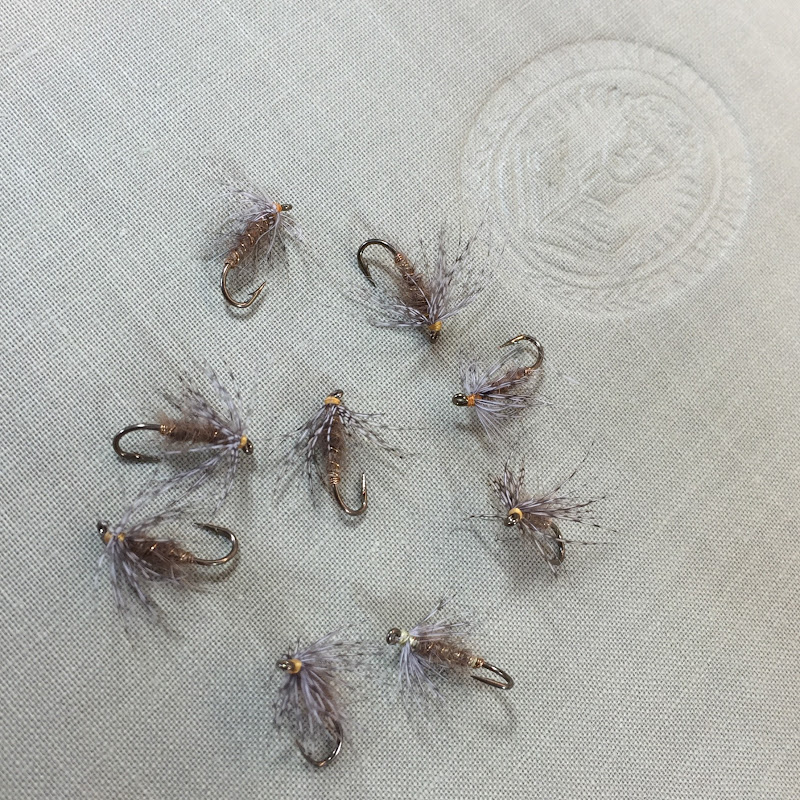 Has anyone else taken the dust jacket off their copy of "The Art of Tying the Wet Fly"? Under the dust jacket, on the front cover of the book, is a cool embossed figure. I thought it made an interesting photo. 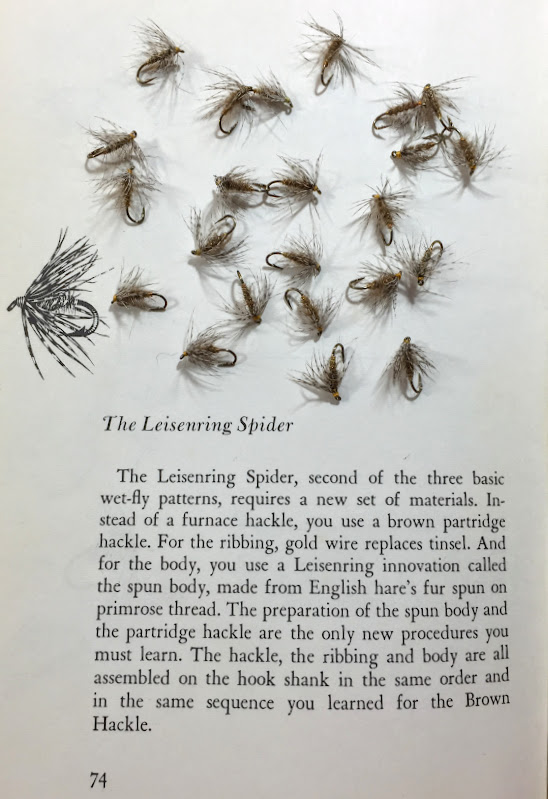 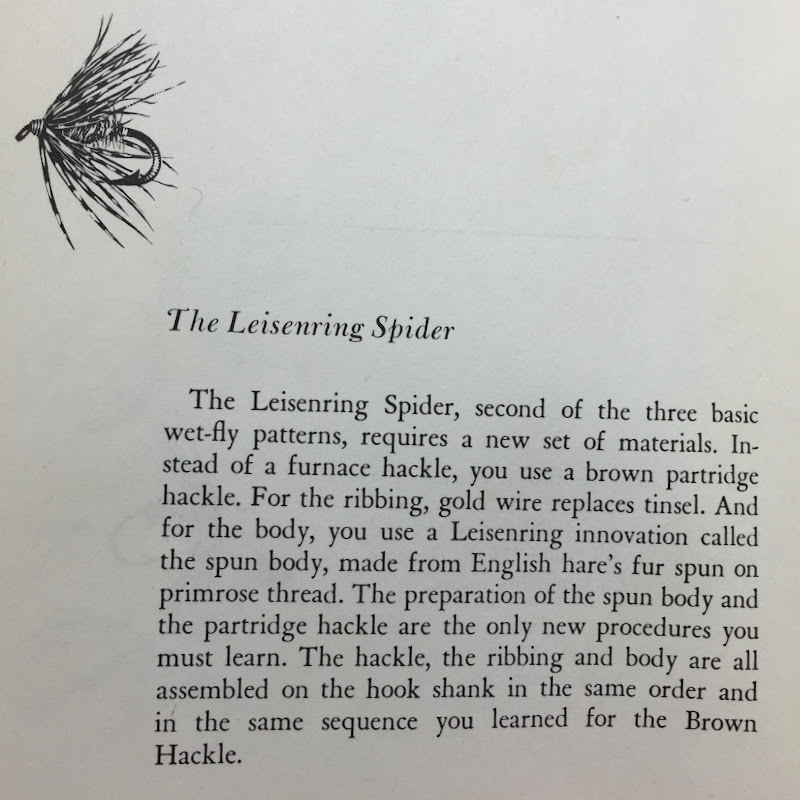 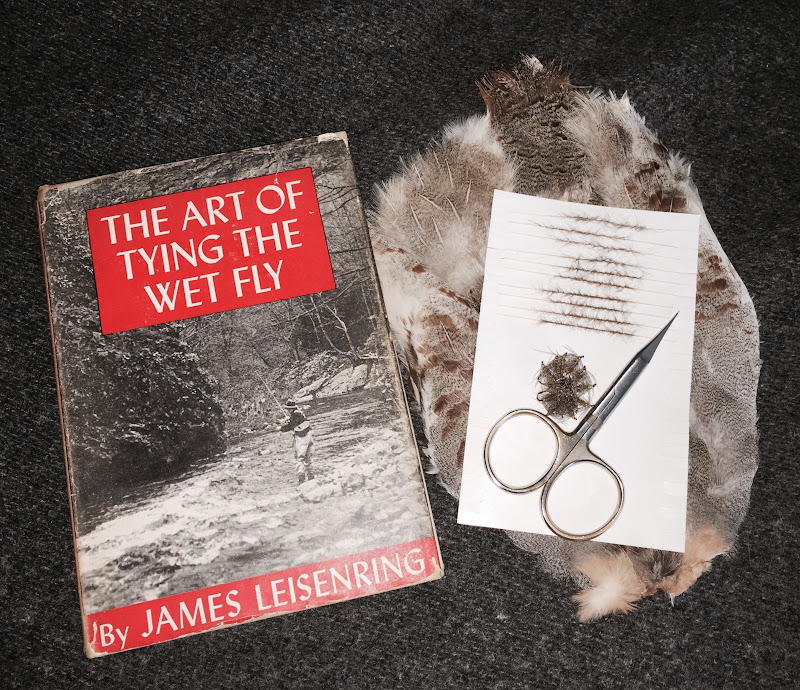 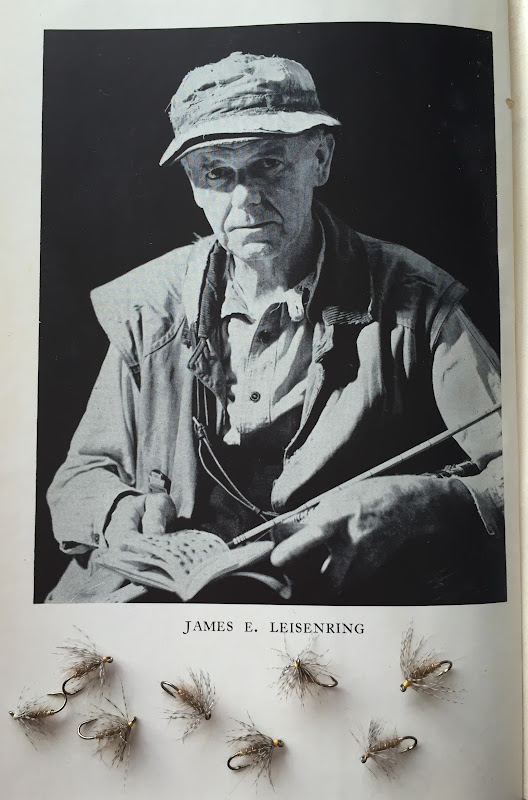 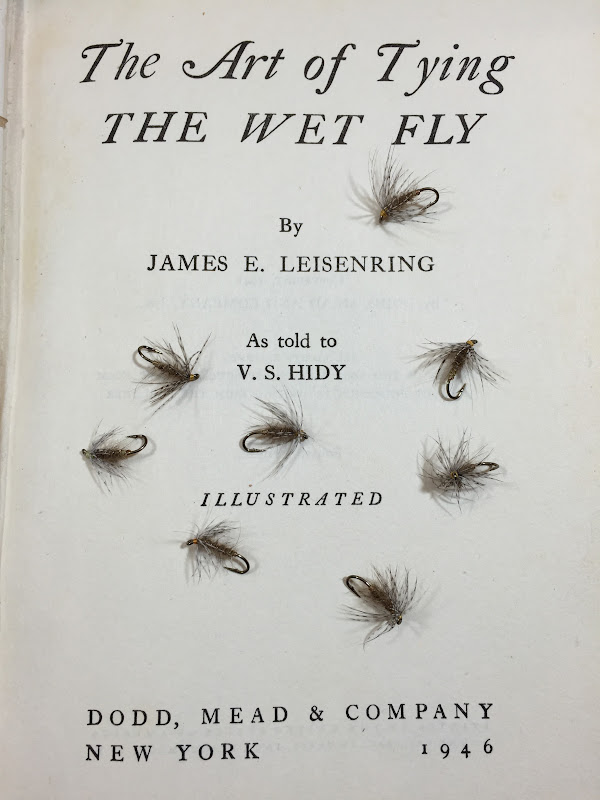 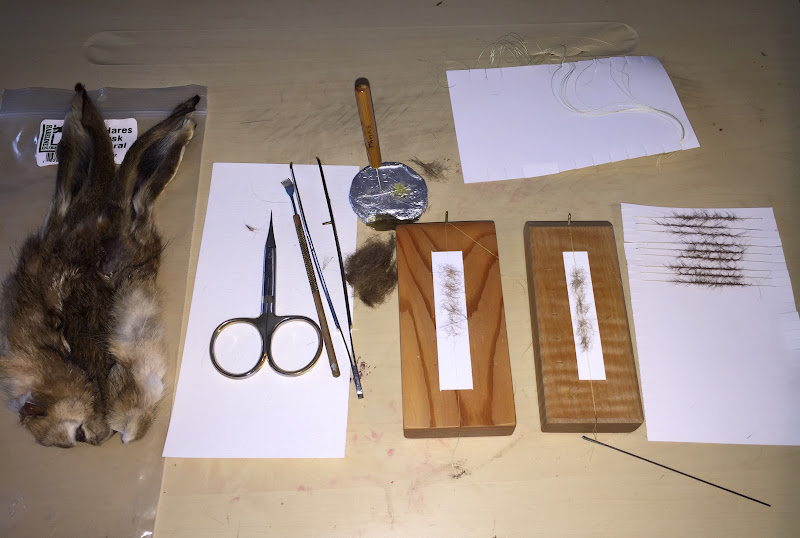 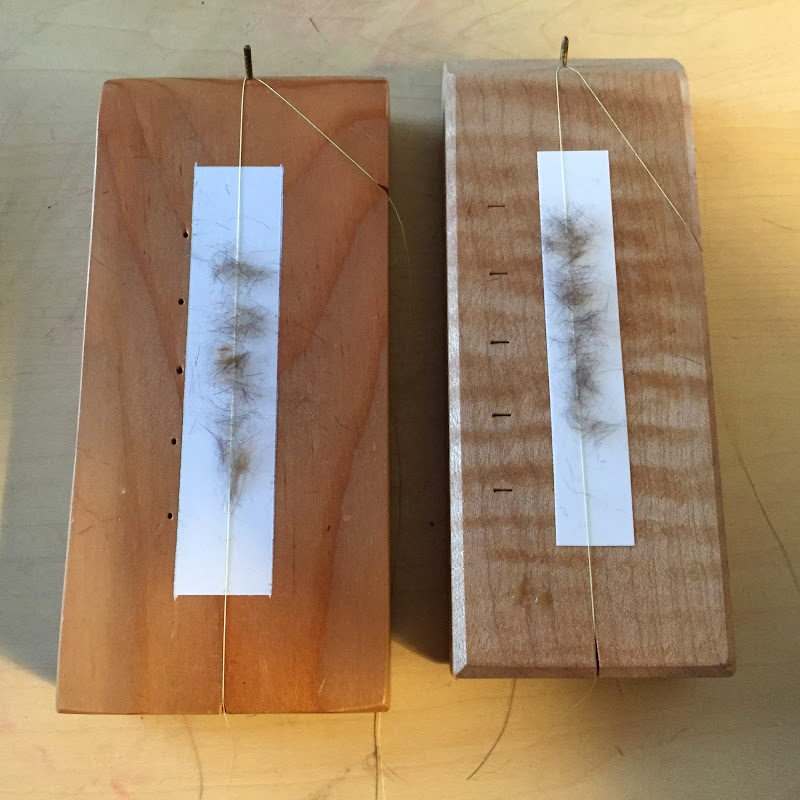 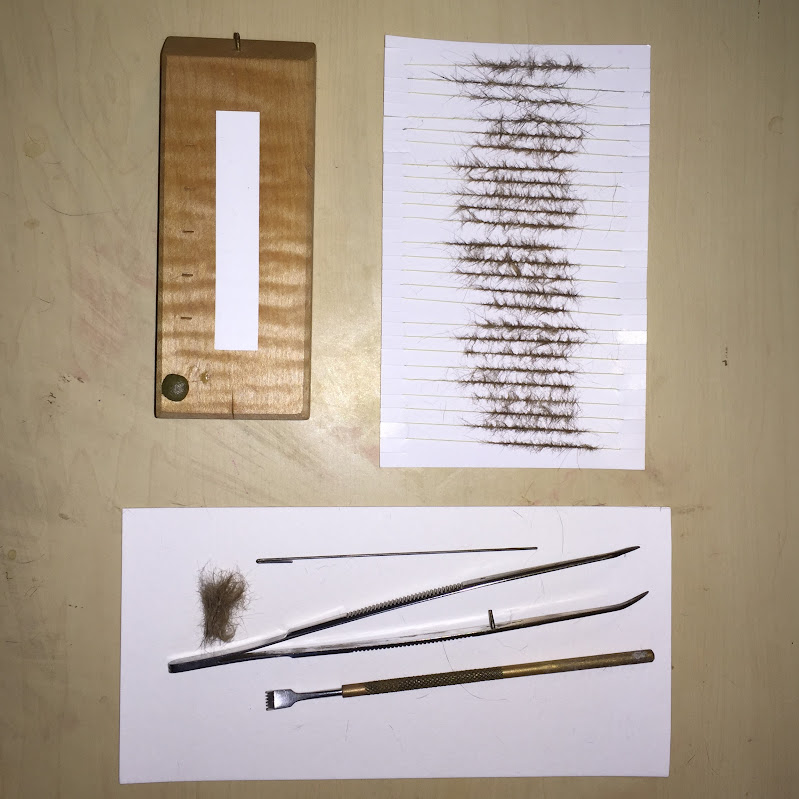 For best results, prepare ahead of time and let them set for a day before using them to tye the flies. The wax will hold the dubbing in place better after it sits overnight.

I used Jim Slattery's wax to form the dubbing brushes, and to treat the silk used for tying the fly. I broke my thread a couple times while tying the set of swap flies. I was amazed each time, with how the wax gripped the underlying materials and hook shank, preventing the fly from untwisting when the thread broke. I think this was a key advantages of the waxed thread. I must have been a huge help, before using a bobbin to hold your thread.

This photo shows my work process, when tying a large batch of flies. The materials are prepared and laid out in front of me. I count out the required number of hook (see magnet to the left), then prepare the hackle (unstripped hackle in the middle/ prepared hackle on the right). More magnets hold my hackle pliers and whip finisher within easy reach. The rest of my desk is a jumbled mess at the moment, but the area under and in front of the vice works nicely. 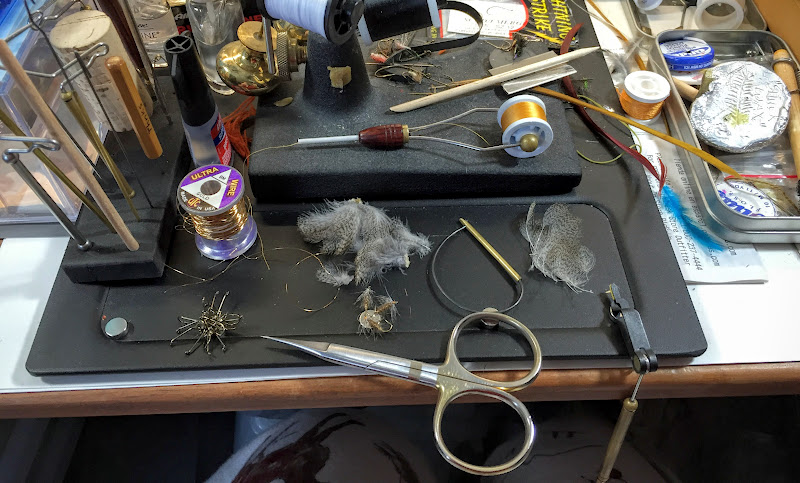 TYING INSTRUCTIONS
1) Mount hook in vice
2) Wax the tying silk and then secure the silk to the hook with five firm wraps just behind the eye of the hook.
3) Prepare a partridge feather by stripping off the basal fluff. Tye the feather in by the stem, with five wraps of thread.
4) Tye in a length of fine copper wire (in this case gold) and wrap back towards the bend of the hook. Stop just behind the point of the hook.
5) Wax roughly 6 inches of the tying thread. I like to keep the wax on the side of my index finger, while tying. The wax remains soft, and handy while tying.
6) Lift a prepared dubbing brush into place, under the last wrap of the tying silk and wrap tying silk forward to the front of the hook. Remember to leave a little room for the next steps. Don't crowd the eye. 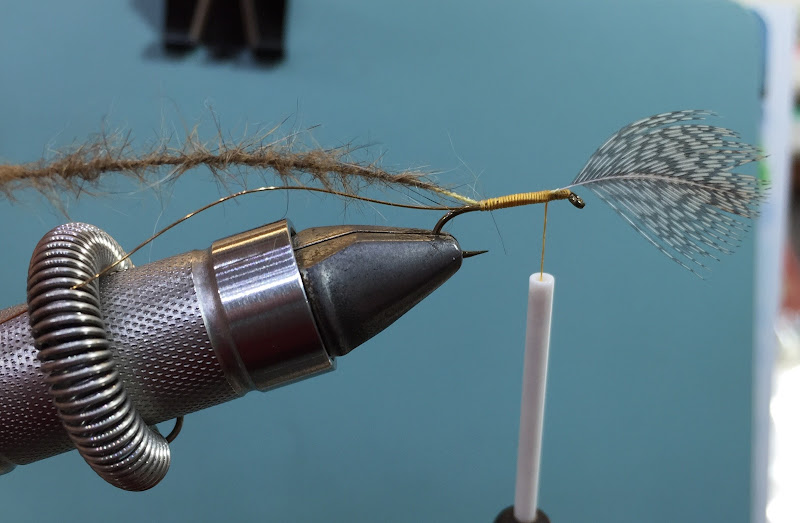 7) Wrap the dubbing brush forward and secure with two wraps of thing thread.
8) Wrap the wire rib towards the bend of the hook, in three tightly touching turns. This will form a small wire tag at the back of the fly. Now wind the wire to the eye of the hook in roughly five open wraps, forming the rib. Secure with a couple wraps of well waxed tying silk. Wiggle ("helicopter" or "worry") the wire rib until it breaks off smoothly under the thread wraps.
9) Wind the hackle backwards towards the body of the fly, in two wraps. Secure the hackle by wrapping the tying silk forward thru the hackle, wiggling the thread back and forth as you go. Wiggling the thread helps prevent trapping of the hackle fibers. Once the hackle is secured, use the blade of you tying scissors to cut off the hackle tip.
10) Whip finish the head of the fly. In this case I intentionally formed a larger head, similar to the ones on Leisenring's flies.

Out of curiosity, I made a couple more of these flies by substituting fox squirrel dubbing, instead of the traditional hares ear dubbing. The fox squirrel dubbing is more spiky than the hares ear and it looks amazing against the primrose silk core.
Ray (letumgo)----<°))))))><
http://www.flytyingforum.com/index.php? ... er=letumgo

I think you could post this spread in the tutorials as well.
Top

Thanks Bill. It started out as a simple post, but then I added the pattern listing and then wanted to document the steps I used for tying the swap flies. In the end, it turned into a tutorial.
Ray (letumgo)----<°))))))><
http://www.flytyingforum.com/index.php? ... er=letumgo

Ray,
I am picking my jaw up off the floor again over this post! The beauty of the flies is enhanced by the well thought out design of the photos! Great job which brings great joy to all of us!
Doug
Fish when you can, not when you should! Anything short of this is just a disaster.
Top

You should send a copy of this post along as a brochure with your swap fly, Ray. Man, you are putting us all to shame (but we love it!).
Some of the same morons who throw their trash around in National parks also vote. That alone would explain the state of American politics. ~ John Gierach, "Still Life with Brook Trout"
Top

tie2fish wrote:You should send a copy of this post along as a brochure

Yeah. I did get carried away with the photos, didn't I?

tie2fish wrote:You should send a copy of this post along as a brochure

Yeah. I did get carried away with the photos, didn't I?

Not in the least. This is exactly what I aspire to, but lack the dedication. So much information in a single thread. Thanks for taking the time to present the process and the context. Beautifully tied and I'm looking forward to seeing these. Awesome.

The speed with which you can do all of the required aim, click, shoot, process and arrange
all of the items then process the the she-bang into a comprehensive post with the included
photos and text accompanying it is to me astonishing. When it comes to doing all that would
be required, plus going back and correcting all of the misspurled wodrs would take me a week.
For verily, I am a Sloth on the keyboard.
I am consistently amazed at your (and other's), posts that include these remarkable postings.

Thanks Hank. All of the photos were taken with my phone. I had it sitting next to me, while I was working on the spun bodies and the flies. It's so easy to take snap a quick photo, and then go back to what I was doing. I could do a better job with my good camera, but the process would have been much slower. The cool thing with phone photography, is how you can upload the images directly, without using a computer.
Ray (letumgo)----<°))))))><
http://www.flytyingforum.com/index.php? ... er=letumgo