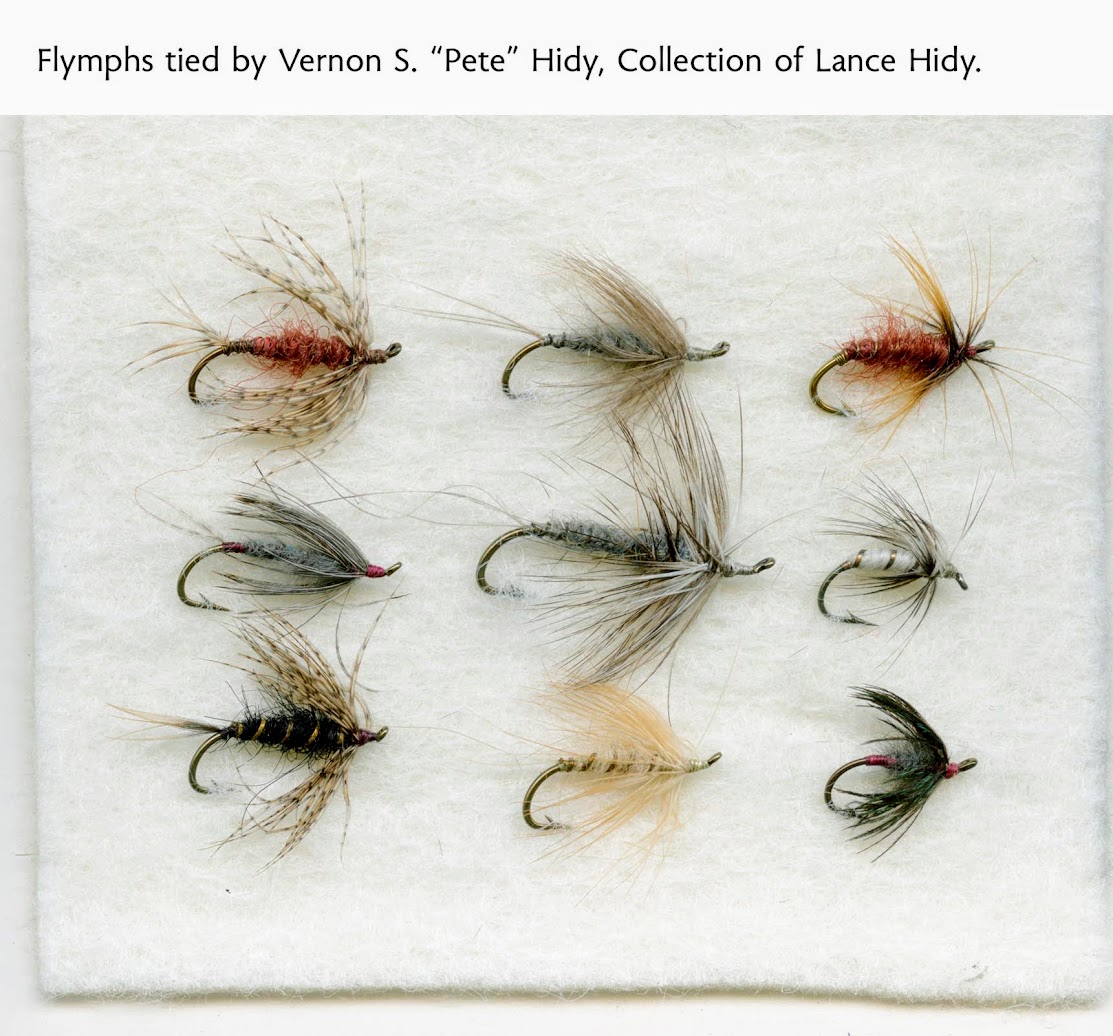 The fly in the lower left hand corner is the fly I was copying.

Here is my version of one of Pete Hidy's flymphs, and the tyng steps I used to replicate it: 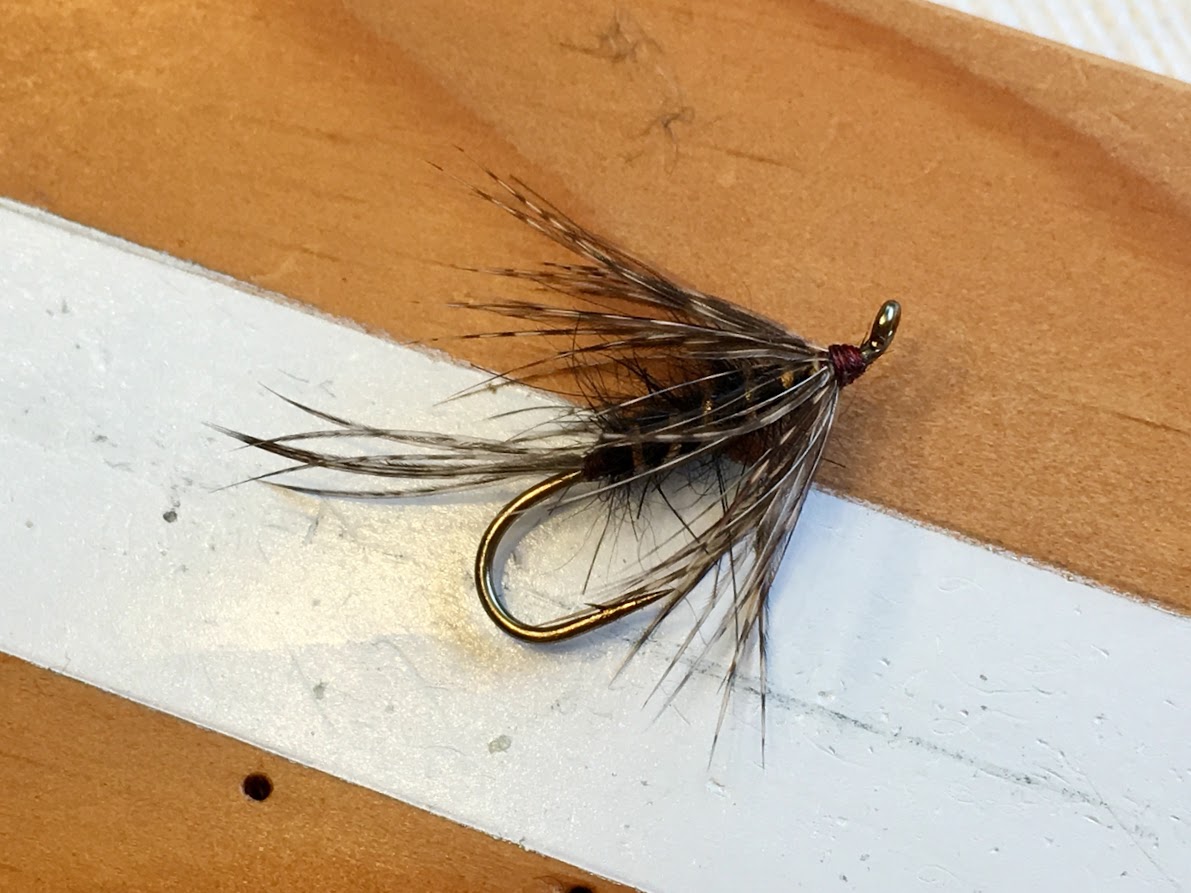 Note - This is the pattern as I have tied it. The original fly recipe might have been somewhat different. I could not tell what hackle fibers were used for the tail of the original pattern. They did not look like Patridge fibers, but I decided to make the tail and collar match. I just like the look of the barring of the patridge fibers next to the black ribbed body. One of the other guesses I made, was the color of the tying silk. After studying photo of the original for a while, I convinced myself that the head was claret silk. In hind sight, I probably should have spun the bodies on claret silk as well, to give a touch of under color.

I spun bodies that were initially 2" of dubbing (the little marks along the white strip of the dubbing block help uniformity of the spun bodies). At the end of the tying process, I would recommend increasing the amount of dubbing to 2.5 inches, maybe even a bit more. When I was working on the body taper, I increased the diameter of the underbody, which increased the total length of silk core needed to finish the body. 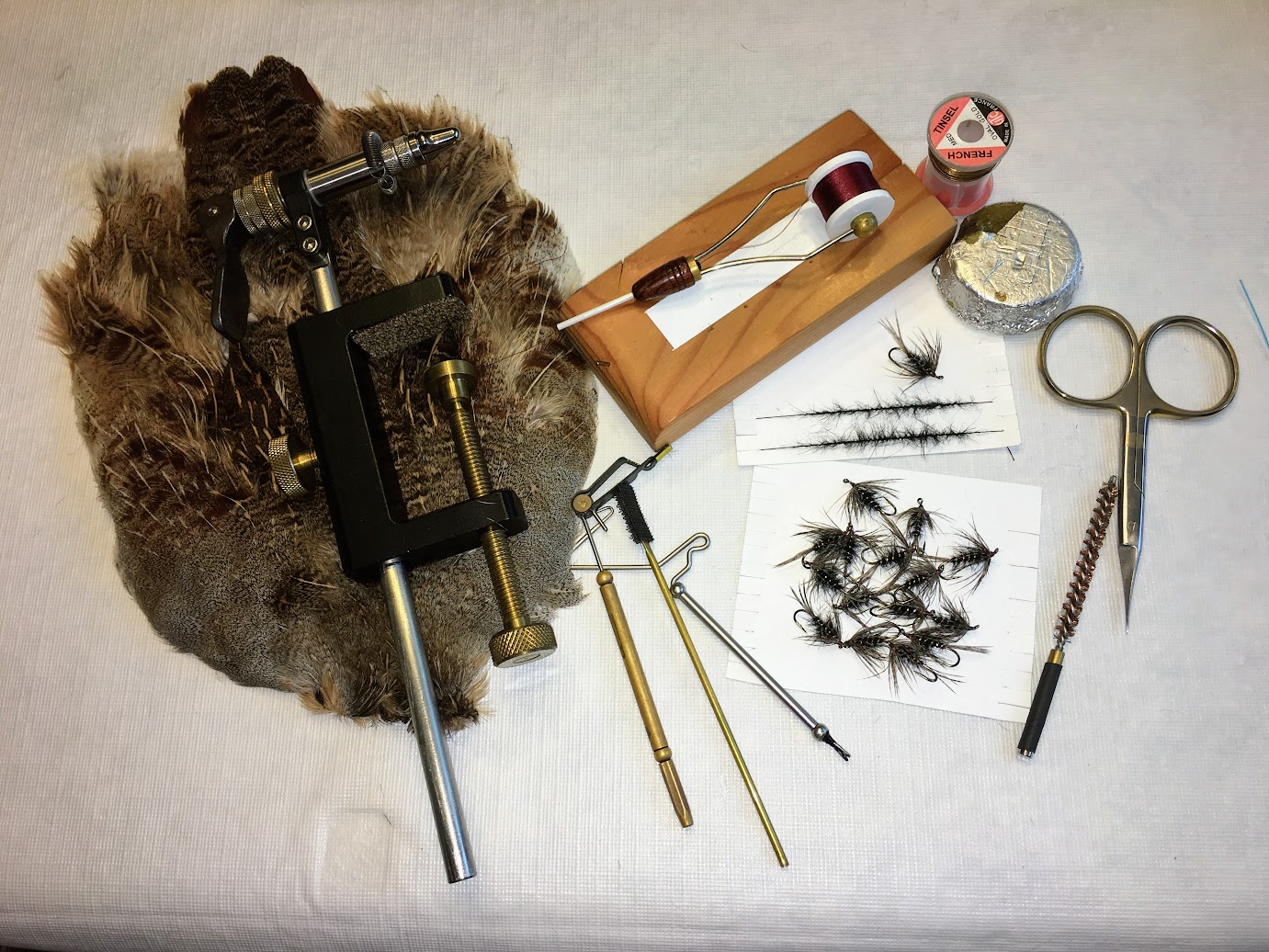 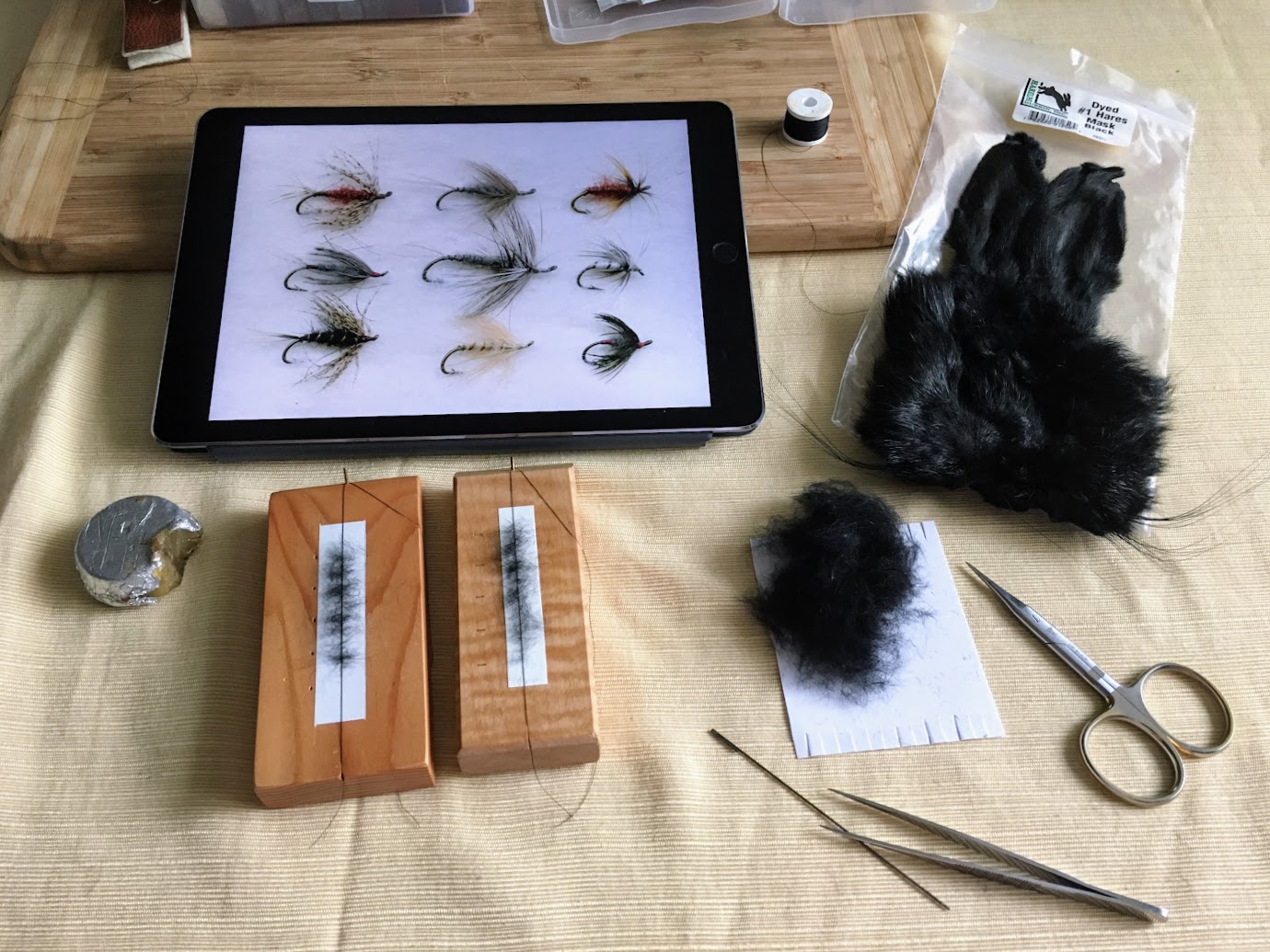 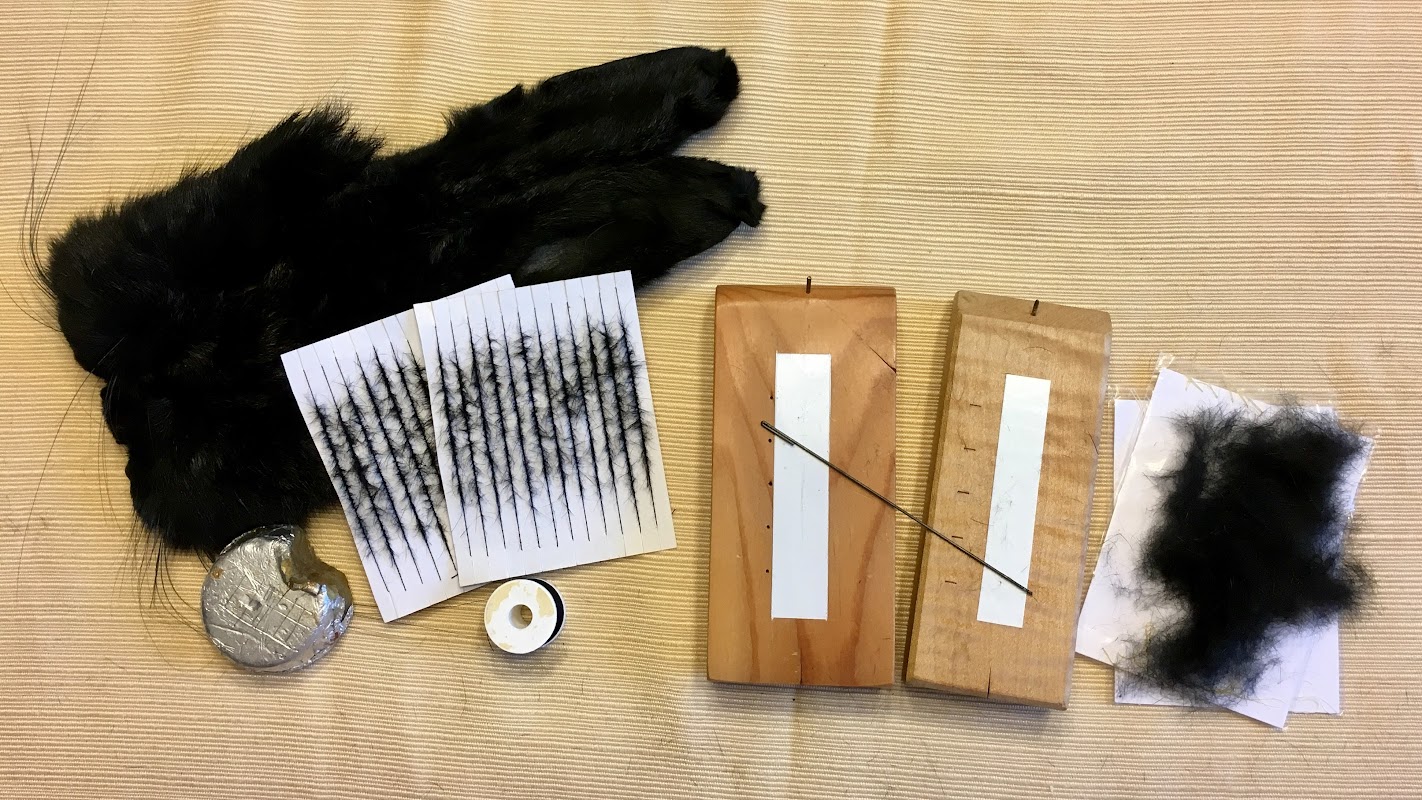 Pull hackle feathers from partridge skin, and prepare the feathers: The feathers are shown left to right, in the phase of preparation. The lefthand feather is as it looks when plucked from the skin. The middle feather has been partially prepared. The fluff at the base of the feather is pulled back and then stripped away. The right feather shows the feather prepared for tying. 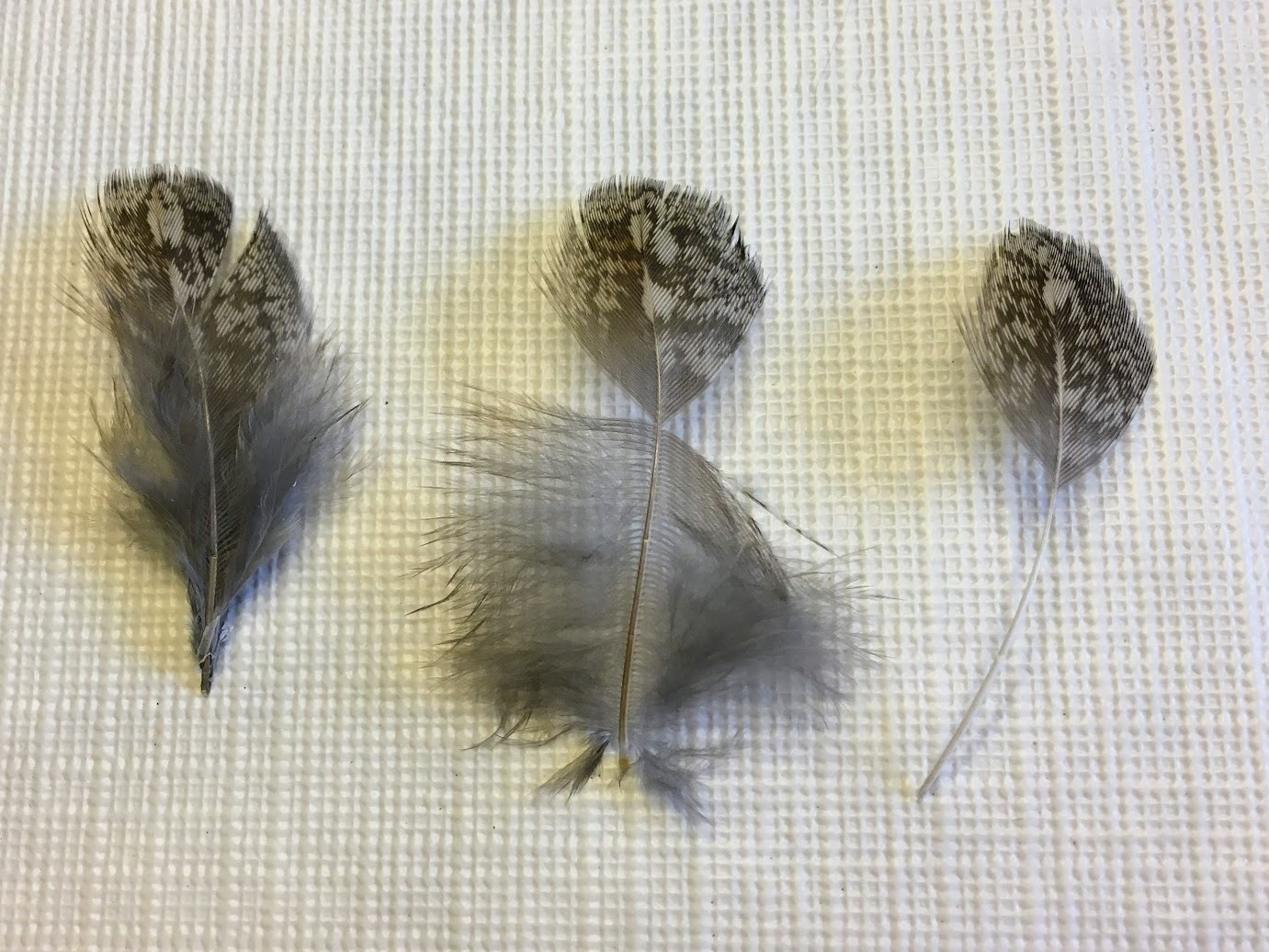 I usually will do all of the feather preparation as on step. My work process is shown left to right. The left hand pile are natural feathers, as the come off the skin. The middle pile is the stripped/prepared feathers. The right hand pile is all the basal fluff (waste) which is stripped off the feathers. 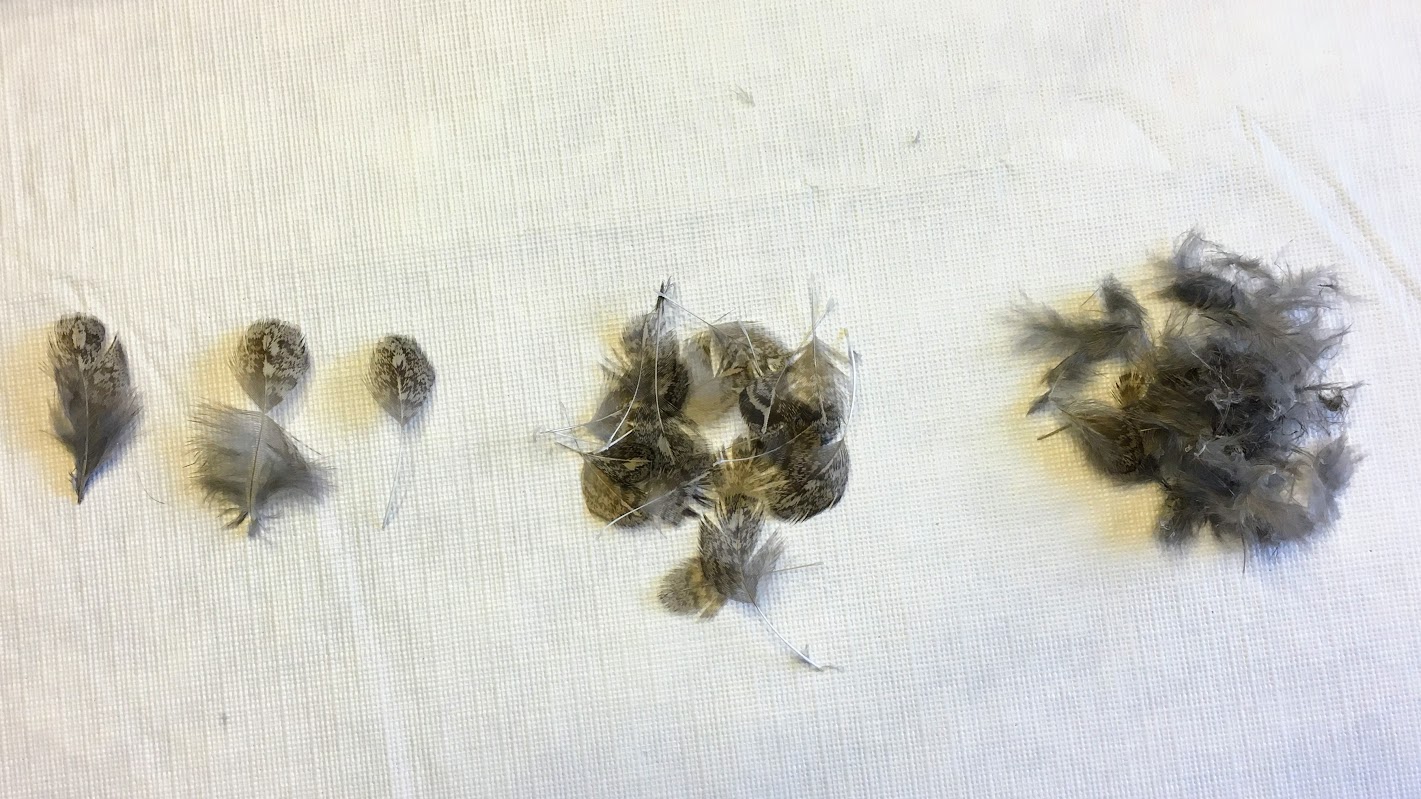 Close up view of the prepared feather. 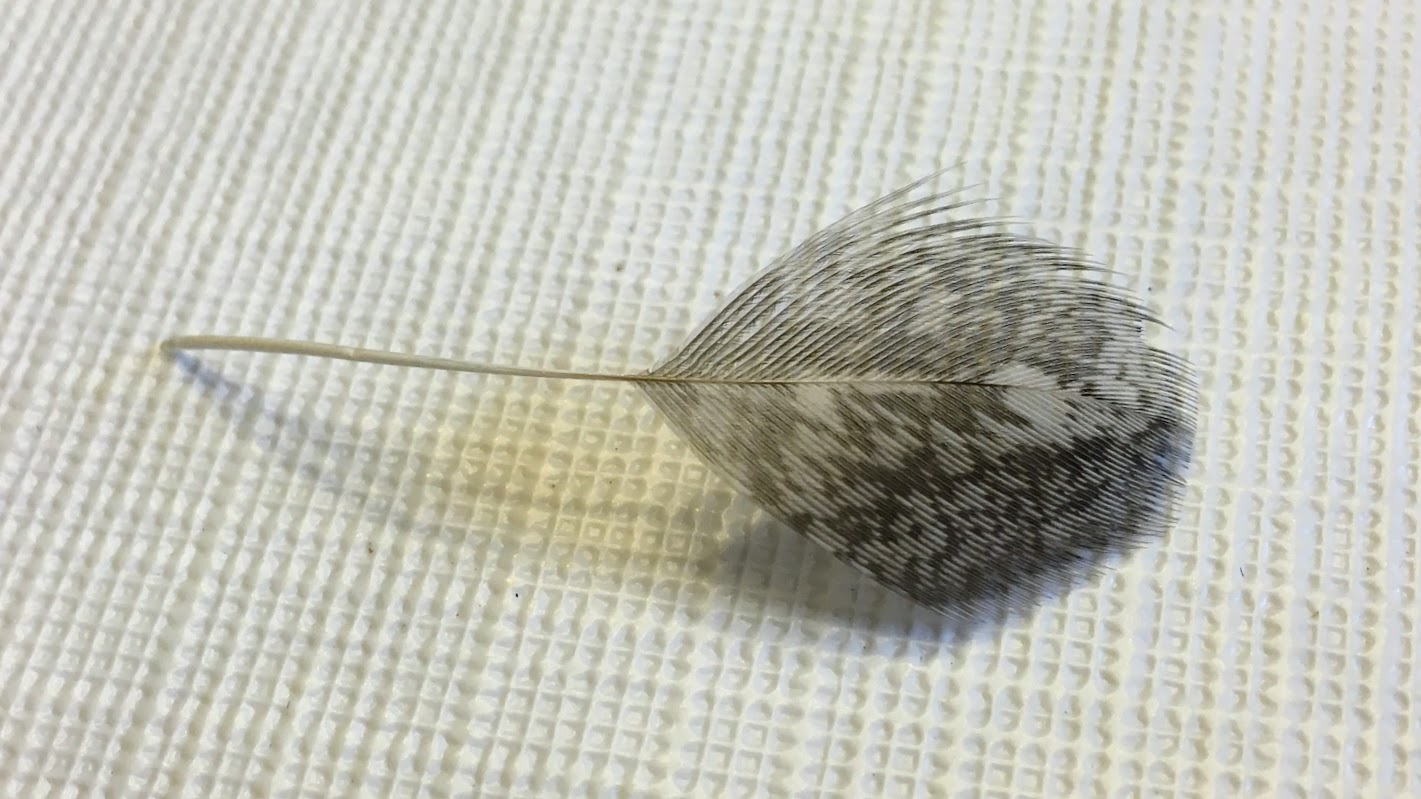 Last weekend I was rereading Jim Leisenring's book and noticed a description where he would wet the central tip fibers with saliva and roll them into a bunch (as shown below). He clearly mentioned tying feathes in by the steam and using the tip fibers as the grip point for the hackle pliers. 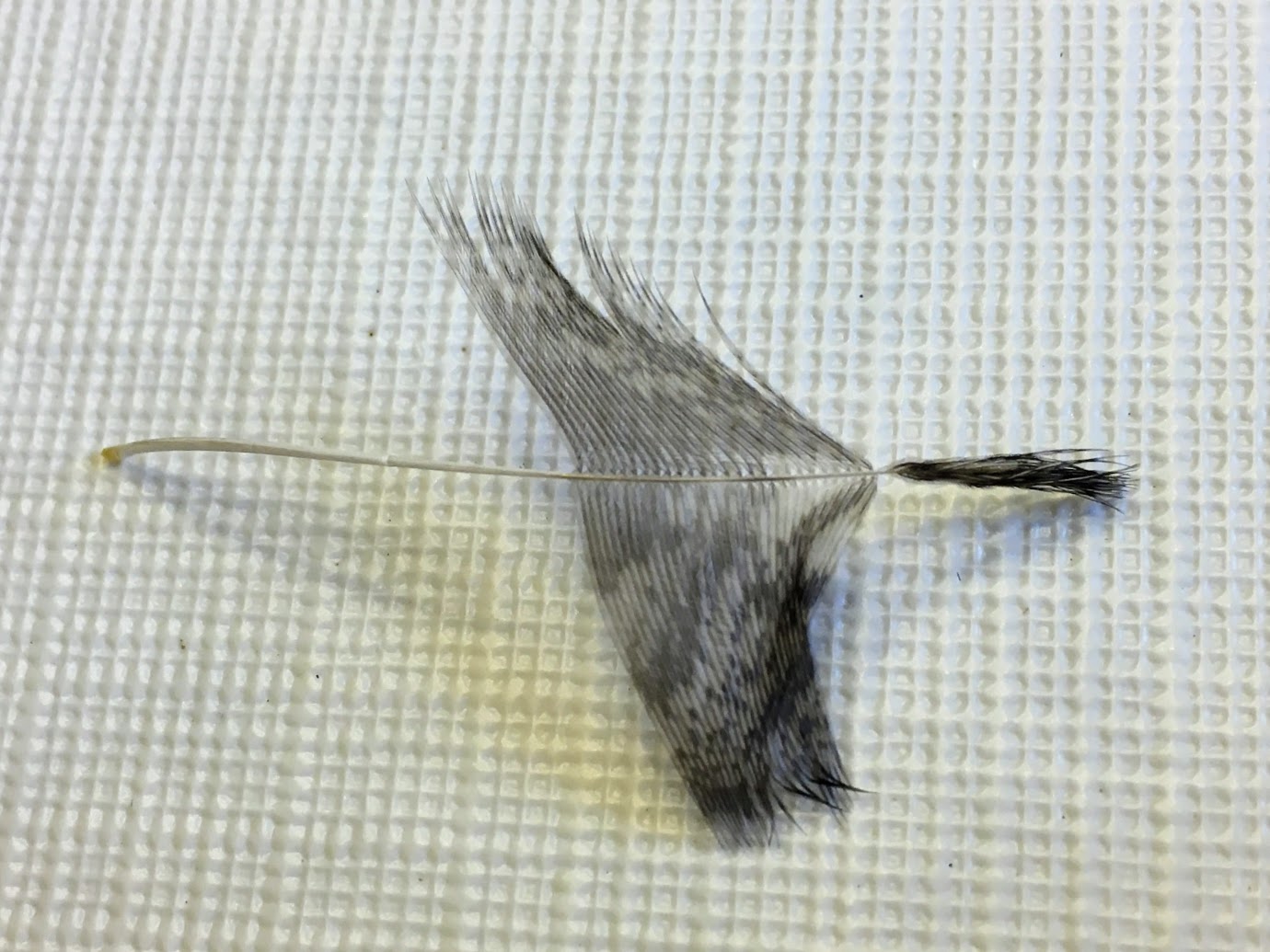 Materials prepared and assembled for tying. 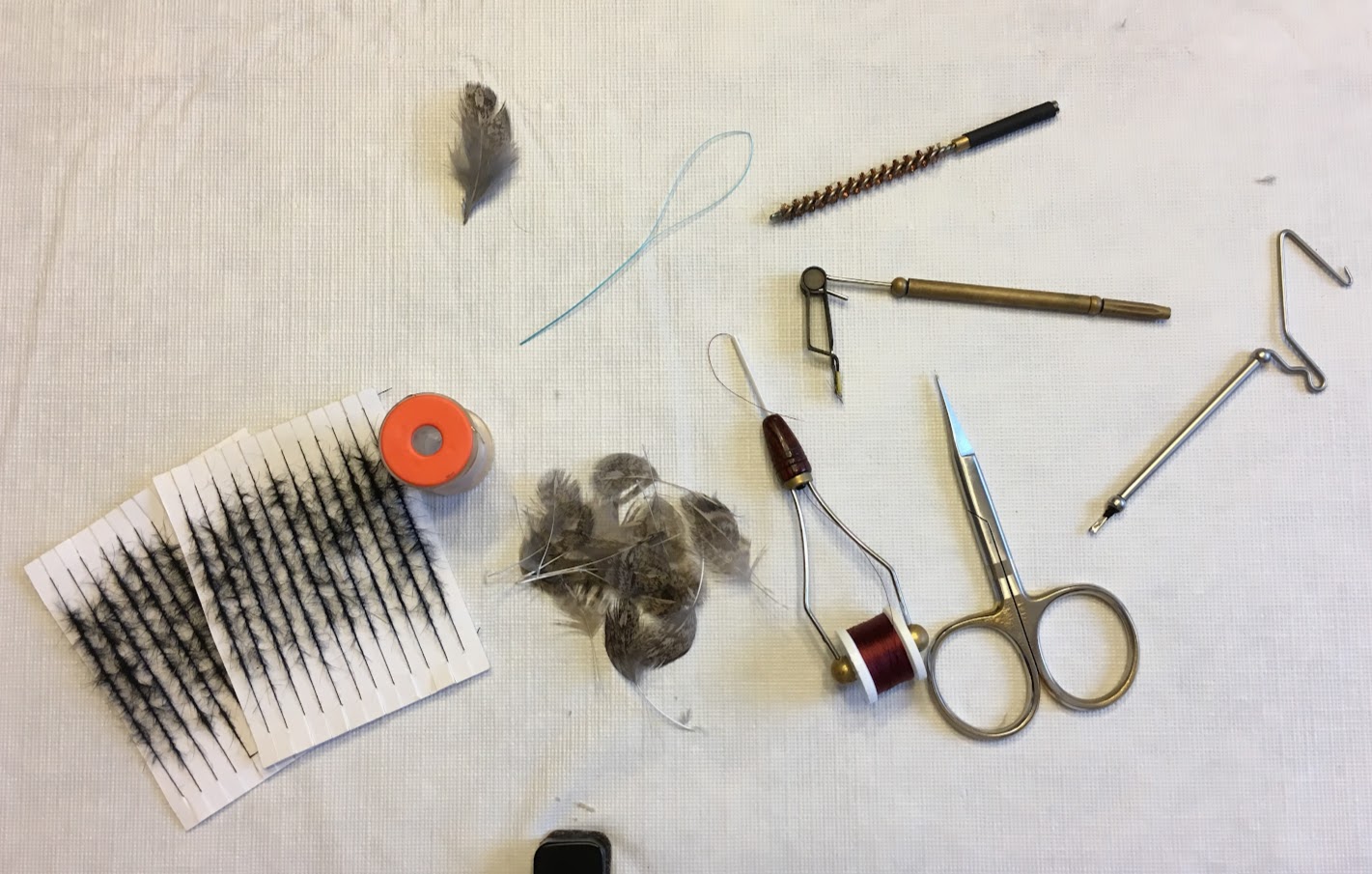 TYING SEQUENCE/MAJOR STEPS:
1) Wax thread
2) Mount hook in vice, and attach the tying thread. I like to attach the thread roughly one hook eye back on the hook shank (leave roughly 1/8" of bare hook shank for the tapered head). I make five firm wraps of well waxed thread, to mount the thread. Leave the tag end hanging out over the bend of the hook.
3) Tie in the hackle feather by the stem, with three firm wraps of thread.
4) Tie in the spun body 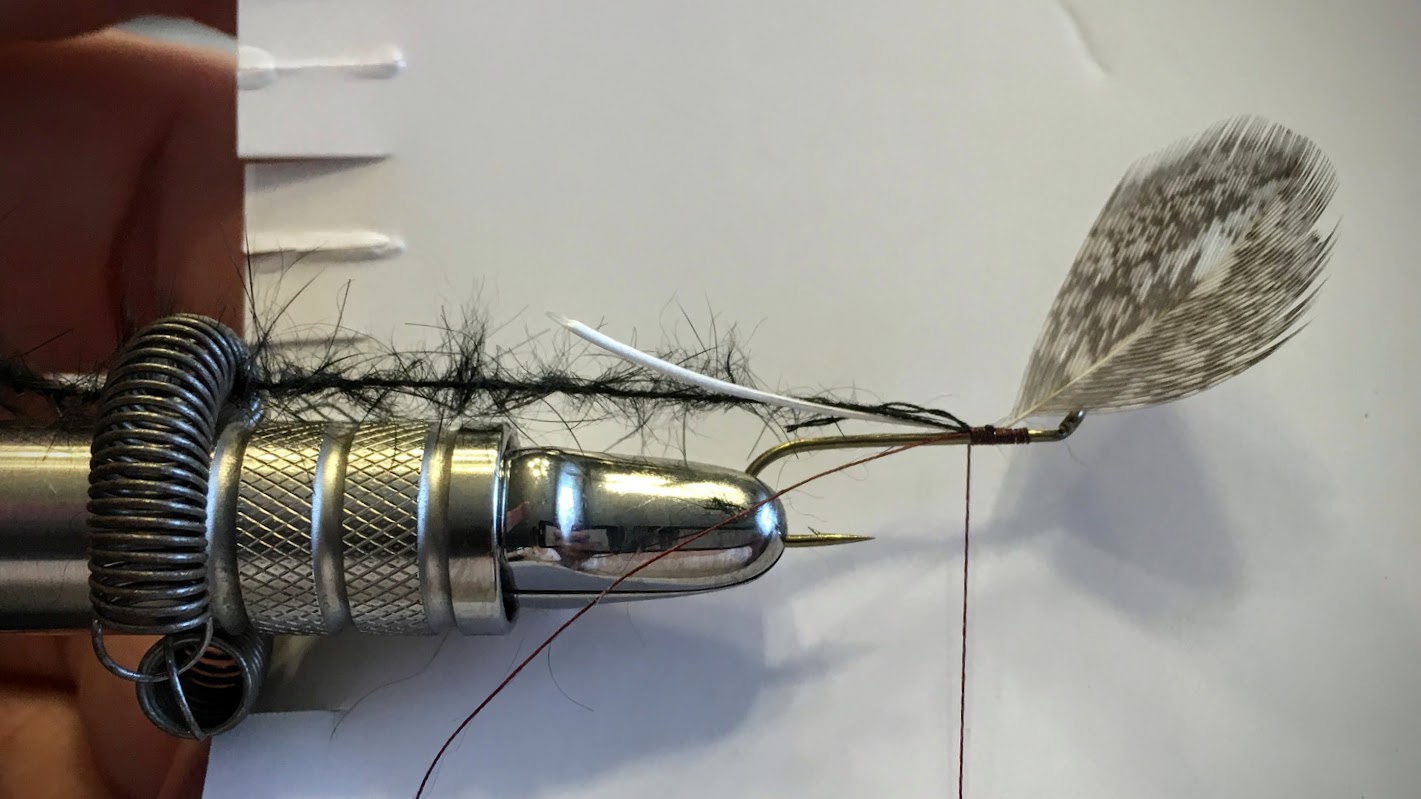 SPECIAL HIDDEN STEP - To form the underbody of the fly, I found it helpful to fold the end of the spun body over the thread and wrap it down over the top of the hook shank. If you look closely at the photo, you can see the tag end of the silk body hanging under the stem of the feather. The strands of silk were folded back over the tying thread, then tyed in using the tying thread. Including this step helps build up the under body, forming the foundation for the body taper. 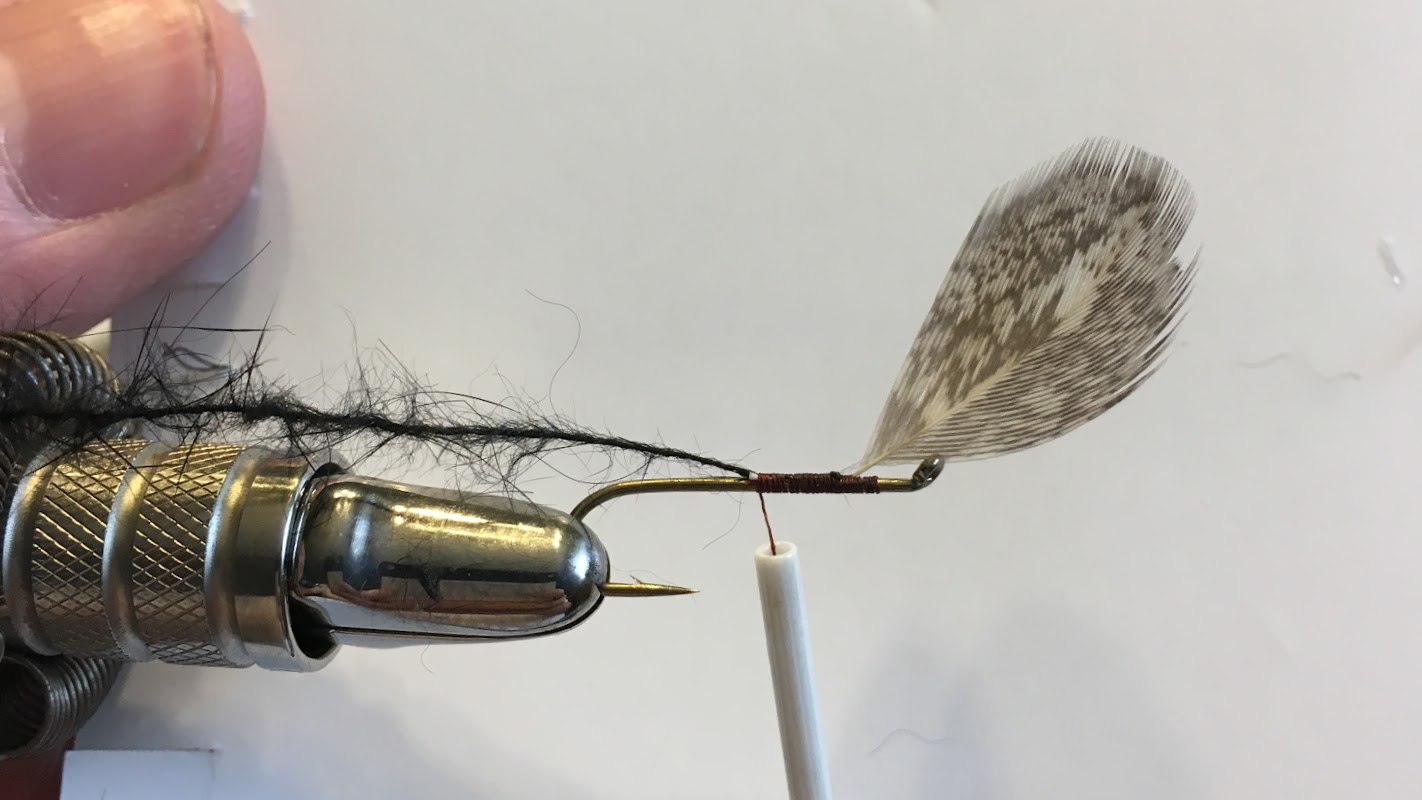 7) Pull the spun body forward and make several more wraps back towards the bend of the hook. Stop at roughly the barb of the hook. 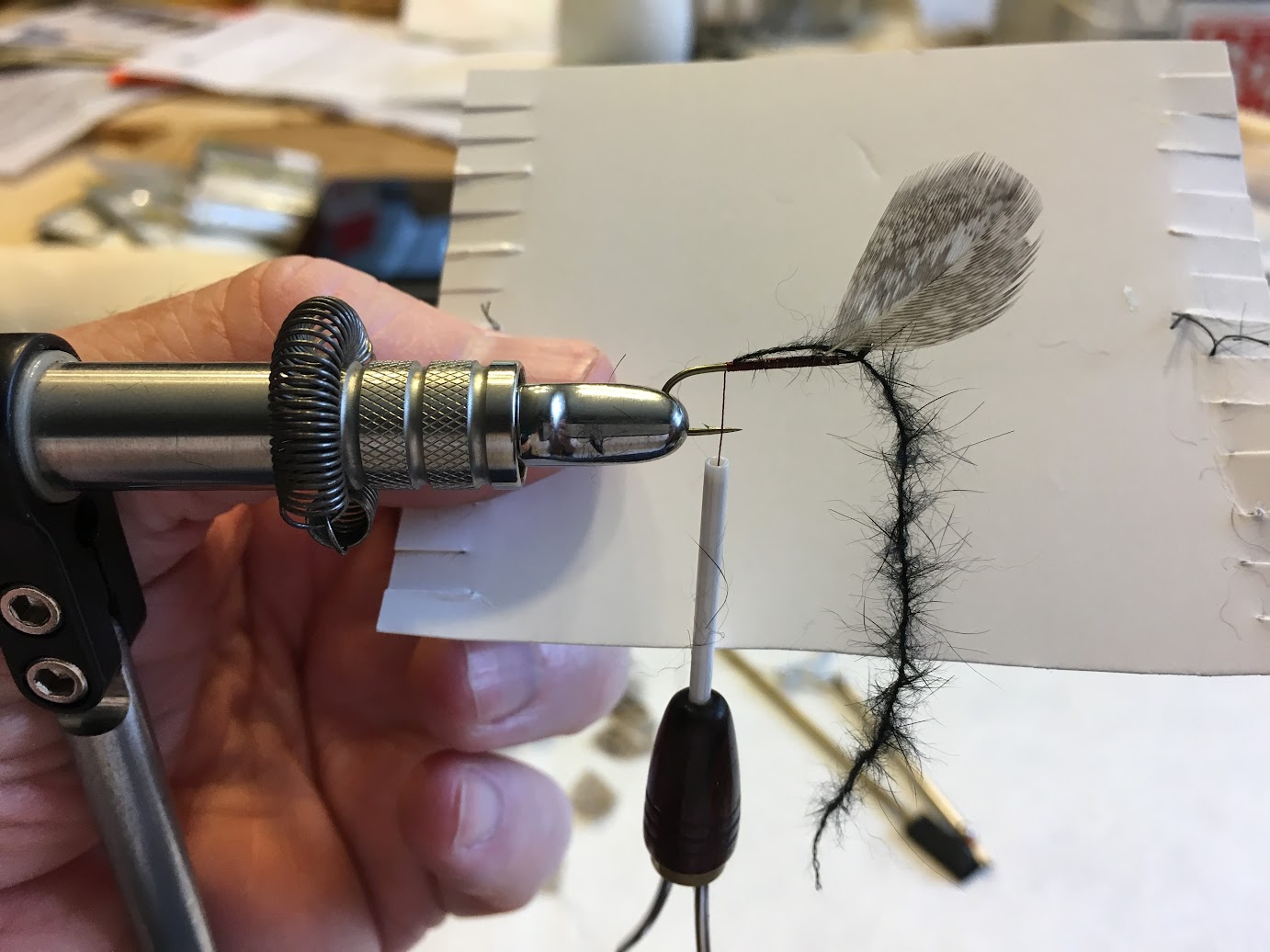 8) Tie in a small bundle of tail fibers
9) Tie in the metal tinsel rib
10) Pull the spun body back over the tail and wrap the tying silk forward to the hackle feather. 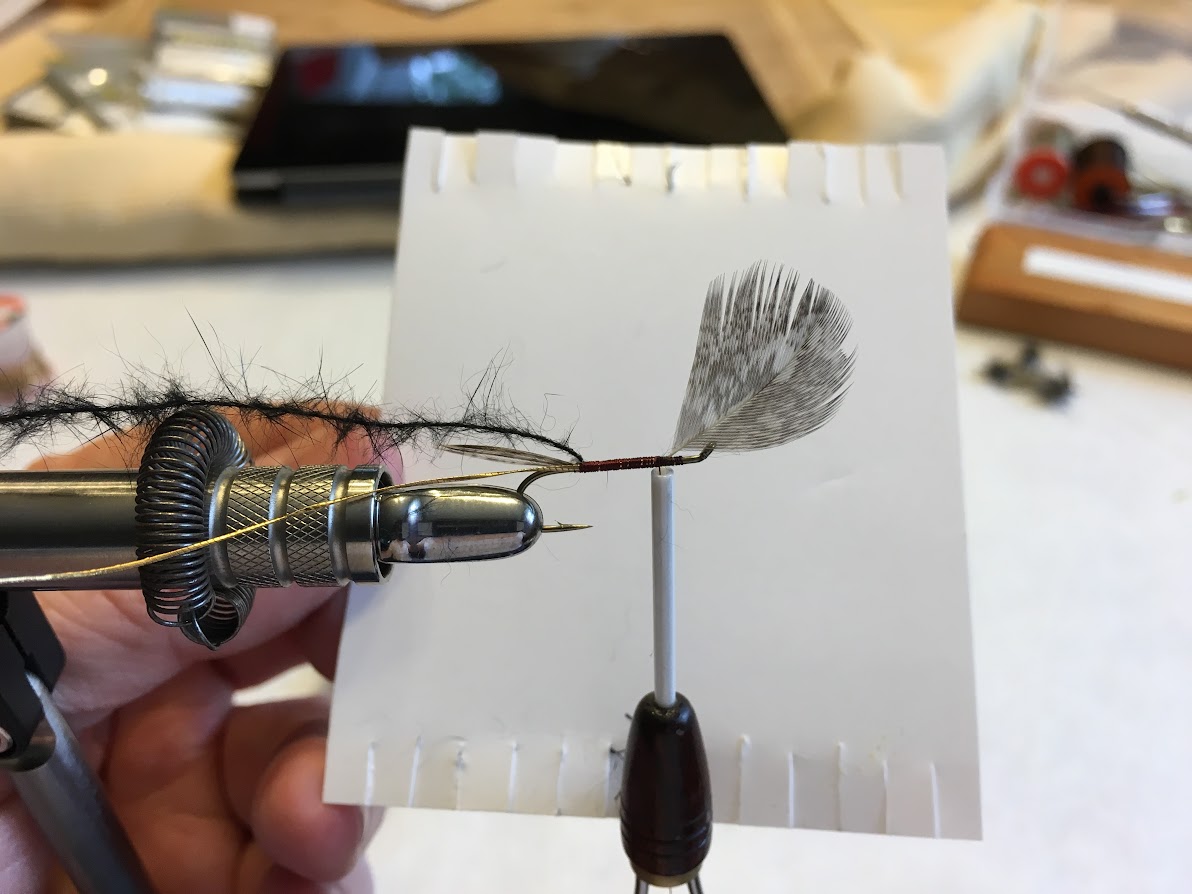 11) Wrap the spun body forward to the awaiting tying thread and tye off. 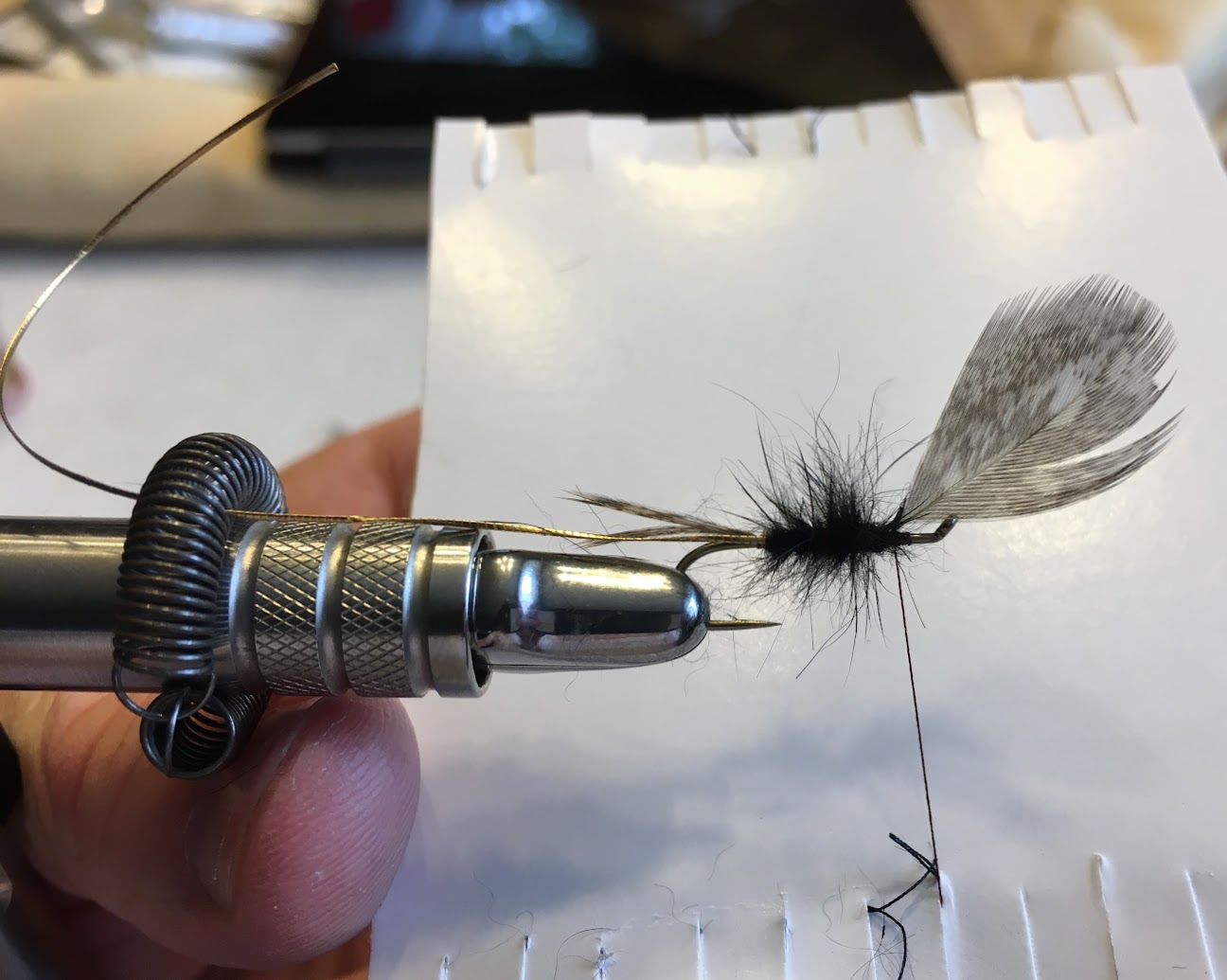 12) Wrap the tinsel rib in five or six open spiral wraps. Tye off under the hook shank, in front of the hackle. 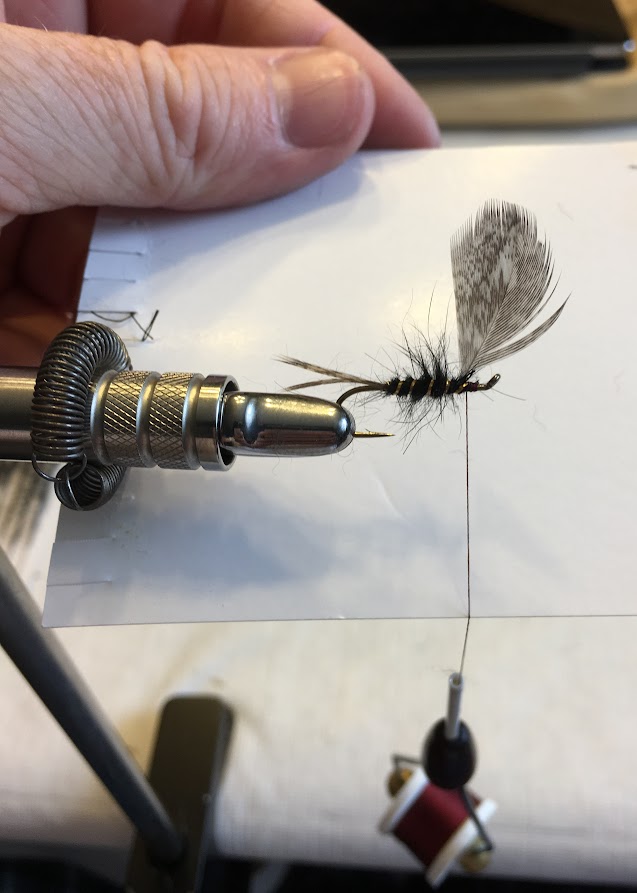 13) Grasp the tip of the feather in a hackle pliers, fold the feathers back, then wrap the hackle forward in closely touching turns. After two or three full wraps, tye off and clip out the hackle tip.
14) Wax the thread again before finishing the fly. Whip finish the head, forming a triangular shaped tapered head. 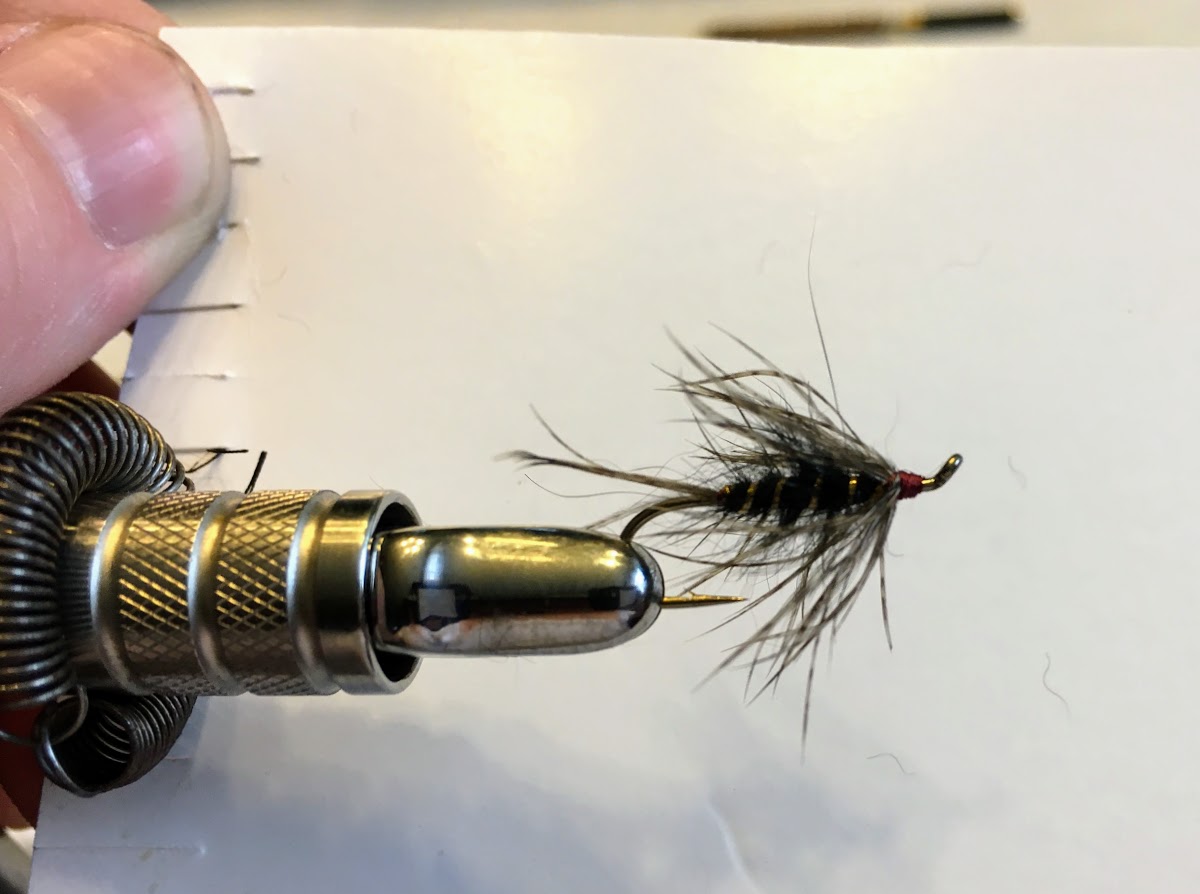 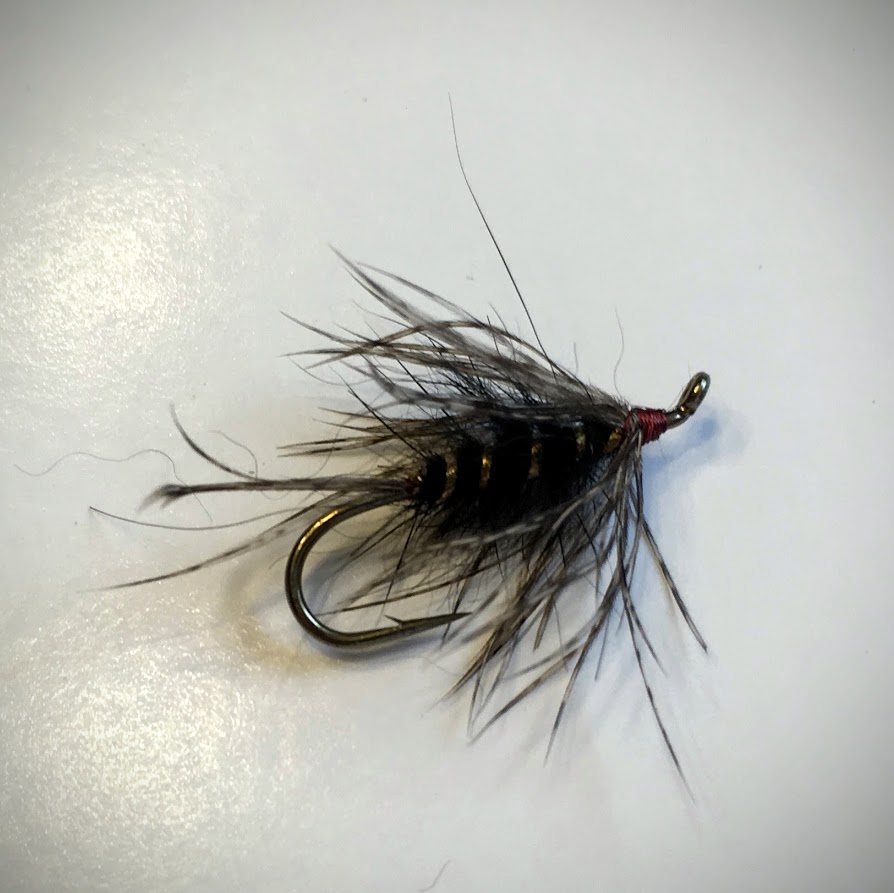 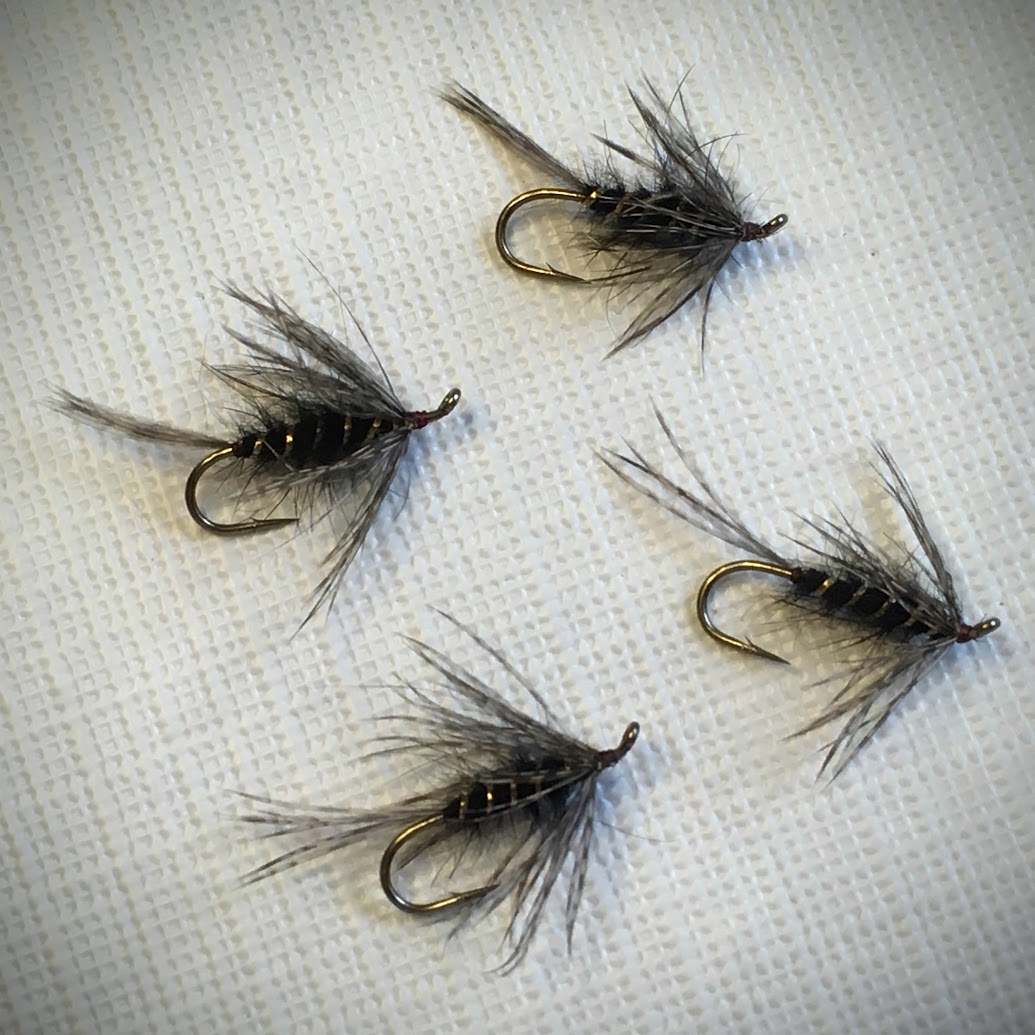 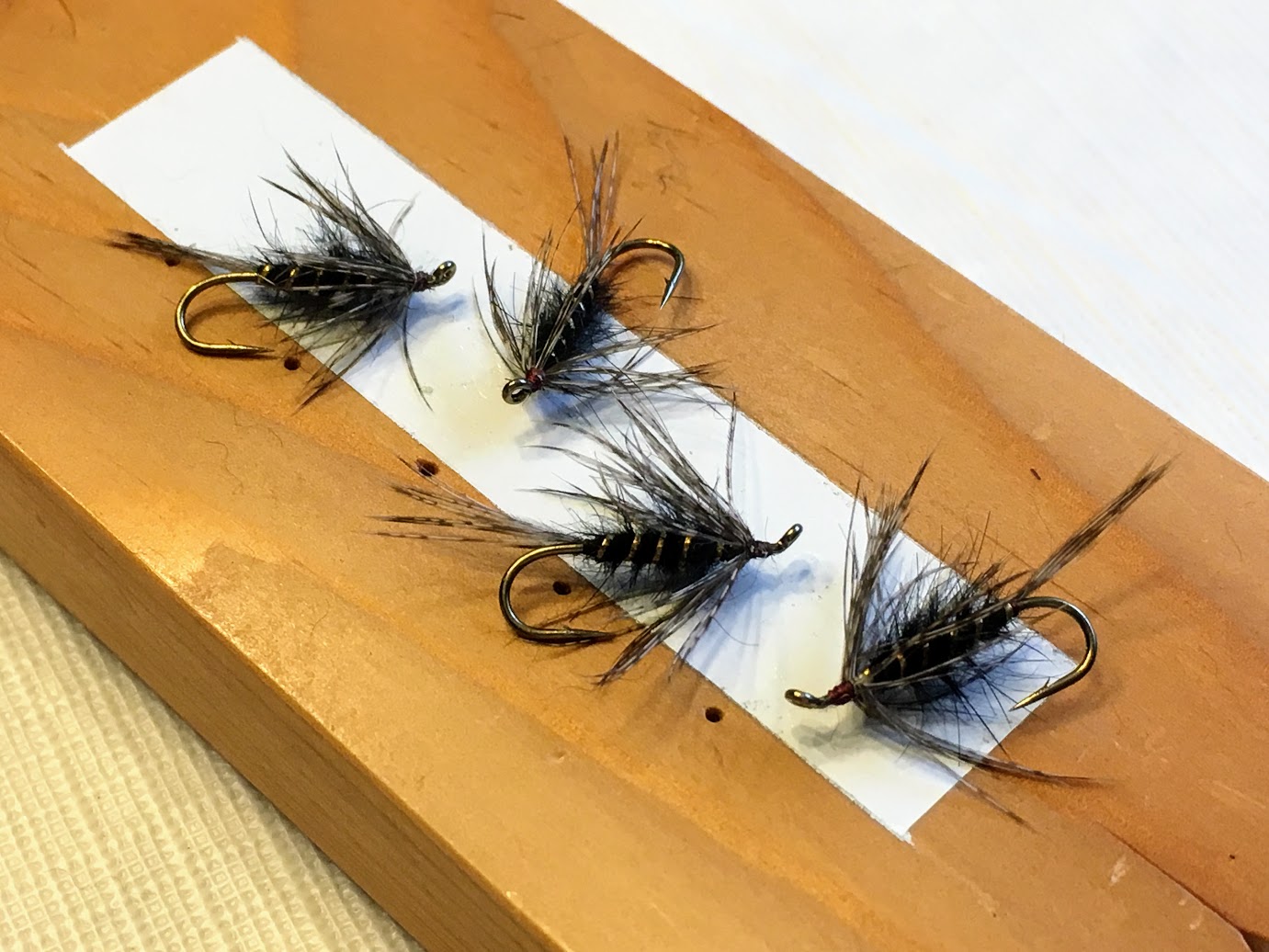 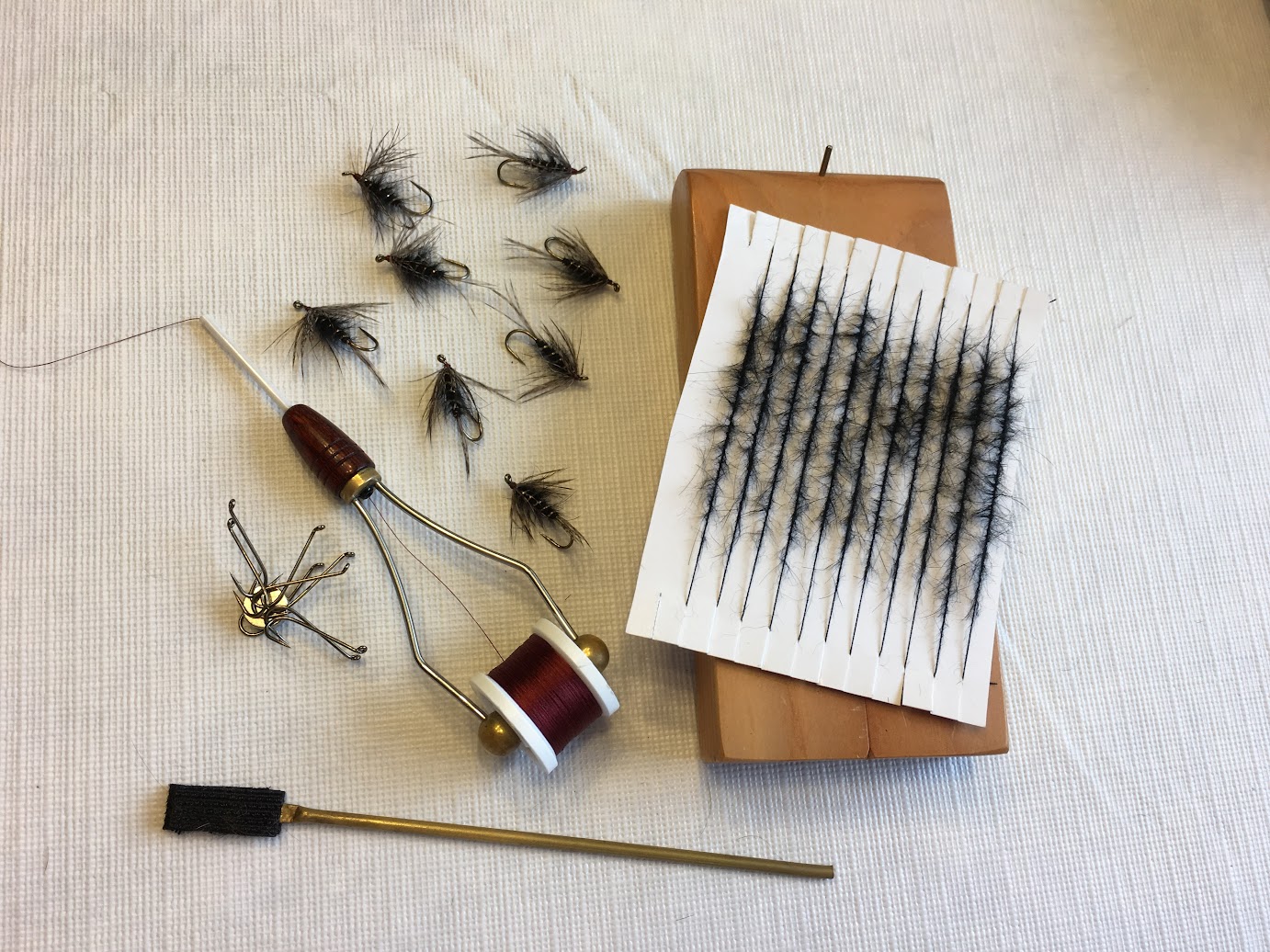 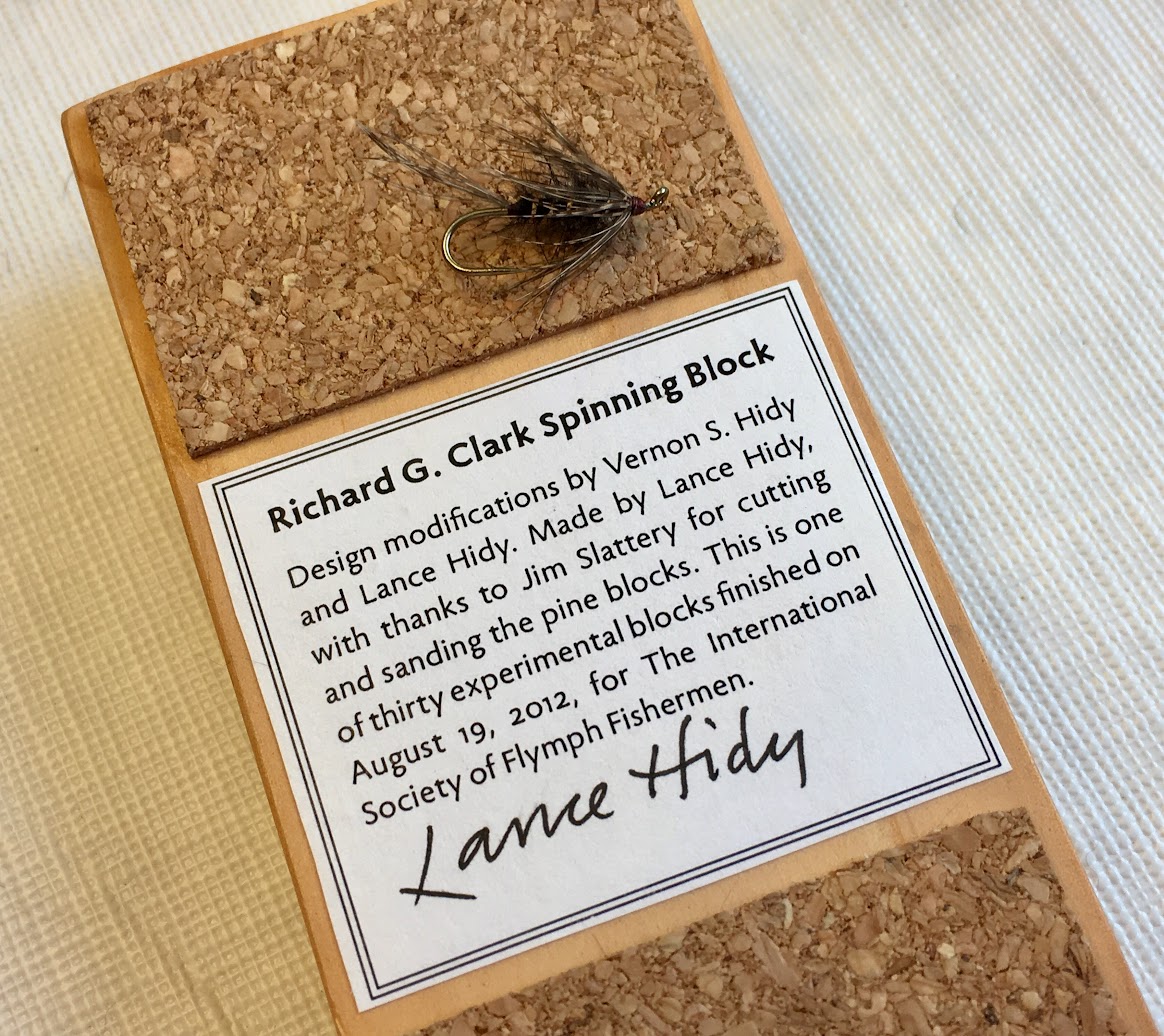 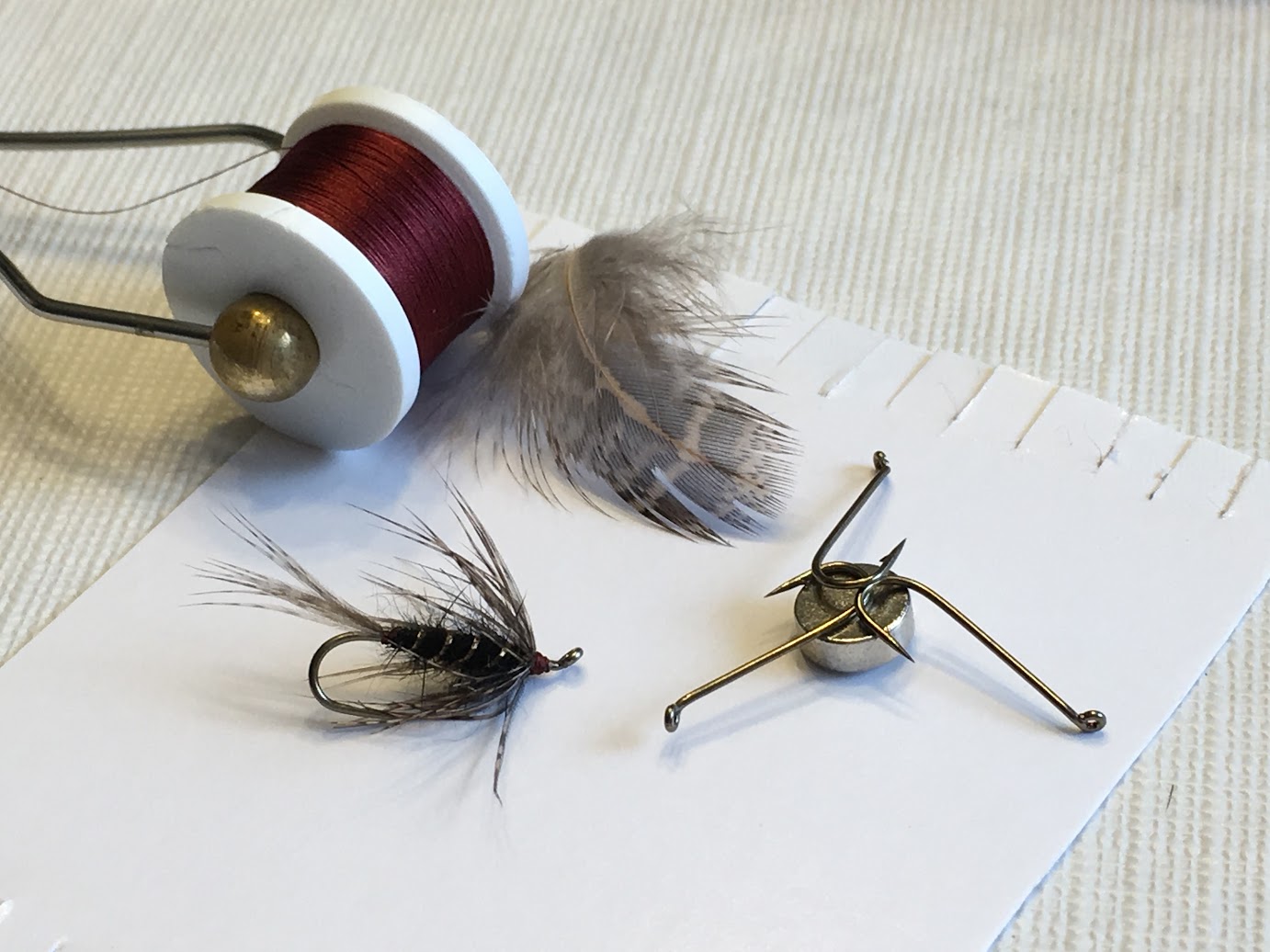 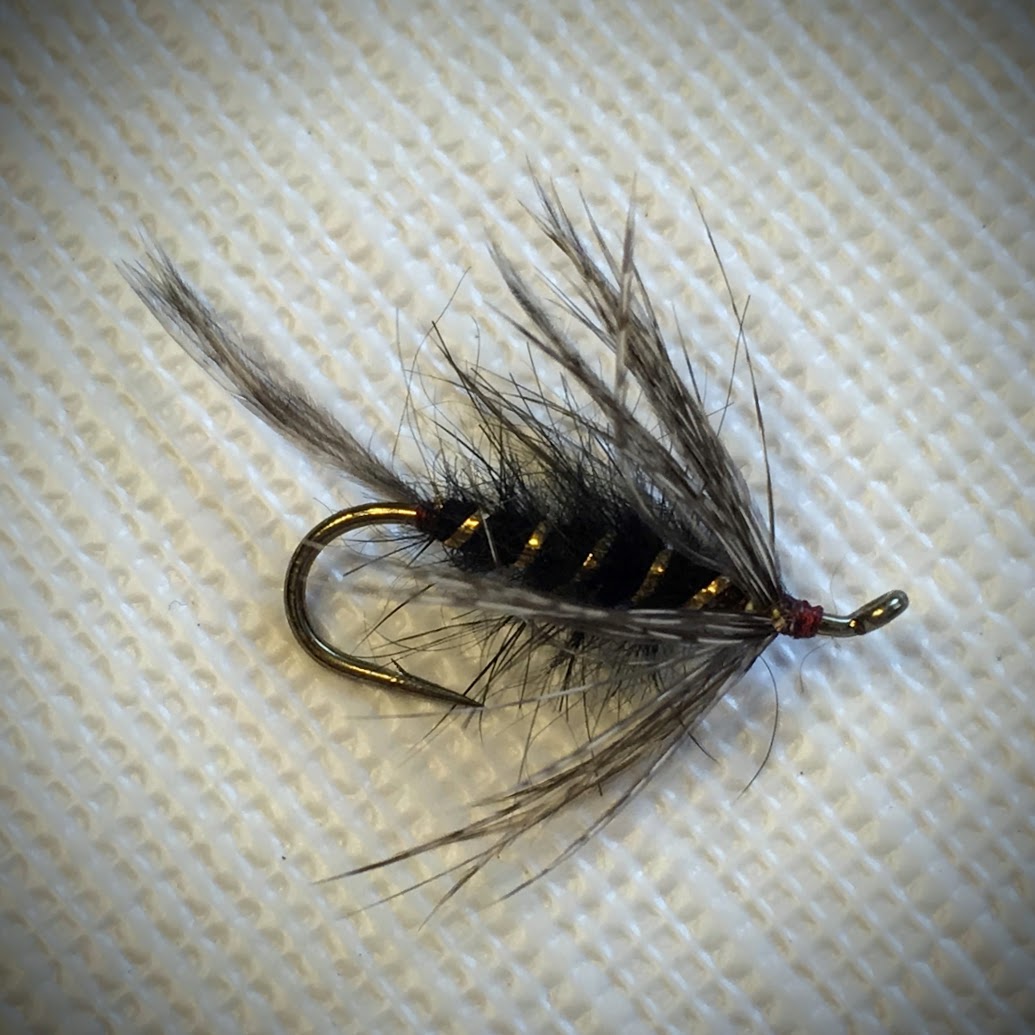 Holy Cow Ray!!
This SBS is awesome! You have backed up most of your steps with some historical insight particularly from Jim and Pete's book, "The Art of Tying....."! One cannot help but feel the presence of these two greats looking over your shoulder and offering suggestions! Your pattern has that great characteristic of the masters, It looks alive!!! Not a greater thing can be said about this! It was Big Jim's primary goal that this feature be right there at the top! This fine tradition has been handed down to Pete and then to Lance and now to you and many others here on the forum and worldwide as well! Thank you so very much for sharing your beautiful step by step with us! It is helping in ways you cannot imagine!
Doug in the Den
Fish when you can, not when you should! Anything short of this is just a disaster.
Top

I'm happy to report that this pattern has been working well for me. 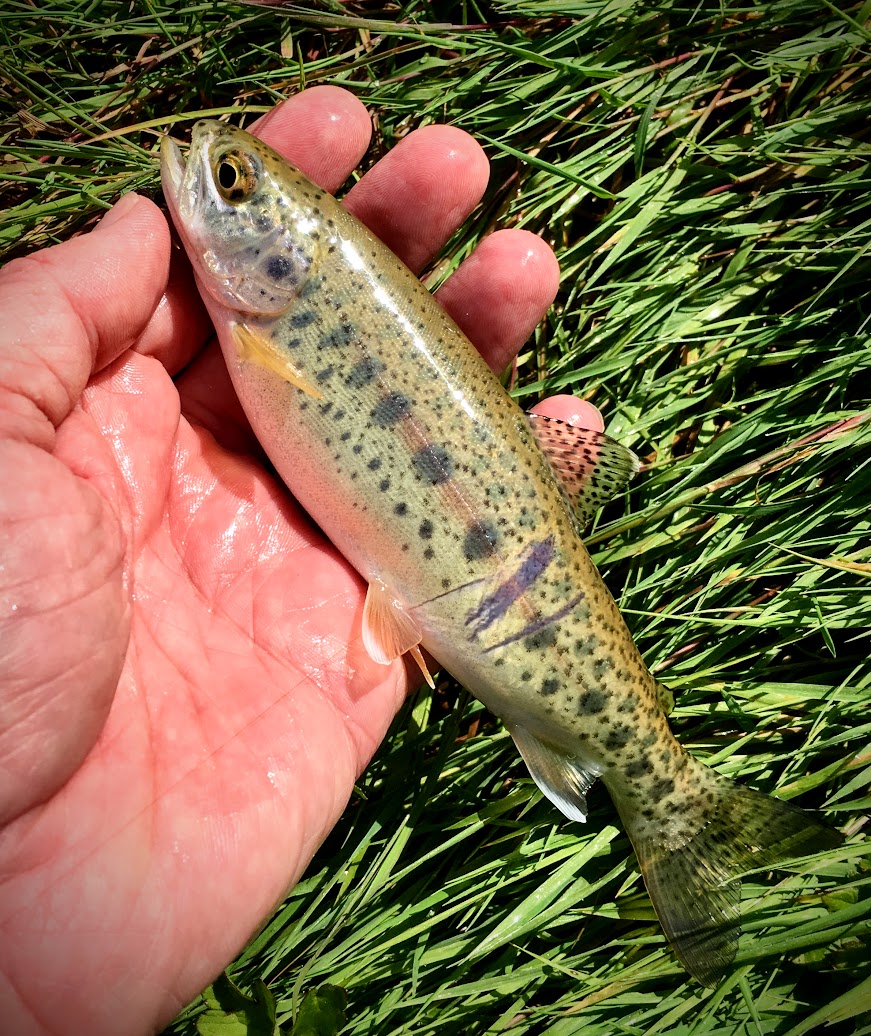 Ray,
That trout is beautiful and I am glad he was convinced that your flymph was indeed good to eat! Again, the tutorial above is just awesome! You really know how to lay the materials out and everything seems to flow well! I have had the great honor to watch you assemble patterns (at Roscoe #1) and there is no doubt that you are a good teacher and a very talented tier!
Thank you for posting these things! It gets our juices flowing for both fishing and tying!
Doug
Fish when you can, not when you should! Anything short of this is just a disaster.
Top
Post Reply
5 posts • Page 1 of 1