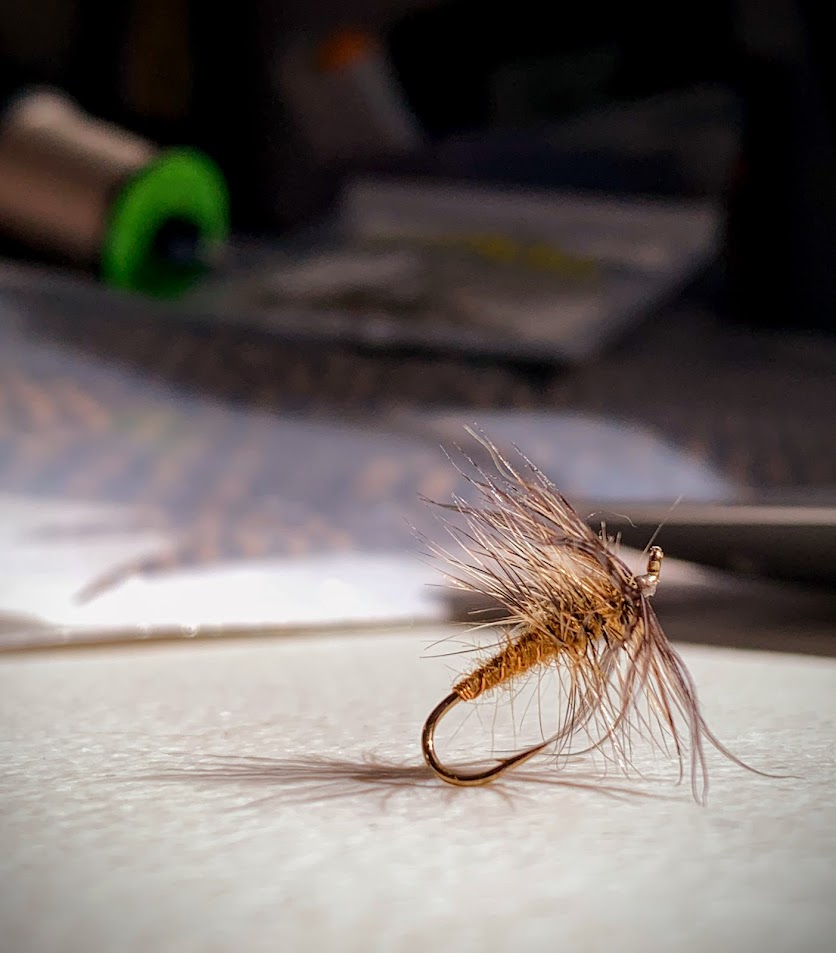 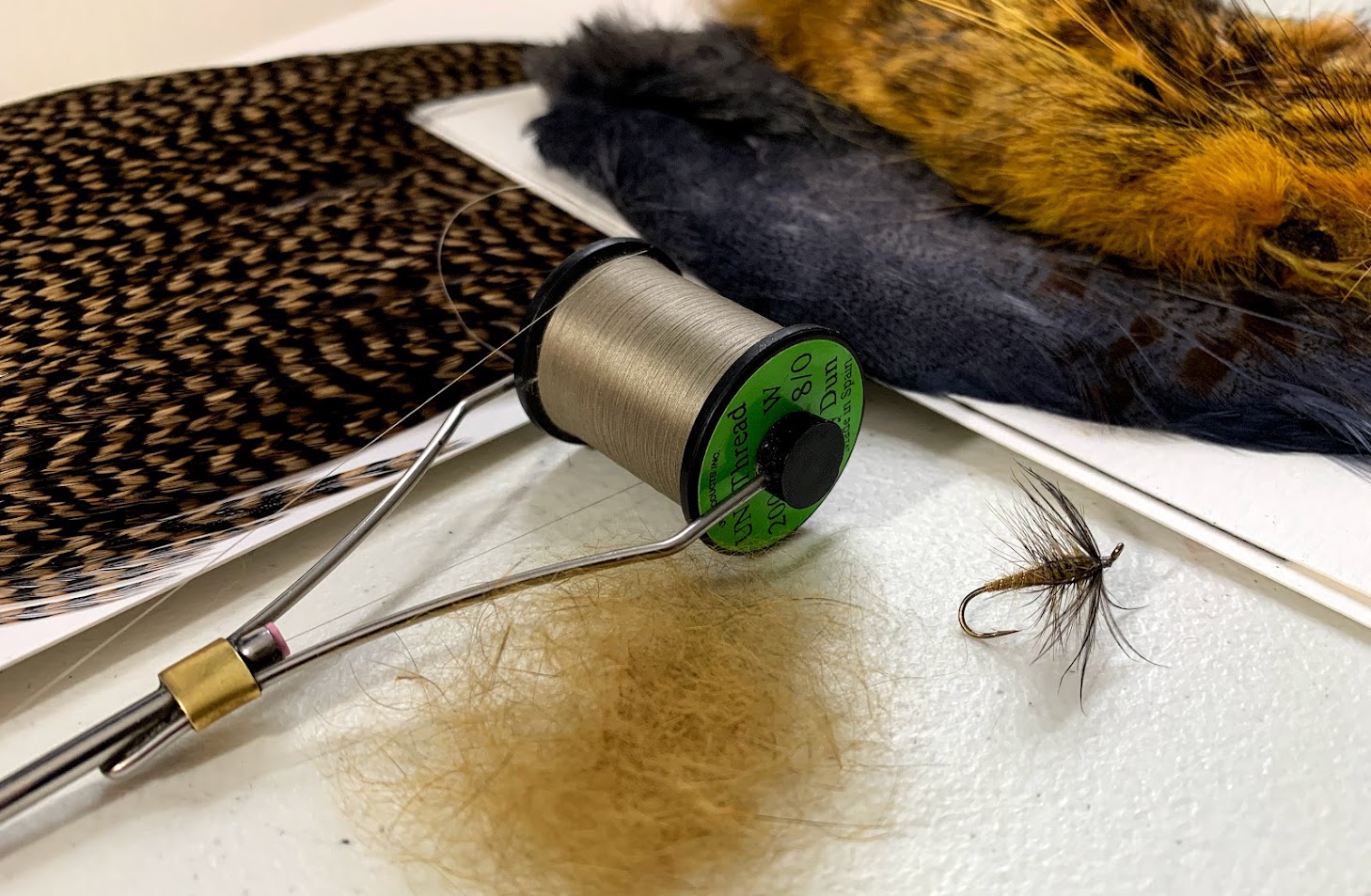 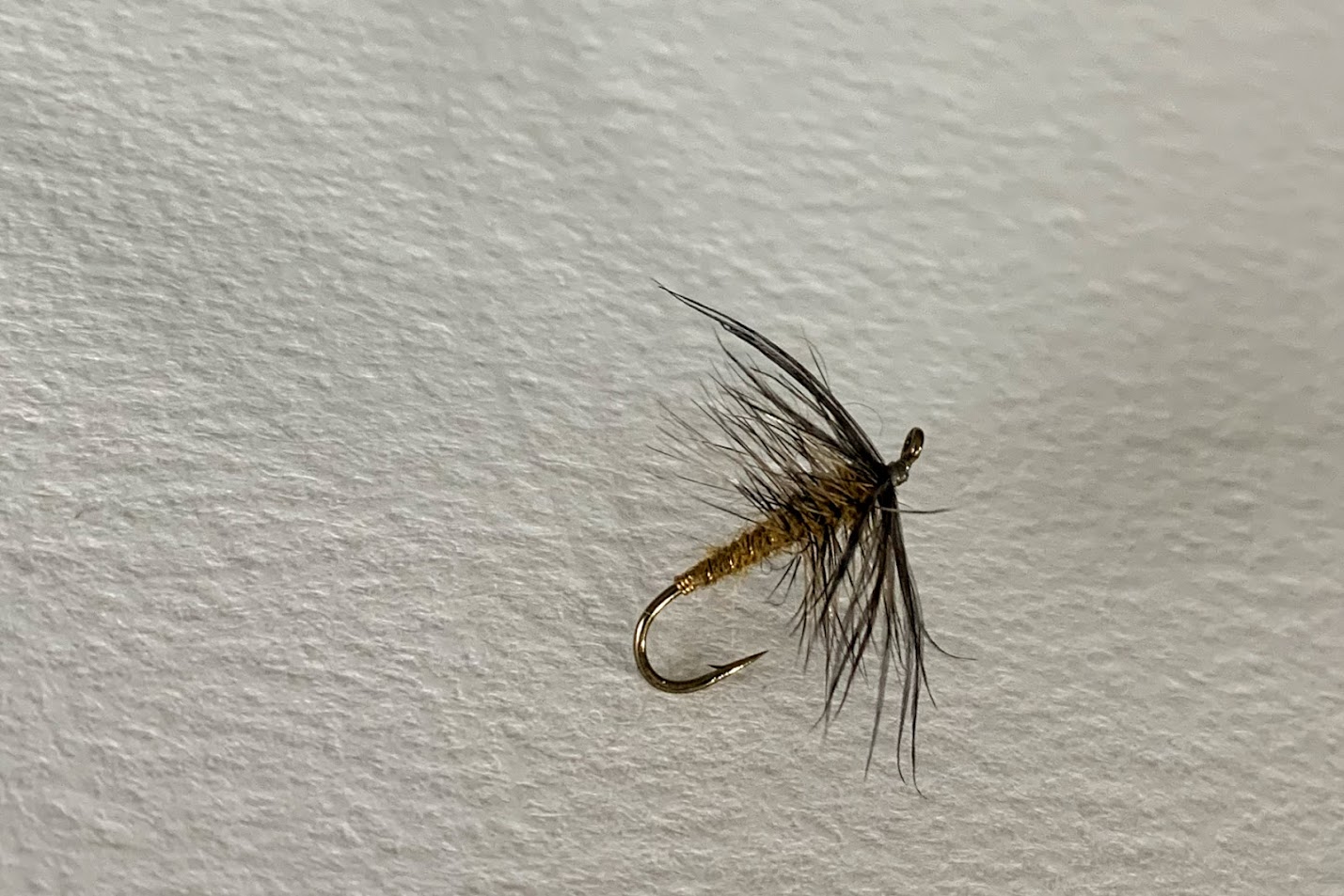 This pattern is intended to be a fly with a wide spectrum of natural colors and tones. I am hoping fish will be able to see whatever color they are looking for in the fly (in many buggy colors / olive-gray-tan-dark blue dun). Hopefully making a good impression, in more ways than one.

PHOTOS OF THE TYING SEQUENCE:
1 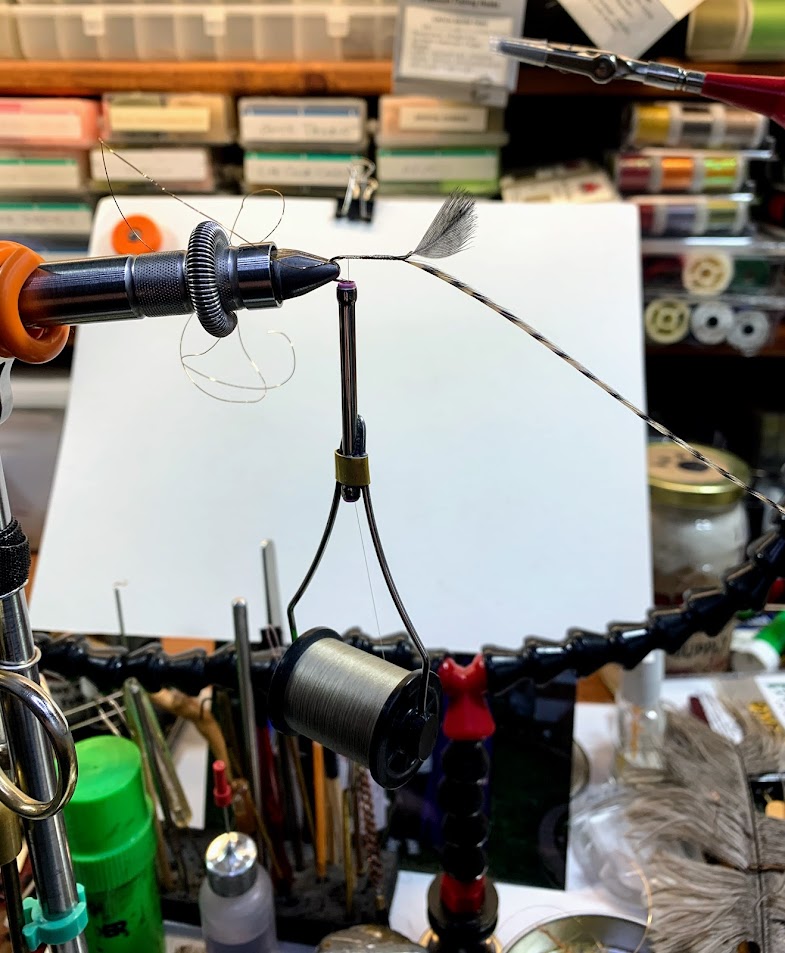 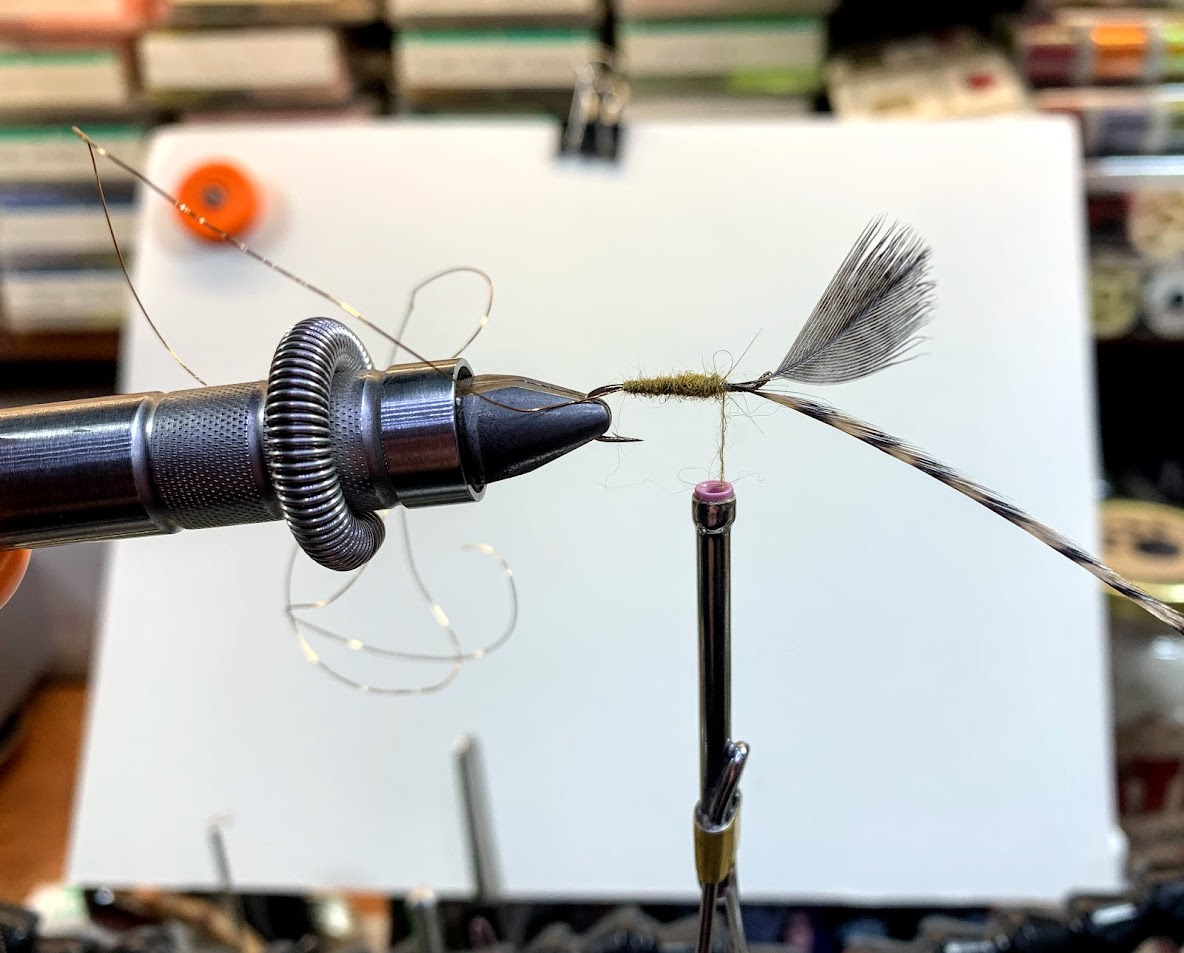 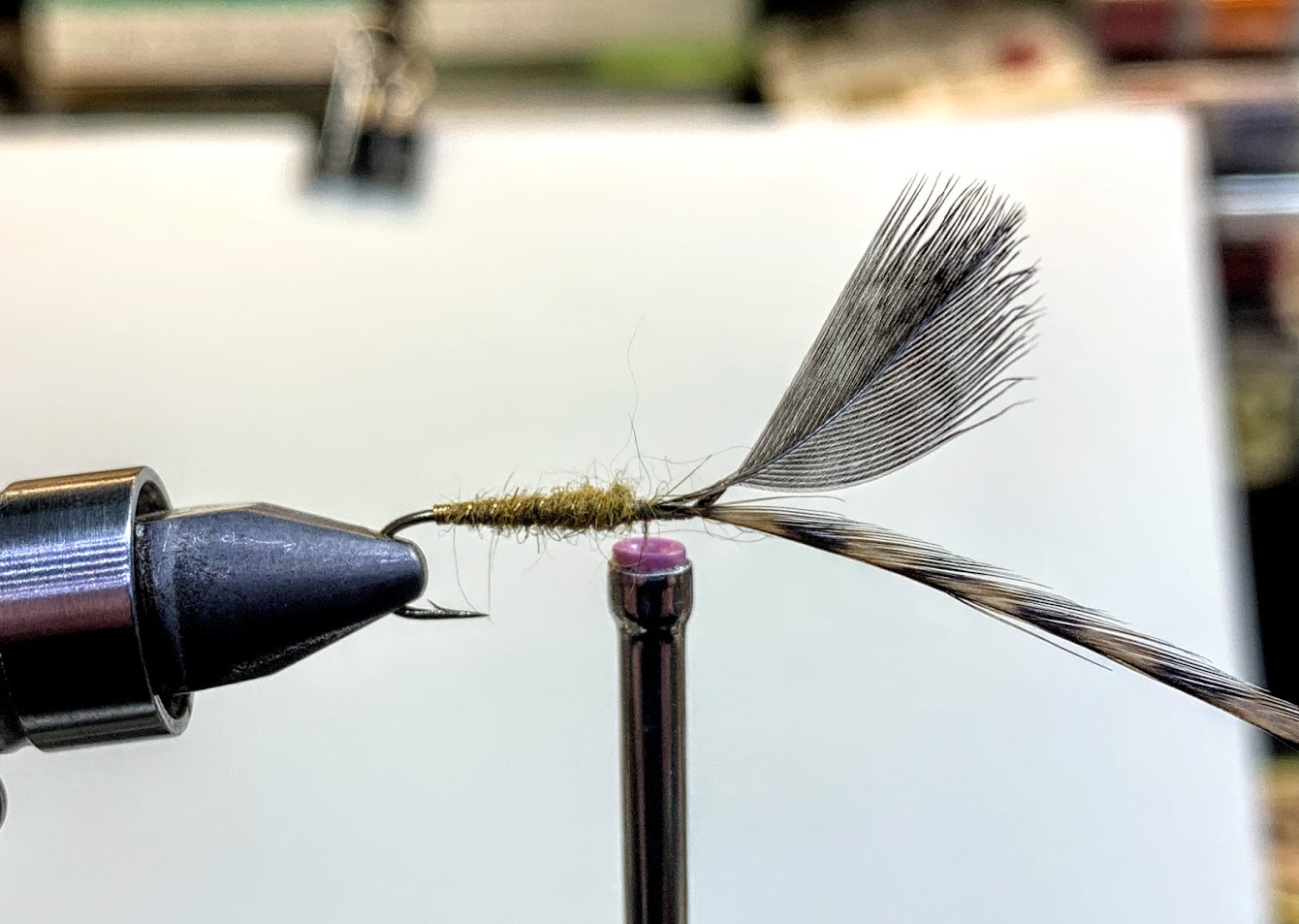 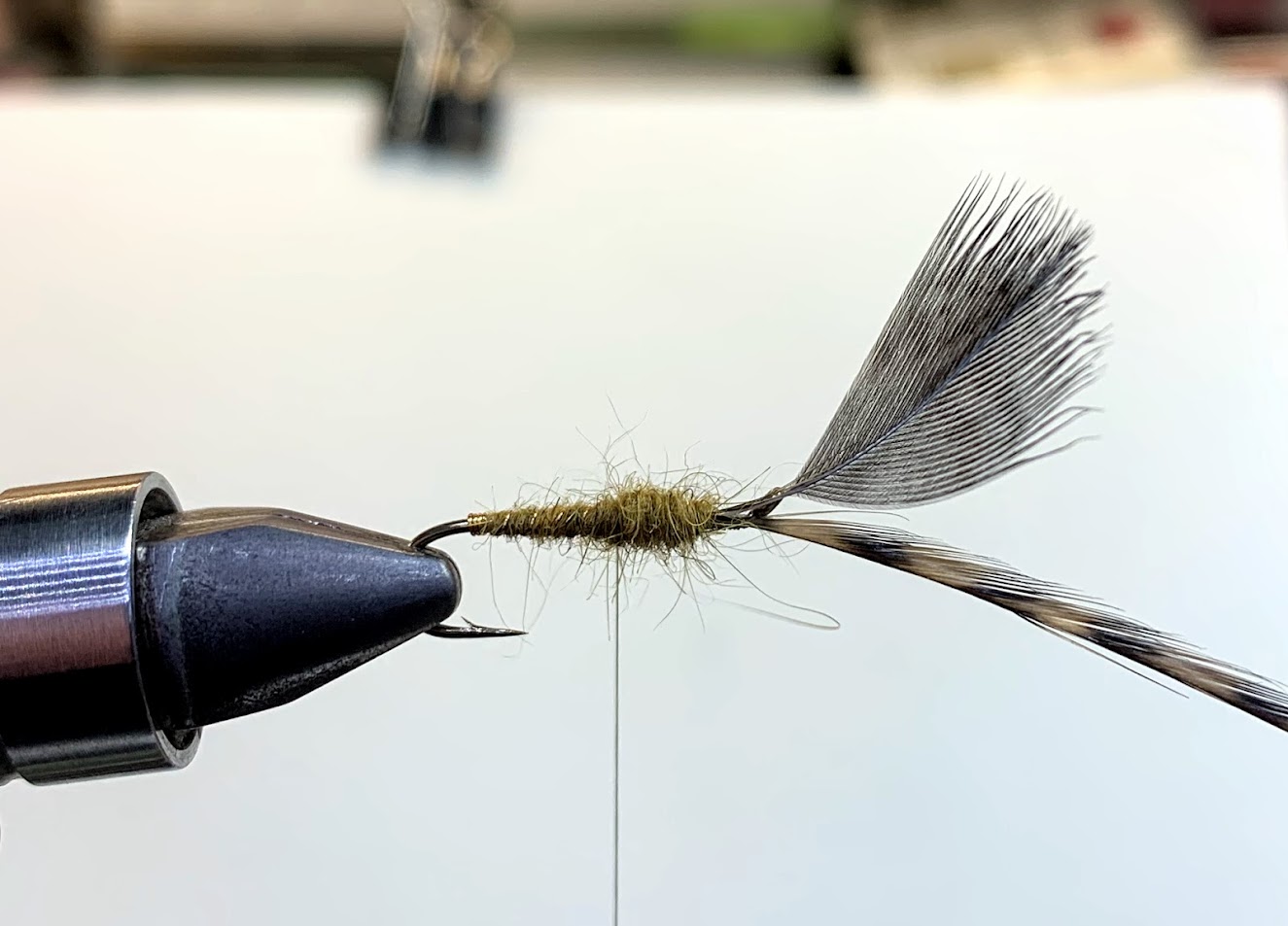 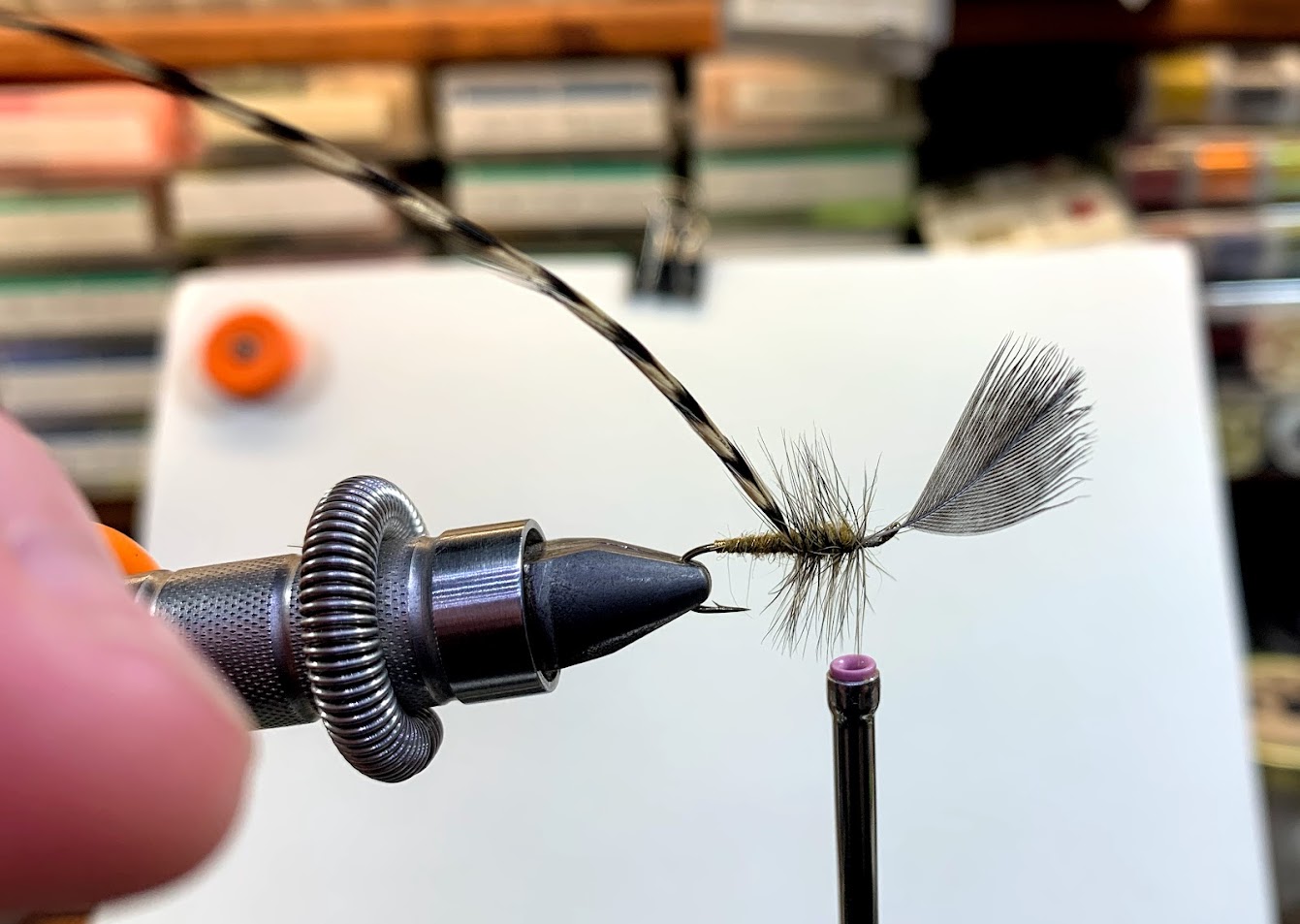 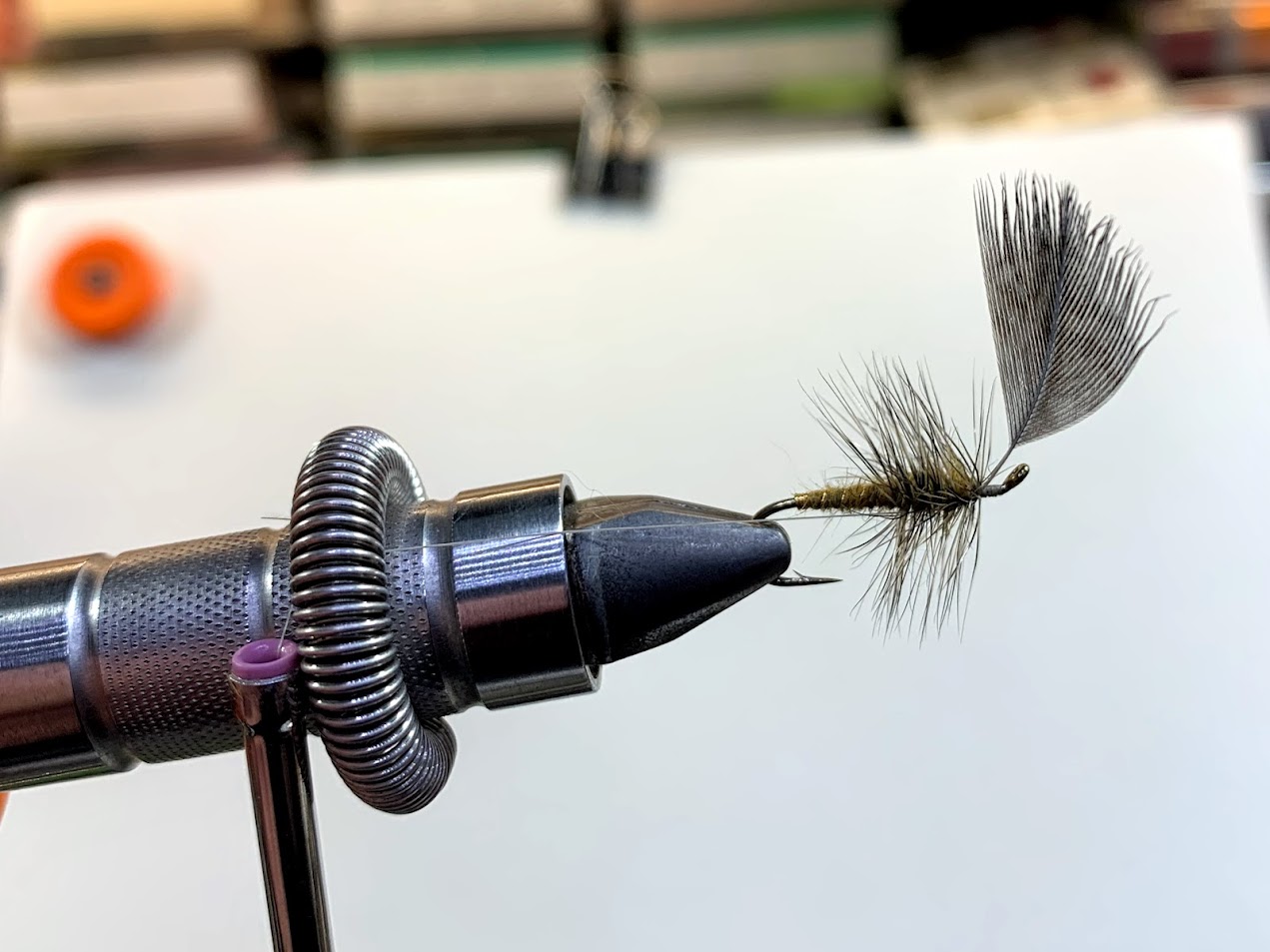 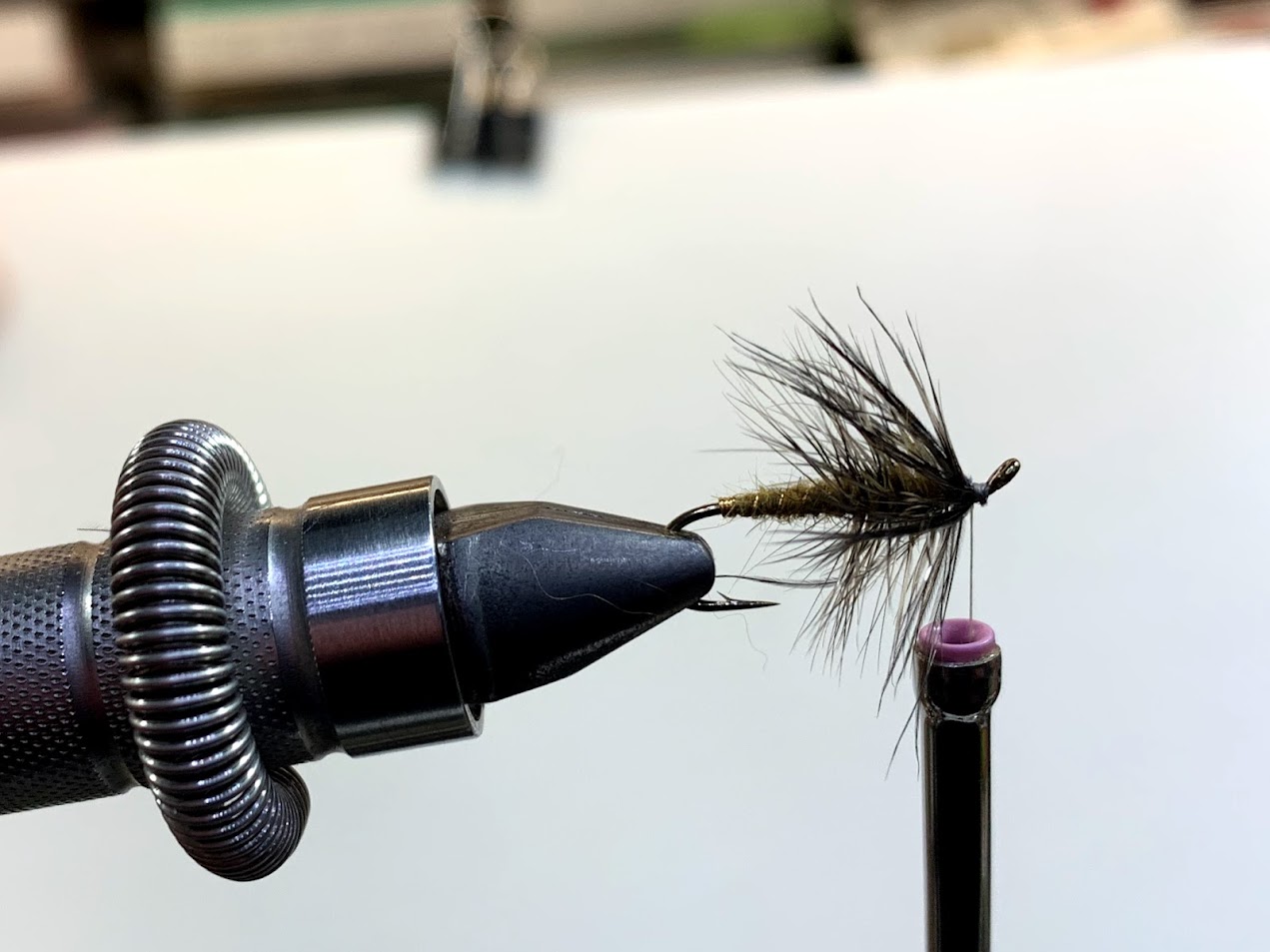 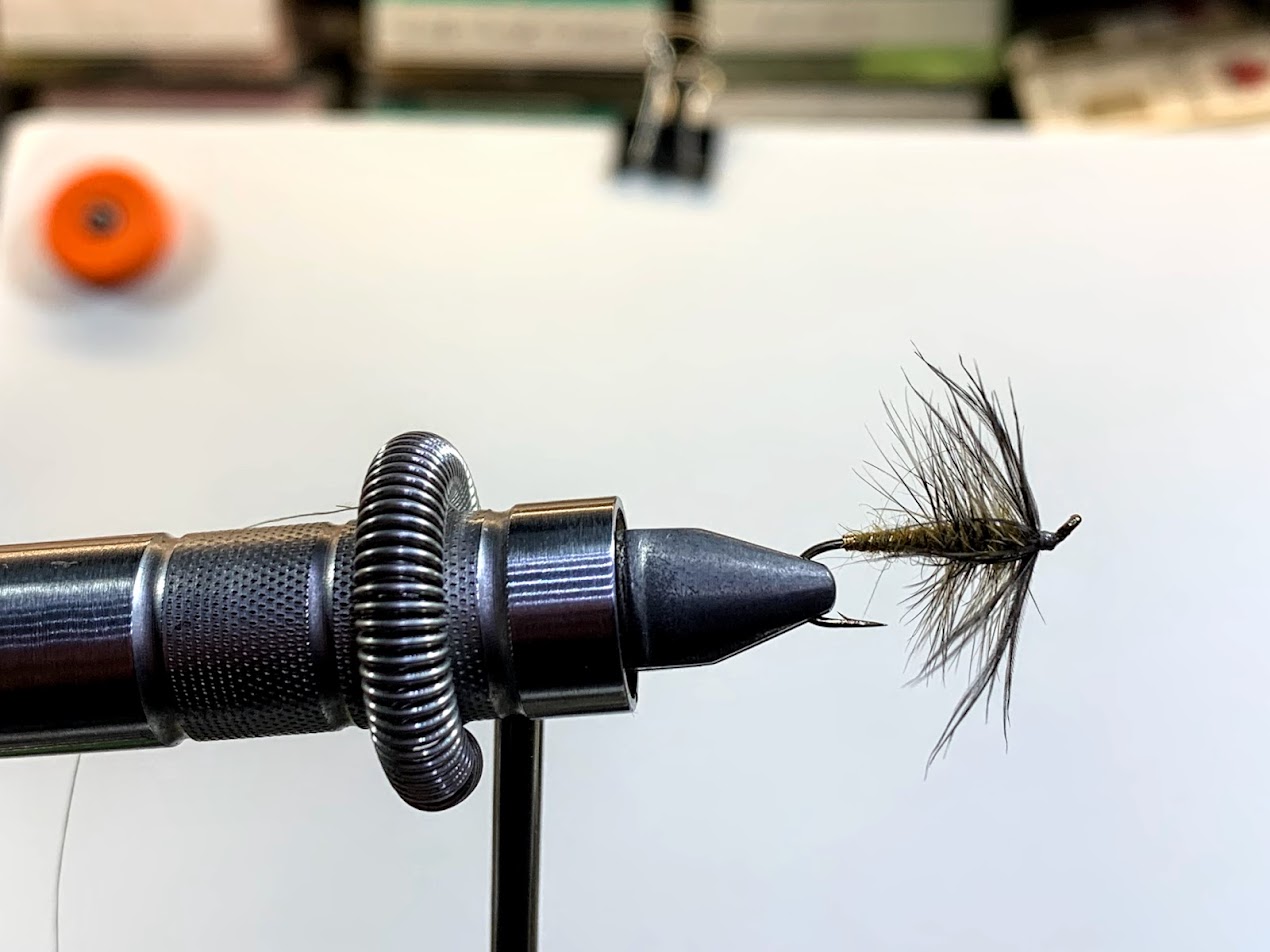 STEP ONE (1):
Mount the hook in vice, and attach your tying thread with five firm wraps. Trim off the tag end.
Tye in a prepared partridge hackle and the grizzly body hackle (both feathers should hang out over the eye of the hook).
Tye on a piece of fine copper wire, and wrap the thread back to the barb of the hook.

STEP TWO (2):
Dub the tying thread and then wrap forward towards the eye of the hook, forming a slender tapered body. Stop roughly ¼ of the shank length away from the eye of the hook. This will leave room for the wire rib to be tyed in and to form the thorax.
Wrap the copper wire back towards the bend of the hook, in three tightly touching turns. (This will help form a small wire tag, at the back end of the fly.) Then wrap the wire forward in four or five open spiral wraps. This will form the ribs the fly.

STEP THREE (3):
-Secure the wire with three firm thread wraps, then “helicopter” the wire until it breaks off cleanly under the thread wraps.

STEP FOUR (4):
-Dub the tying thread, and wrap backwards forming the thorax region of the fly. Stop just a little bit forward of the midpoint of the shank.

STEP FIVE (5):
-Wrap the grizzly hackle backwards over the thorax of the fly.
Capture the hackle with one wrap of tying thread, then continue wrapping the thread forward thru the hackle. Make sure you keep your thread wraps firm, and wiggle the thread slightly as your wrap forward. This helps minimize the number of hackle fibers that get trapped, when counter wrapping the thread.

STEP SEVEN (7):
- Grasp the tip of the hackle feather with hackle pliers, gently fold the fibers to one side, then wrap back towards the thorax of the fly. Two or three wraps of partridge will be plenty.
- Wrap the tying thread forward thru the partridge hackle, and secure with several tight thread wraps.
- Trim off the partridge hackle.

Nice job Ray ! That and your " peacock & herl" are favorites of mine.
Top

Excellent SBS, as always, Ray. Clear written instructions and excellent photography. I like it so much I stole the idea and used it on some trout spey sorta flies to help the soft, wispy hackle stand out from the body. I'll post a pic when I can.
"A man may smile and bid you hale yet curse you to the devil, but when a good dog wags his tail he is always on the level"
Top

A totally beautiful fly! What (or who) is the origin of the term "jingler"?
--Phil
Top

Phil - I do not know who coined the term "jingler". Perhaps someone else knows who started the name. I first encountered this style fly thru one of Datus Proper's books ("What the trout said" - outstanding book). I loved the style and incorporated it into my tying. The flies construction appears to be ideally suited for Tenkara fishing. Can't wait to give these a try this spring.

Ron - I look forward to seeing your creation. Always a treat to see!


Yesterday, I spent time tying up a batch of these flies for my spring box. I recently bought a few new hackle necks from Jim. These gave me a chance to play around with the new hackle (dark barred ginger "cree", grizzle dyed tan and a hard to describe unique variant) all worked nicely.

Here is a picture of the "Unique Varient" hen neck. If you look closely at the hackle in the sunlight, it has a light pink color to it. When I saw it, I just had to have it! (thanks Jim) 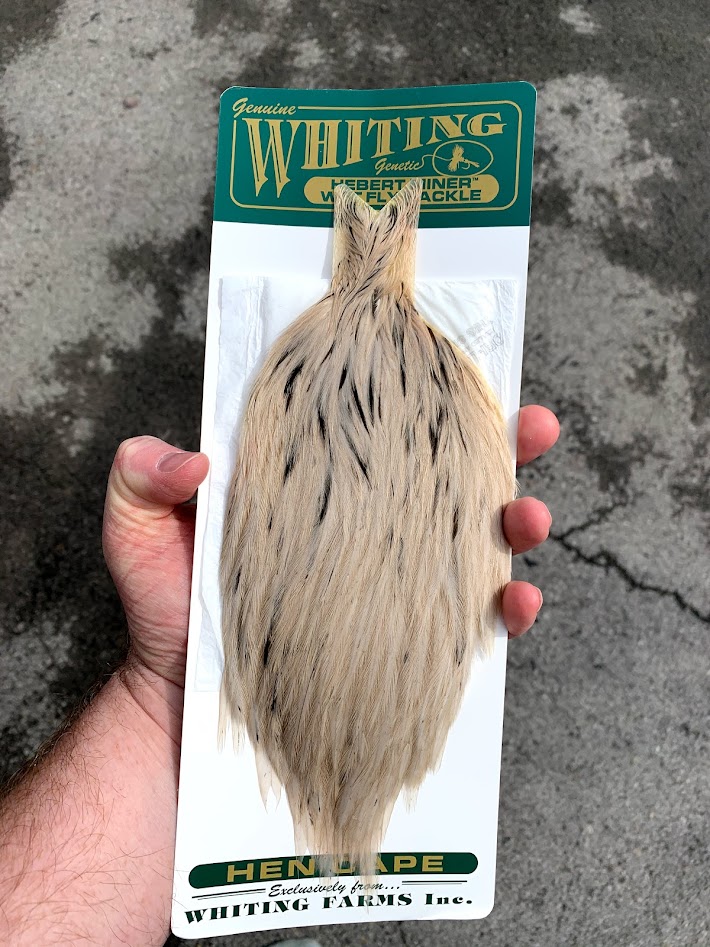 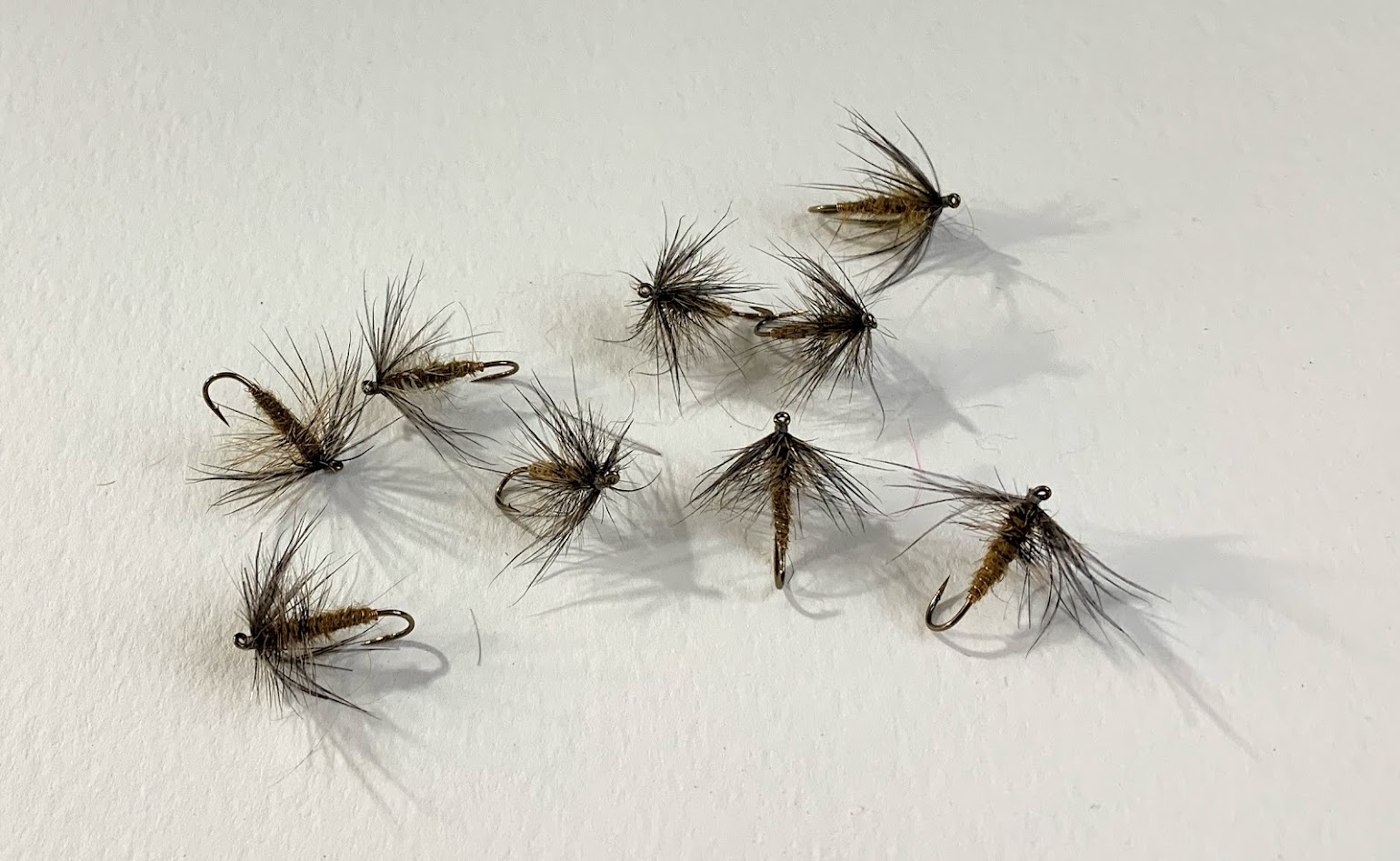 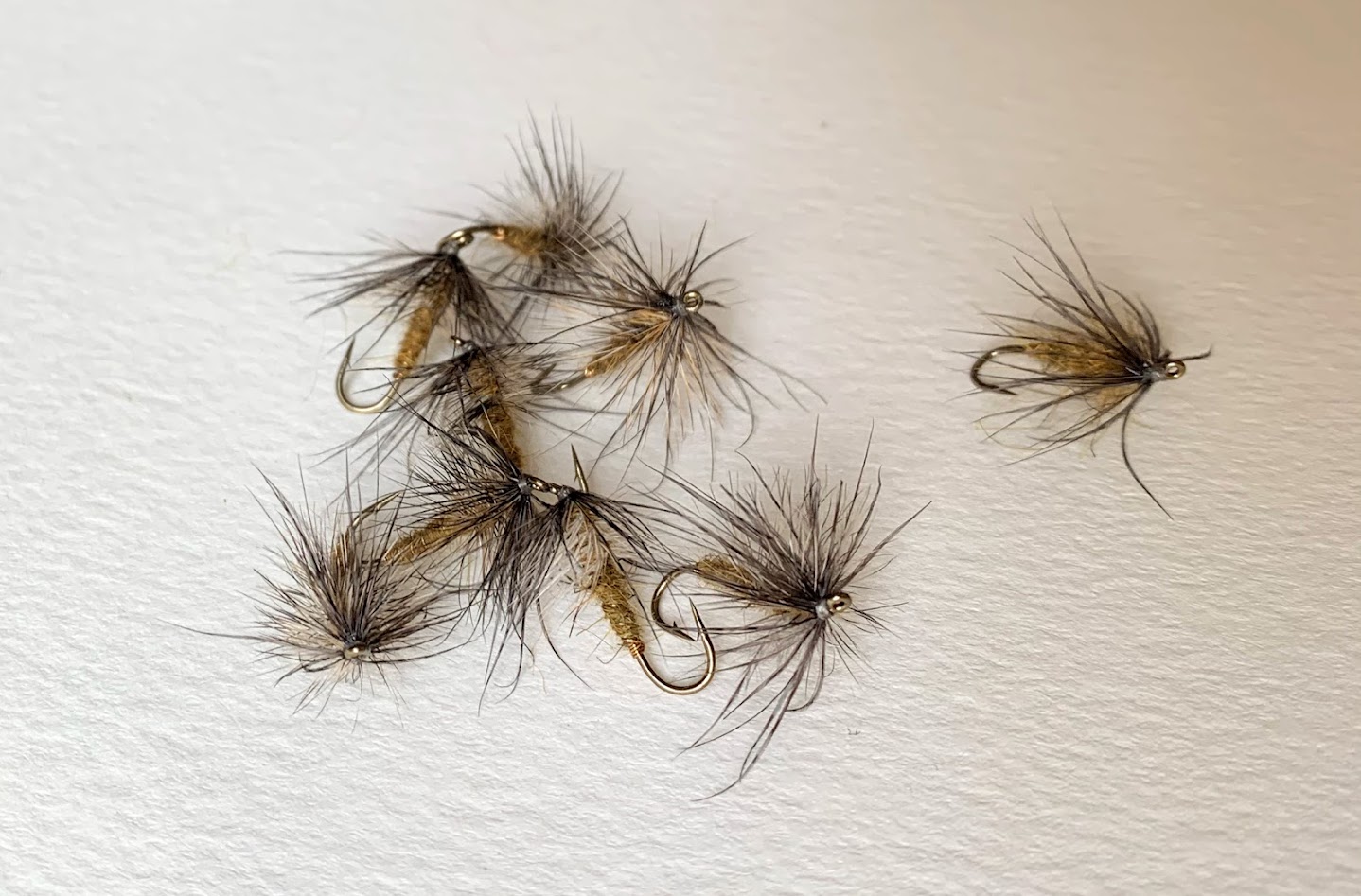 Here is a version tyed with a peacock herl body and brown thorax hackle. Such a pretty fly. 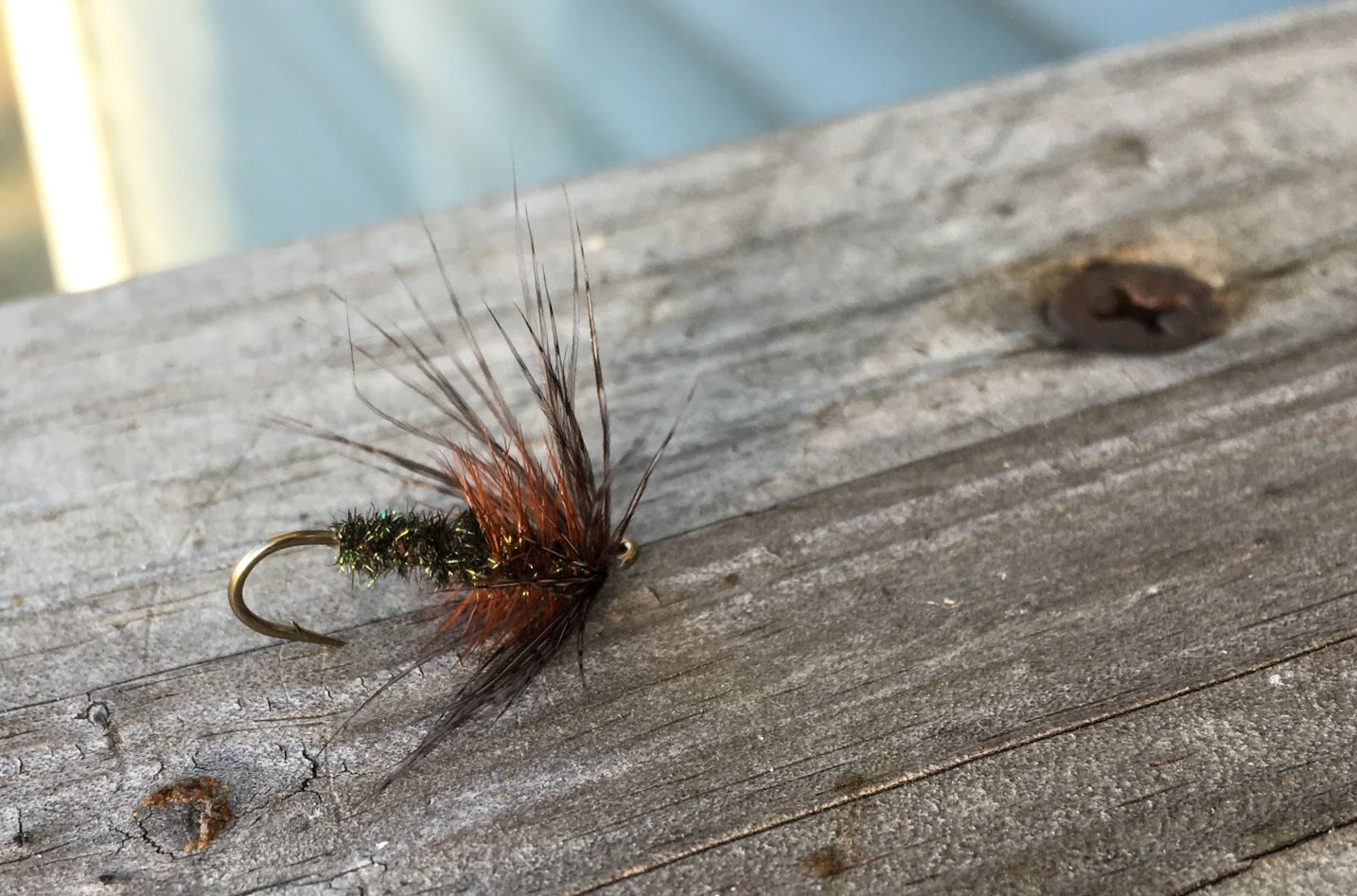 Ray,
Datus Proper's What the Trout Said is my all-time favorite fly tying book, even though it contains not a single fly pattern recipe.

I couldn't find the term 'jingler' in Proper's book, but was your fly inspired by his Bent-Hackle Fly? If so, he suggests that the stiffer rooster hackle behind the collar of soft hackle serves a structural role. Kind of like a bulging thorax of dubbing, perhaps. An interesting idea and very nicely tied by you.

Perhaps it's time for bearbutt to share again his photos of Datus Proper's traveling fly tying kit. Mr. Bearbutt brought the kit to a fly tying show in Madison (WI) that I attended a couple of years ago. Fondling Proper's tools and materials was akin to a bucket-list pilgrimage for me.

Did I mention that I think highly of Datus Proper's book? 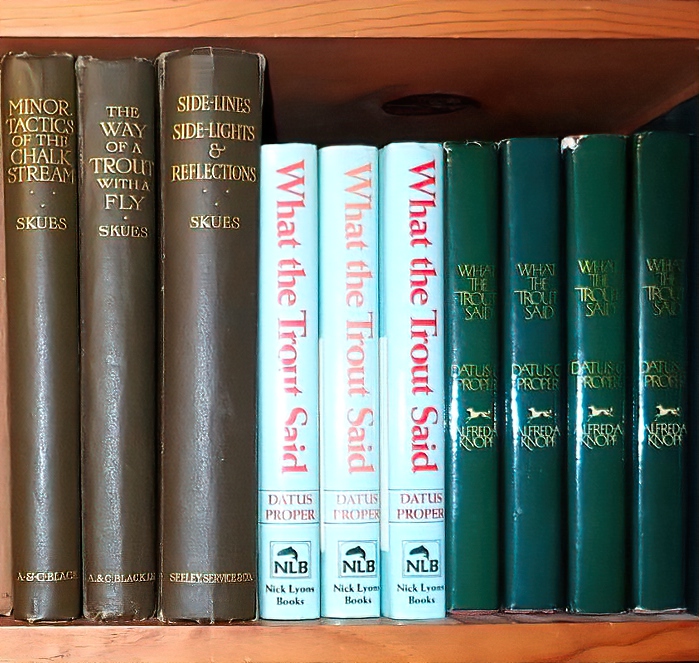 My copies of What The Trout Said, which I occasionally give away, live among distinguished neighbors on my bookshelf.

A little background for these "Jingler" flies;

Phil,
I am also a big fan of Datus Proper’s Books . IMHO his ideas and theory’s are very underrated to say the least! Proper’s other books on fly fishing and bird hunting are also first rate.

Lou
In sport,method is everything.The more the skill the method calls for,the higher it’s yield of emotional stir and satisfaction,the higher it’s place must be in a sportsman’s scale of values. RODERICK HAIG-BROWN
Top

Ray, here's a couple of flies I tied using this technique. Both are tied on size 6 TMC 200R. Top fly has a body of brown possom with a touch of UV Ice Dun added, ribbed with red wire. Furnace rooster for the thorax hackle and ring neck pheasant rump for the front hackle. The 2d fly has a green possum body with a touch of UV Ice Dub added, copper rib, furnace rooster hackle for the thorax and a Coot flank feather for the front hackle. 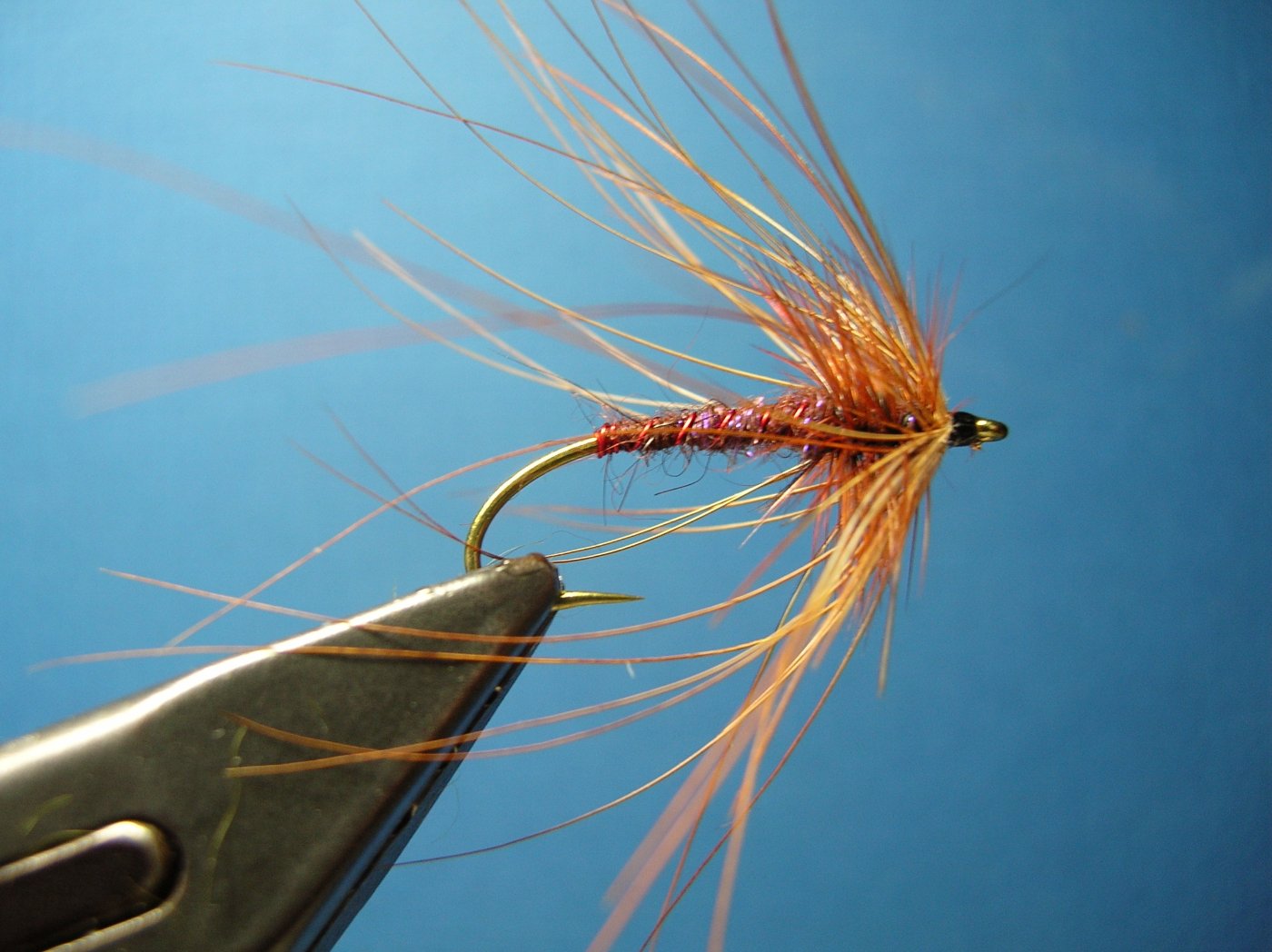 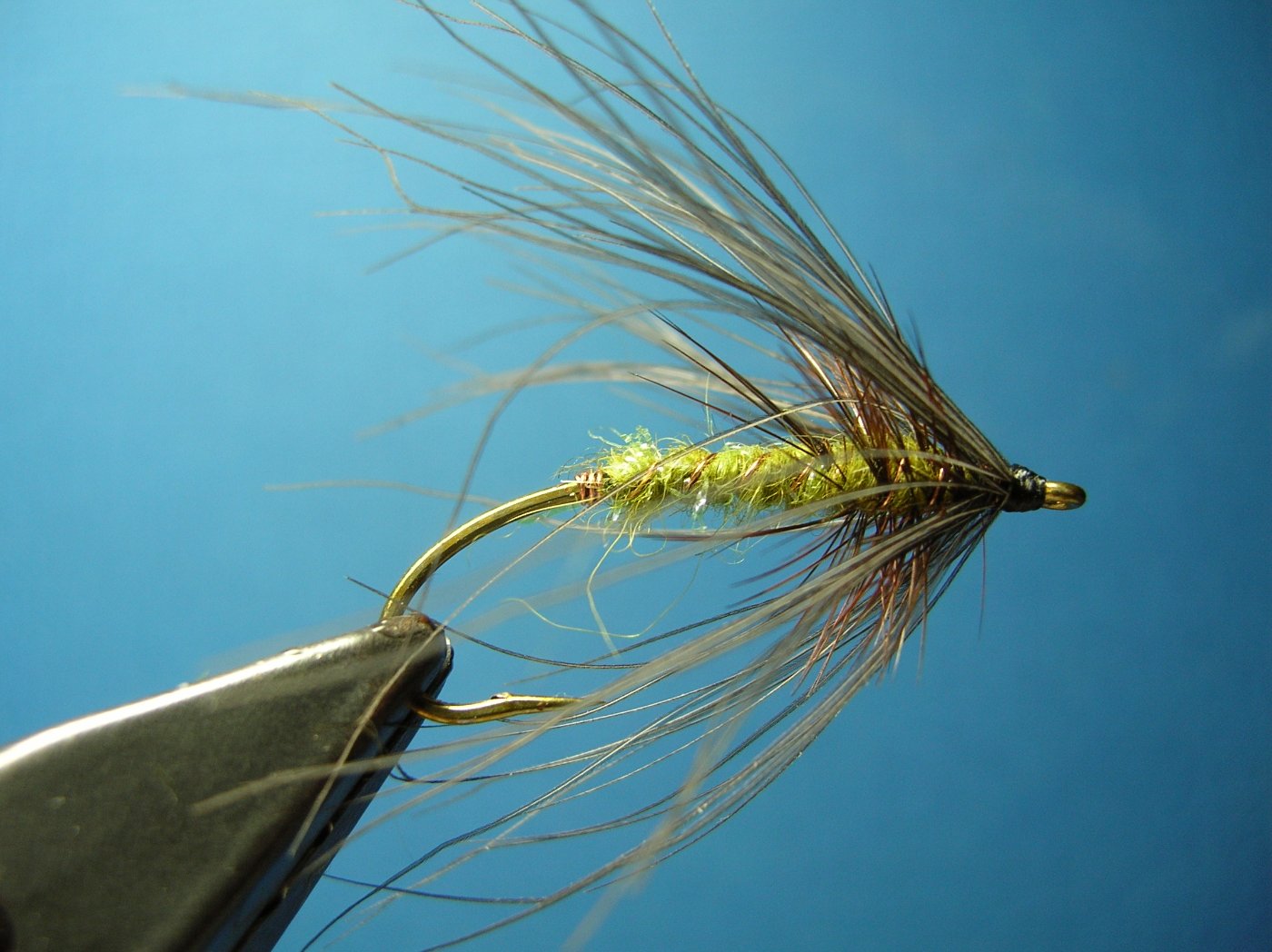 "A man may smile and bid you hale yet curse you to the devil, but when a good dog wags his tail he is always on the level"
Top
Post Reply
12 posts