Here is a new pattern for me courtesy of Gene Kaczmarek at the NW Expo on Saturday. I have fished Starling and Purple soft hackles but never a winged one.

My fly is crude compared to Gene's. I have never seen a Starling skin as prime as the one he was using and he is a master tyer. 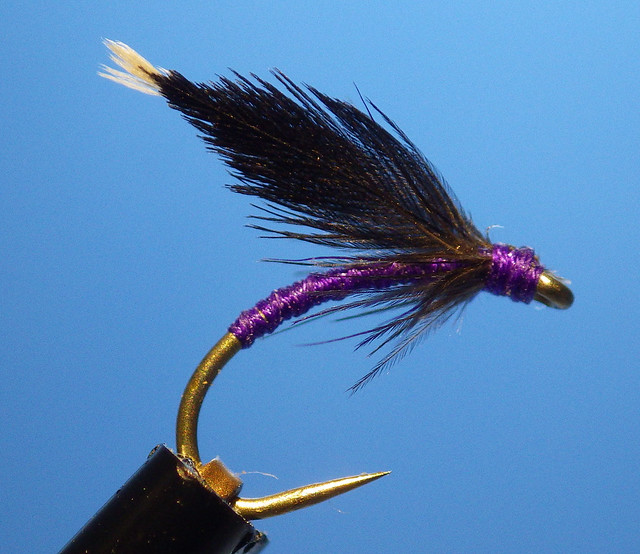 This tie is just a #16 scud hook tied with purple silk and 2 starling feathers. The wing uses the 2 feathers held back to back (concave with shiny side out) and tied in on top the silk after stroking some barbs back away from the tips to form a tie in point. After mounting the wing the two stems are then wrapped together around the hook to form the hackle.

My first attempt on a #14 was tied with 2 turns around the hook. I think there is too much hackle on this one but the fish might not mind. 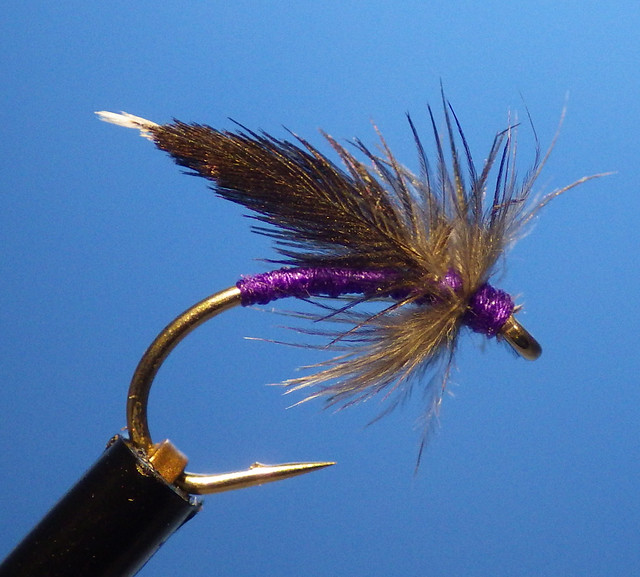 Simplicity with silk and two feathers. I will have to use this technique on some other soft hackles.

Thank you for that, Bill. That is certainly worth a try -- perhaps on Size #16 or #18.
Some of the same morons who throw their trash around in National parks also vote. That alone would explain the state of American politics. ~ John Gierach, "Still Life with Brook Trout"
Top

Bill - Davie McPhail tyes a pattern .very similar to this (maybe the same pattern). I need to find the link again. If I do, I will share the link.

letumgo wrote:Bill - Davie McPhail tyes a pattern .very similar to this (maybe the same pattern). I need to find the link again. If I do, I will share the link.

His "Davie's Spider" pattern uses the same wing/hackle technique, which can easily be applied to a body of purple silk thread ...

https://www.youtube.com/watch?v=uV7k3epJfJY
Some of the same morons who throw their trash around in National parks also vote. That alone would explain the state of American politics. ~ John Gierach, "Still Life with Brook Trout"
Top

This was actually one of the first spider patterns I tied a fished with consistently. Very productive for me on the Deschutes River. I tied it simpler though, but probably not as durable. I tied a single hackle in, over the eye and by the stem. Made a couple winds back and tied off leaving the tip on. Just like my flymphs by not trimming the hackle tip. Just having one tip never made a difference to the fish.
I hate it when I think I'm buying organic vegetables, and when I get home I discover they are just regular donuts.
http://www.oldhatflytying.com
Top

Thanks Bill. That is exactly the video I was remembering.

Thanks for the link Bill!I need to watch more of Davie's videos.

Carl what size were you using on the Deschutes?
Top

Bill, this is a sweet little pattern. I really like the second image with the webbier starling hackle. I used to tie erring on the skimpier side of hackles, but in the past couple years my hackles have really taken on a fuller dimension. No doubt either of these will fish very well.


w
"A man should not try to eliminate his complexes, but rather come into accord with them. They are ultimately what directs his conduct in the world." Sigmund Freud.
www.WilliamsFavorite.com
Top

From W. C. Stewart's book, “The Practical Angler or The Art of Trout-Fishing More Particularly Applied to Clear Water”:

"Dressing a spider is a much simpler operation than dressing a fly, and therefore it is better to begin with it. Having selected a thread of gut and a hook, the next thing is to choose a feather, which, to make a neat spider, must be so proportioned to the size of the hook that the legs of the spider, when dressed, will be about the length of the hook. Before commencing, bite the end of the gut between your teeth; this flattens and makes it broader in the point, which prevents it slipping, a thing very liable to occur with small flies. Next, take the hook firmly between the forefinger and thumb of your left hand, lay the gut along its shank, and with a well-waxed silk thread, commencing about the centre of the hook, whip it and the gut firmly together, till you come to the end of the shank, where form the head by a few turns of the thread. This done, take the feather, and laying it on with the root end towards the bend of the hook, wrap the silk three or four times round it, and then cut off the root end.

What remains to be done is the most critical part of the whole operation: still holding the hook between the forefinger and thumb of your left hand, take the thread, lay it along the centre of the inside of the feather, and with the forefinger and thumb of your right hand twirl them round together till the feather is rolled round the thread; and in this state wrap it round the hook, taking care that a sufficient number of the fibres stick out to represent the legs; to effect this it will sometimes be necessary to raise the fibres with a needle during the operation. Having carried the feather and thread down to where you commenced, wrap the silk three or four times round the end of the feather, and if there is any left cut it off, and finish with a succession of hitch-knots, or the common whip-fastening. If the legs of the spider when dressed are too long, there is no remedy for it; cutting injures rather than improves them. This is a very rough and simple mode of dressing a spider, and does not make it so neat as if the feather were put on by a pair of nippers, but it is more natural-looking, and much more durable, as the feather is fastened on by the thread the whole way down.”
Top
Post Reply
11 posts