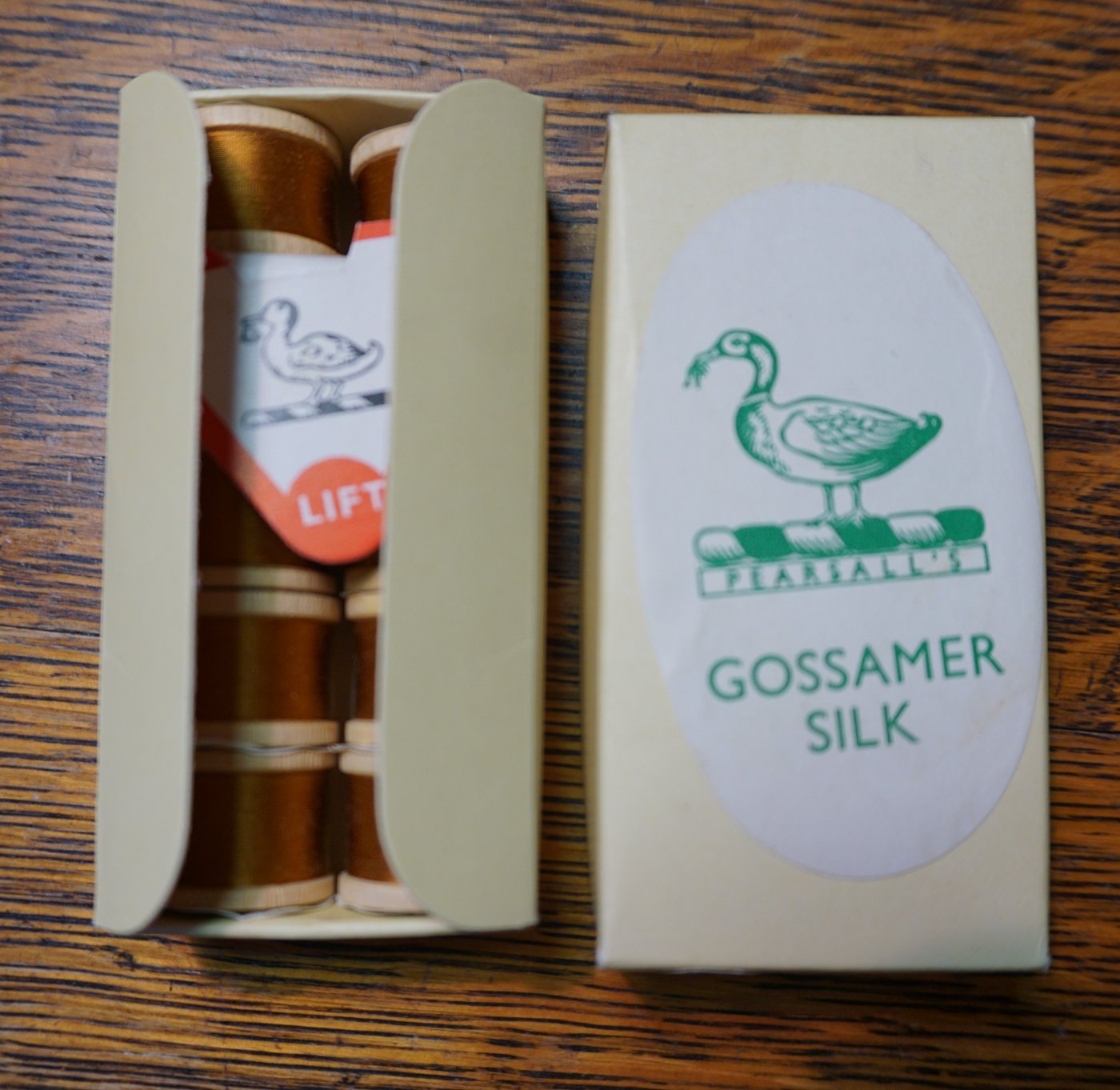 Yellow Pearsalls Box. Notice the lift tab to make it easier to remove the spools from the box. (Yes, it's a full box of 6b.......)
Top

There is a book called The Silk Industry by Frank Warner, which is an interesting read for anyone with an eye for the story of silk production in the UK. Although, the real insight comes when you search for Samuel Cunliffe-Lister within this publication. Cunliffe-Lister became a billionaire by taking the waste products of silk production, and reprocessing into pure new silk at a huge reduction in cost. Cunliffe-Lister is at the epicentre of events. The American Civil War, and the blockade of confederate ports means Britain can no-longer get cotton. The famous cotton mills of Lancashire are at a stand-still, and the British government is relaxing the tariffs on silk imports and production. At the very same time Cunliffe-Lister invents his silk machine and takes the world by storm, building the worlds largest silk mill in Bradford. He also buys lands in Indian to propagate his silk worms, silk embroidery mills in Germany and France, as well as Lace production facilities in France. He becomes so rich that in the 1880’s he buys four country estates in Yorkshire, for fifteen million pounds!
What has all this got to do with Pearsalls? Well, when Pearsalls were taken over in the mid-1800’s, the new owners operated a retail business not a manufacturing business. They imported their embroidery silks from Germany, as well as gut sutures from Murcia in Spain, simply rebranding them and selling on. The Lister company was the worlds largest silk manufacturer and a supplier to Pearsalls. Later, in the late sixties, when the Lister company ceases silk production, Pearsall’s silk shades subtly change. Is this this because they have changed supplier? I will leave you guys to ponder.

Greenwell wrote: ↑Tue Dec 04, 2018 10:51 pm
The packaging changed too, first small cardboard boxes of several different types, then plastic covered boxes. Plastic tubes were used for a while also in the 1990's.

This is a terrific thread--and it's about time I started sharing some stuff with everyone here.

John's right, the packaging changed--these green boxes were used for a while, though I dont have the years for them: 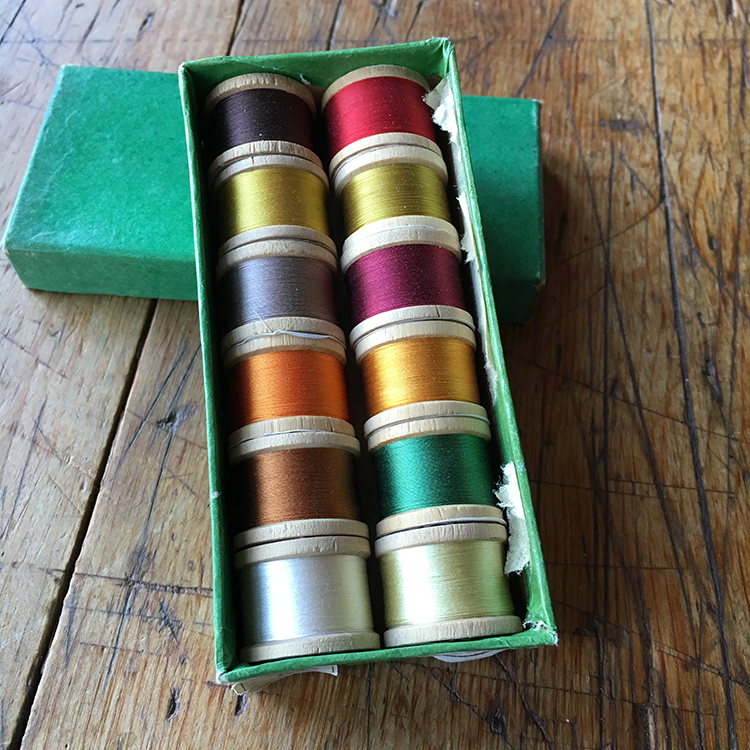 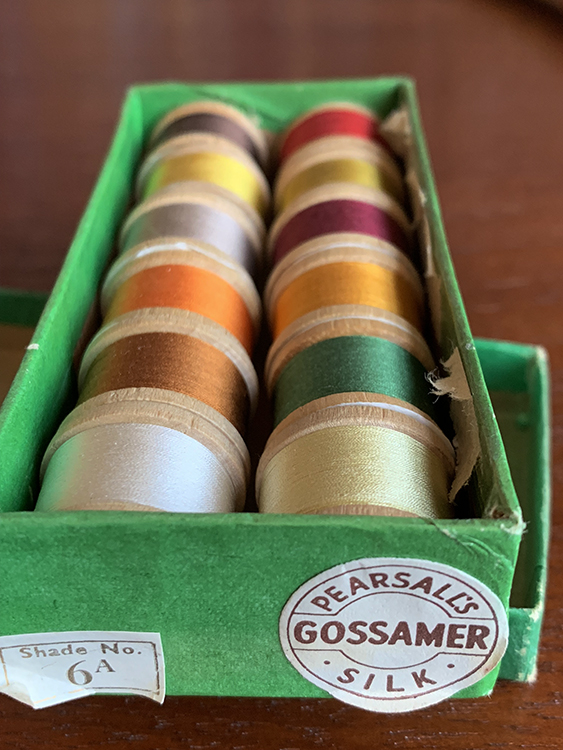 Happy to join you guys,
bb

Joe - welcome! Great to hear from you, and have you with us!
Dana
Soft and wet - the only way....
Top

I'm envious of all you folks who have done this so much longer than have I... I didn't even know Pearsalls' existed until after they stopped making it and therefore I'll not have collections of these beautiful silk threads....However,... close your ears you purists... but I'm taking White Pearsall's, which I can find, and coloring them nicely with permanent markers....I know, I'm doomed to purgatory... but one has to do what one has to do...
Top

ronr wrote: ↑Sun Jan 06, 2019 11:13 pm I'm envious of all you folks who have done this so much longer than have I... I didn't even know Pearsalls' existed until after they stopped making it and therefore I'll not have collections of these beautiful silk threads....However,... close your ears you purists... but I'm taking White Pearsall's, which I can find, and coloring them nicely with permanent markers....I know, I'm doomed to purgatory... but one has to do what one has to do...

I've got to hoard permanent markers now. Which ones are kosher?

(You are clever, ronr).
Top

ronr, remember the trout are the final judge and they are not looking what brand of silk you are using. I am not a hoarder of Pearsall's silk either. Besides, I am out of room. I acquired most of mine more recently from Sweden thanks to DD.

I really enjoy the history of the sport and Pearsall's is part of that history.

I'm another that enjoys the history behind the Pearsall's and enjoys tying with a bit of that history. I haven't stocked up over the years. It's not in my nature. Certainly the fish will not mind and I doubt they notice which shade of yellow a fly is. There are other silk options, no they are not Pearsall's, but should serve the purpose. In fact, that reminds me, I need to get my Art of the Tying the Wet Fly rebound, it's starting to come apart from all the use and it's the only one I have.
I hate it when I think I'm buying organic vegetables, and when I get home I discover they are just regular donuts.
http://www.oldhatflytying.com
Top

my earlier comments are certainly with tongue firmly in cheek....I do find I really like tying with the Pearsall's Gossamer and I greatly appreciate the history and those dedicated to preserving it.I do tie for the pleasure of the process but mostly for fooling the fish.
Top

I have a number of Pearsall’s silks and I’m having difficulty in deciding which colour is which. As someone already said I don’t think the trout really cares which yellow they get, it’s all just yellow to them.
I don’t know if it would work but all car paint suppliers have a colorimeter to accurately match colours, maybe this might be a solution to any amberguity ? The other thing I have noticed is that some of my wooden spools are varnished or waxed, does this signify a age perhaps of manufacturing? My Edmunds and Lee book dispute being one of the hand made copies in great condition with all the tissue interleaves intact doesn’t seem to match my colours at all!
Now when I tie I think I will just go with what I think is the closest color.

Barry
Love both fly fishing and fly tying, been doing it for a while
But not much good at either
Top

I have a spool of Pearsalls marked Maltese Gold, anyone know what it is? Looks like Gossamerto me.
Barry
Love both fly fishing and fly tying, been doing it for a while
But not much good at either
Top
Post Reply
60 posts