Are there any differences in the thread on the wooden spools when compared to the thread of the same color on the white plastic spools?

Ken,
Despite the Forum Ghillie's appellation, I am more of a Pearsall's student than a Pearsall's professor. I own both wooden and plastic spools of 3 or 4 Gossamer colors, and they are very close in color. Any differences are subtle and usually concern sheen of the thread rather than the color. I'll pull a few out and take some photos

I don't know the answers to your questions about the relationships of the several Clarets. My understanding is that plastic spools replaced wooden spools in the 1980s, but others here are more knowledgeable than me.

I'm quite puzzled by old No.15 (Maroon). My experience is that "maroon" is a reddish brown, but that wooden spool of old No.15 contains very little red to my eyes. Yet, the color does not match any of the other brown spools. In the Pearsall's Reference Card posted by Ray (download/file.php?id=2421), No.15 (Maroon) is quite brown. Did "maroon" have a different meaning many years ago?

I like your idea of printing a larger size of the color chart. The images have sufficient resolution to print the spools part of the color chart at 16" x 23" at 300dpi. Is 300dpi sufficient for a quality print? I know little about artsy printing. Still, some smaller size could be printed that is suitable for framing. Maybe a wingless wet tied with each color? This could get out of hand. After all, I need time to fish.

Phil, your maroon is, on my screen, much closer to brown than my maroon is. You could say that no 17, brown is a lot warmer brown than no 14, maroon. You don't see much of any red on the maroon spool but more of it when you tie.

Next step should be to keep both hook/thread and camera subsurface. That might give a different outcome.

Phil should put his work in a nice wooden frame with three flymph patterns and a spool of 6B at the bottom. Or, he can just send me a spool of 6B and I will make my own.

I thought Sherry Spinner (#6B) only existed in the minds of people who believe in unicorns. Now, I see it's actually a real color.

I look forward to the pictures comparing thread colors on the wooden spools versus the plastic spools. My high school colors were maroon and white. Our uniforms looked nothing like Pearsall's maroon! I think the posters could be popular. I don't have a poster of the Hardy Girl, but I could put up a poster of Pearsall's Gossamer without causing any conflict in the house!

Please not that colors on your screen might not be the same as mine. It’s all due to “color profiles” and unless the orginal had a calibrated system and yours has the same calibration then the colors will indeed different. Also the best photography can’t match the colors as seen by the human eye
B
Love both fly fishing and fly tying, been doing it for a while
But not much good at either
Top

Ken,
Other than the old and new No.15 shown in the color chart, these are the only other Gossamers for which I have both old wooden and new plastic spools. 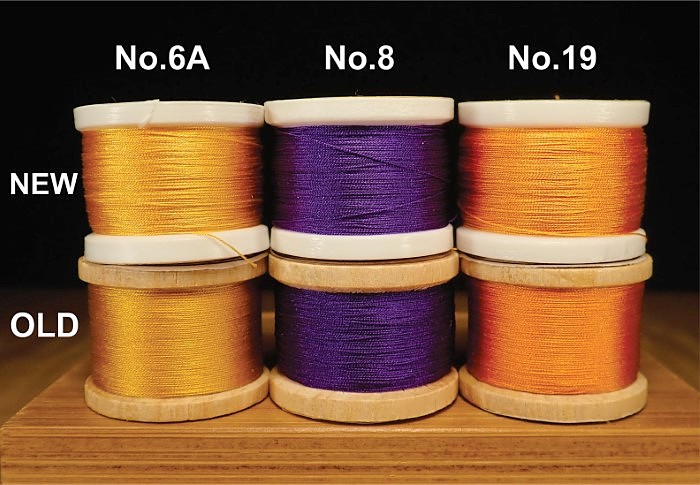 The older spool of hot orange might be a slightly deeper shade of orange, but any difference is subtle at best.

All 3 comparisons look very much the same to me. And, if i understand the timing correctly,
the thread on the wooden spools is at least 30 years old--pretty amazing!

Bazzer69 wrote: ↑
Tue Apr 02, 2019 8:59 pm
The dramatic color change is in unwaxed thread. Once silk is well waxed it seldom changes color when in water. It’s common in Salmon flies to use a white underbody so the over wrapped colors appear more brilliant when wet. It’s always a good idea to test a new pattern under water to see if it’s the color that you expected.
B

Bazzer,
I've long thought that waxing silk thread slows but does not eliminate the darkening when wet. I'm unsure when or how I learned that supposed principle, so I did a few tests of whether well waxed silk does or does not darken when wet. The results, shown in two photos below, are in between those two extremes. Waxed thread darkens, although not quite as much as unwaxed thread.

I wrapped two layers of unwaxed Gossamer No.6B (Sherry Spinner) on a hook. I then pulled a second length of thread six times through a block of light-colored medium-hard tyers' wax (formula 7-2-1) and wrapped it on the same hook. This is the dry photo: 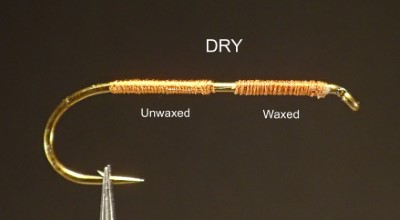 The silk darkened somewhat from waxing. The major effect though was removal of the silk thread's sheen. The unwaxed thread had a nicely reflective sheen (shiny surface), while the waxed thread had a "matte" finish of similar but slightly darker color.

I next tossed the hook in a tub of water. The unwaxed thread immediately darkened to its final color. The waxed thread darkened slowly to a final color that was considerably darker than when dry but a little lighter than the final color of unwaxed thread. This photo was taken after 6 or 7 minutes in the water: 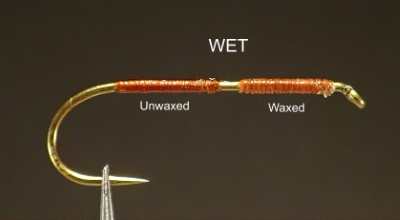 The conclusions? (1) Both waxed and unwaxed silks darken when wet, but waxed thread darkens a little less (at least, with my wax and Gossamer No.6B). (2) Gossamer No.6B is beautiful when wet!

I should say that, of all the things that make for successful trout fishing, color is way down on the list of things that I think are important. Presentation and size, for example, are much more important in my opinion. If, however, a tyer desires a specific final color, flies tied with silk need to be checked when wet.

daringduffer wrote: ↑
Wed Apr 03, 2019 1:23 pm
Next step should be to keep both hook/thread and camera subsurface. That might give a different outcome.
dd

dd,
Have you met the Forum Ghillie? He is a mischievous fellow also, and you would get along quite well together.

P.S. Your spool of No.4 (Light Yellow) was mailed homeward earlier this week, along with a medium dun hen cape. The post office estimated 1-2 weeks for delivery.
Top

Bravo Phil!
I hate it when I think I'm buying organic vegetables, and when I get home I discover they are just regular donuts.
http://www.oldhatflytying.com
Top

daringduffer wrote: ↑
Wed Apr 03, 2019 1:23 pm
Next step should be to keep both hook/thread and camera subsurface. That might give a different outcome.
dd

dd,
Have you met the Forum Ghillie? He is a mischievous fellow also, and you would get along quite well together.

P.S. Your spool of No.4 (Light Yellow) was mailed homeward earlier this week, along with a medium dun hen cape. The post office estimated 1-2 weeks for delivery.

. No, I am a lot more shy and polite and respectful and all that but I would like to meet you both. I'm somewhat busy this week but maybe next? I look forward to the medium dun silk.

I regard your work as important even if colour might not be of great importance to the fish. Even if Pearsall's is vanishing, silk will probably always be used. Now tiers aware of your charts will start to think, not only of colour of wet silk but all materials used. We will think, not only of colour but of other qualities as well; reflectance and what not. So, good work.