One of the books I "grew up" on was American Trout Fishing: by Theodore Gordon and a Company of Anglers . Originally published in a deluxe edition in 1965 as The Gordon Garland to commemorate the 50th anniversary of Gordon's death, the trade edition followed in 1966. Edited by my good friend, Ted Rowgowski, it contains essays by many of the finest anglers and angling writers of the day, including Wulff, McClane, Marinaro, Schwiebert, etc it's well worth finding and usually sells for very little on the used market. The piece by R. Palmer Baker, Jr, Fishing in Arcady is worth the price of the book alone and describes fishing in the rivers and streams I have fished my whole life in Upstate NY.
Here are scans of the pages about Leisenring in Ted Rowgowski's piece Crackerbarrel Discourses and the drawings by Charles DeFeo of the Leisenring flies. 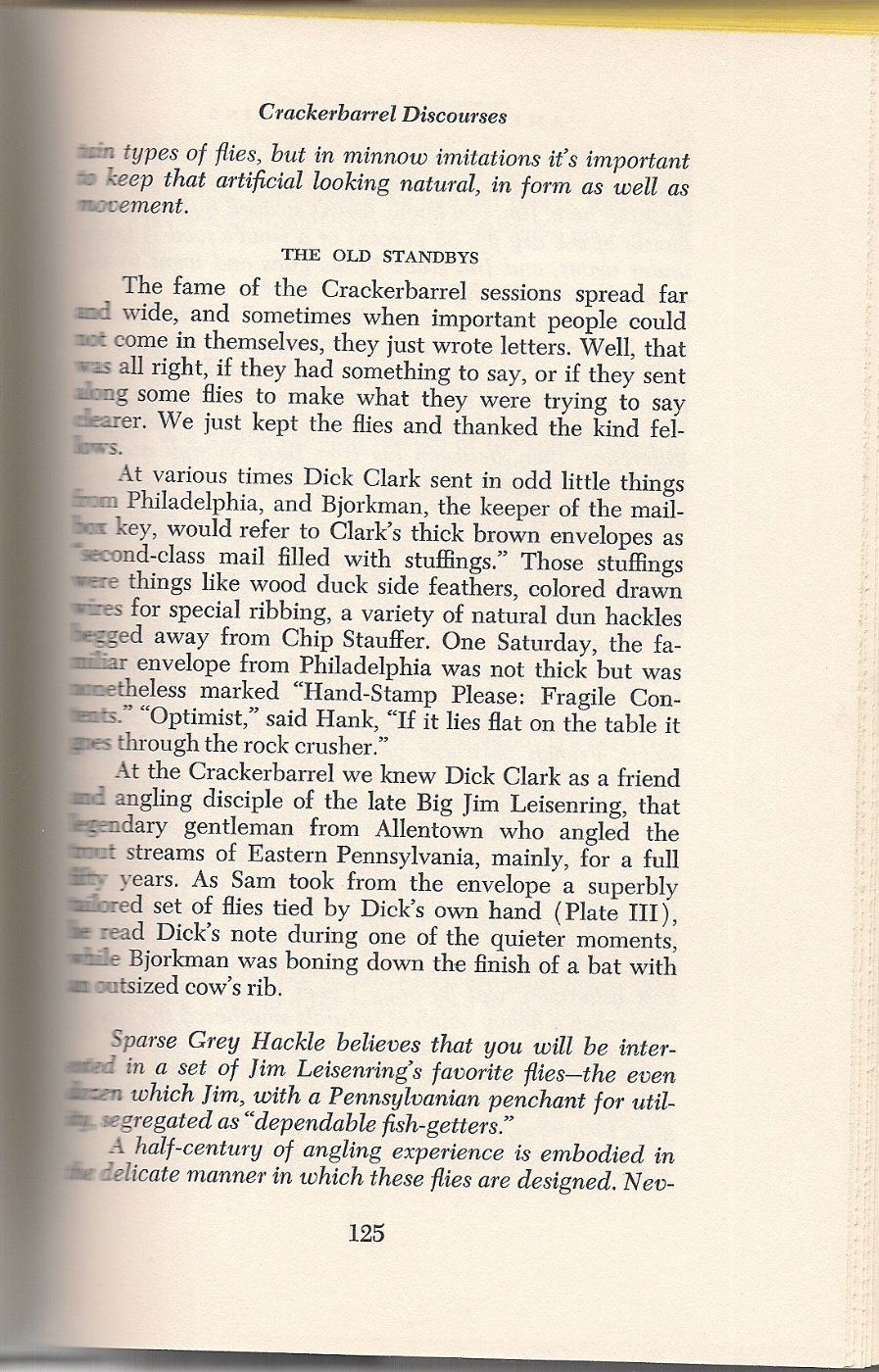 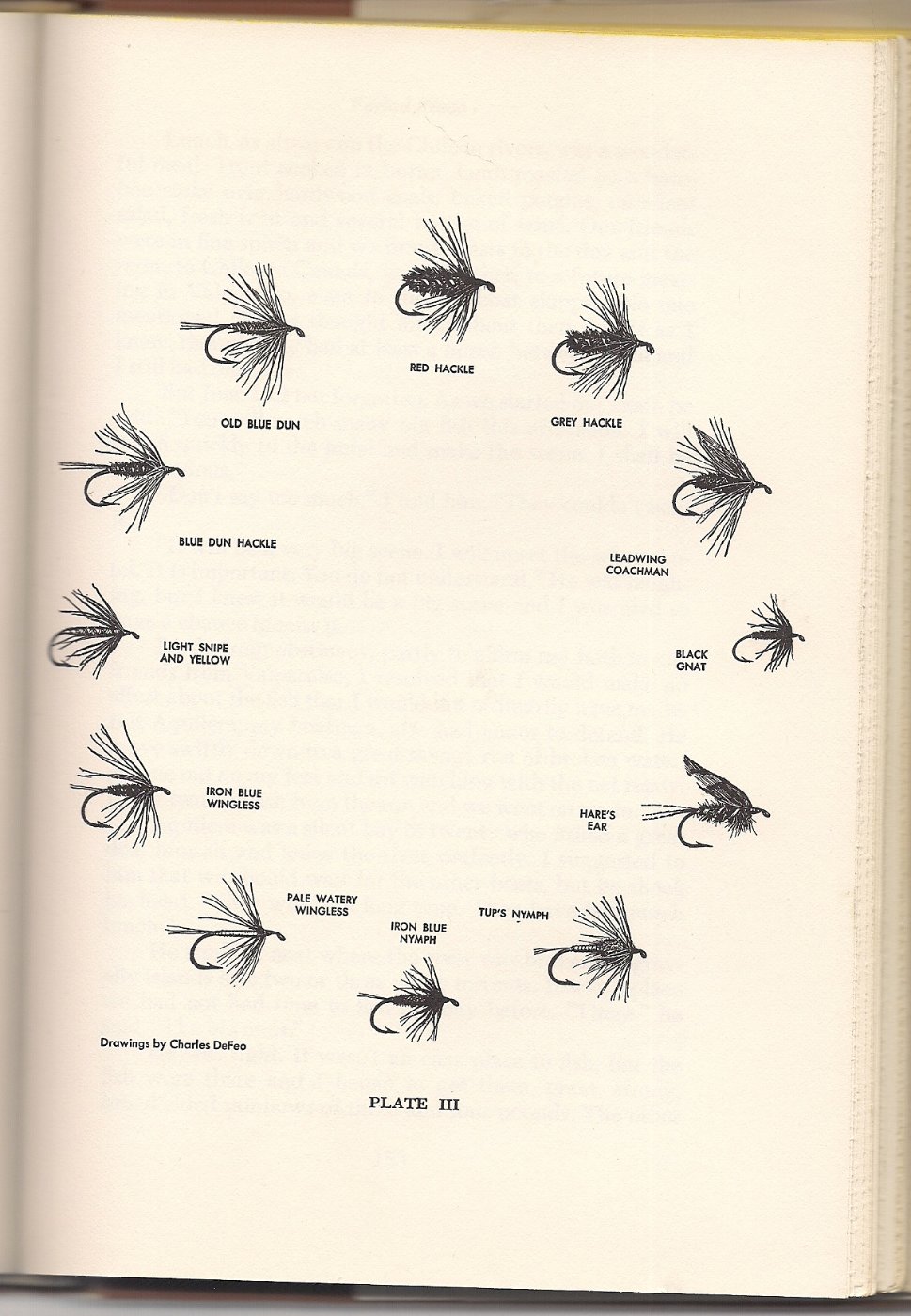 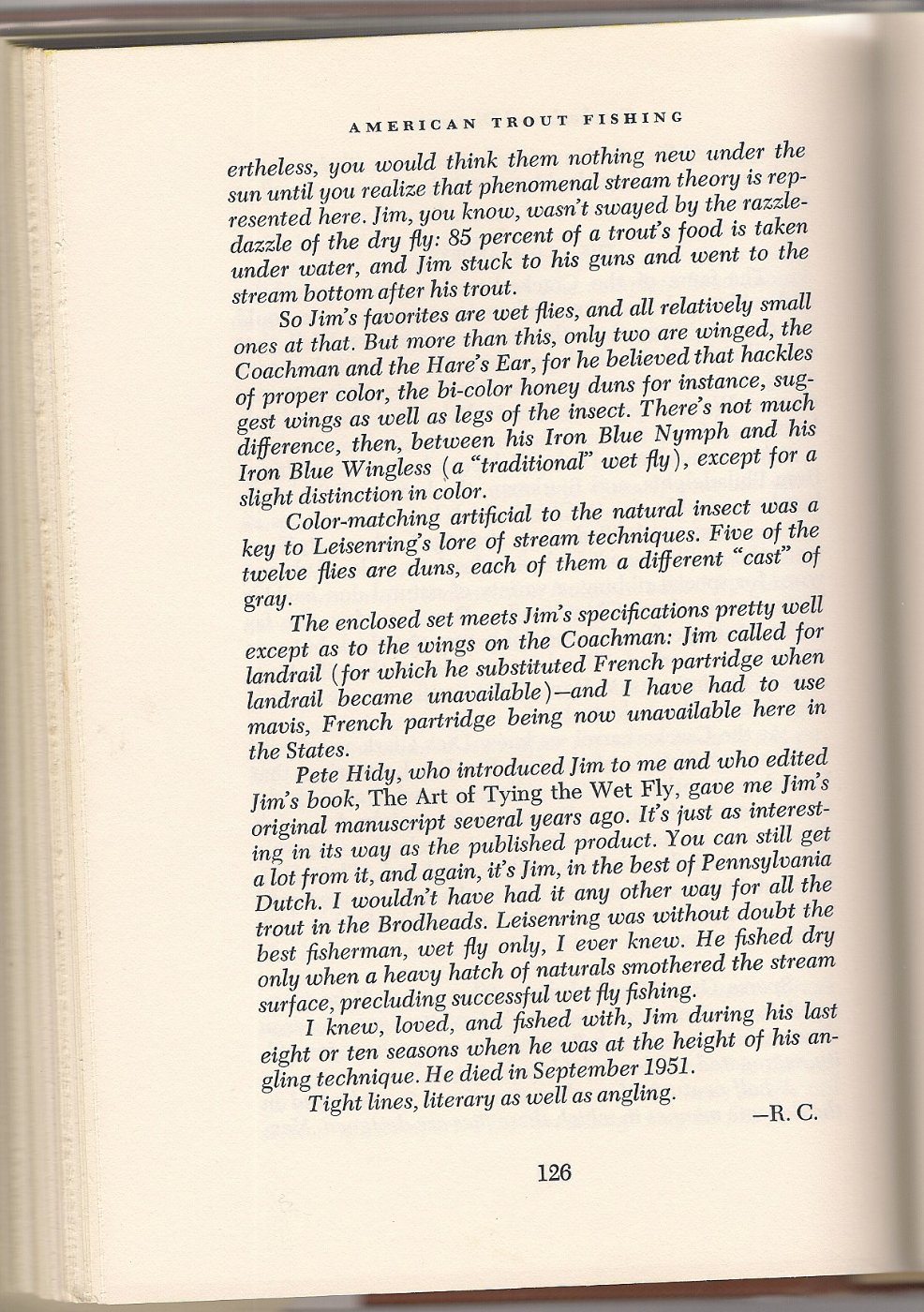 In an earlier post I suggested chukar tail as a landrail substitute. I included a photo comparing a chukar tail with a landrail wing. Now I see that Leisenring resorted to using French partridge which is very similar to chukar.
Top

Thank you, John -- a tasty piece indeed. Some folks are not aware of the close connection between JL and Dick Clark even though they use the "Clark" spinning block to create the fly bodies that JL made on his pants leg. Our fellow member Lance Hidy has made good strides in documenting and establishing this relationship.
Some of the same morons who throw their trash around in National parks also vote. That alone would explain the state of American politics. ~ John Gierach, "Still Life with Brook Trout"
Top

Yet another of my favorites, I’ve read and reread this tome on many occasions......
Soft and wet - the only way....
Top

Thanks for posting this John. Yet another book to add to my library!
Top

wsbailey wrote: ↑
Sun Feb 17, 2019 1:43 pm
In an earlier post I suggested chukar tail as a landrail substitute. I included a photo comparing a chukar tail with a landrail wing. Now I see that Leisenring resorted to using French partridge which is very similar to chukar.

I’ve got a Veniards Landrail substitute which is dyed starling wing. It’s a colour I’ve never seen before kind of a reddish brown.
Barry
Love both fly fishing and fly tying, been doing it for a while
But not much good at either
Top

I love that book. Like Dana I've read my copy soooo many times.
Top

I picked mine up at a yard sale for .25 cents. Same yard sale yielded a Remington model 11 in 12g for $40.00 (I didn't ask why, I grabbed it and ran off thinking I just scored the deal of the century) After careful consideration the book was the far better purchase.

Years later, long after I'd given up on the thing, I gave it to my cousin who took it to a gunsmith. "You damn fools, the barrels bent!"

You know, you'd think a couple of people who shoot as much as we do would have noticed that. He put a new barrel on it ...and we still don't like it.
Top
Post Reply
10 posts • Page 1 of 1