"Following a letter of mine describing our traditional British wet-fly fishing techniques (FFM 1976), I received many inquiries about the techniques I use and how they differ from those portrayed by Sylvester Nemes in his book, The Soft-hackled Fly.

The traditional tackle, as I pointed out in my letter, includes a long rod, about 10 1/2 feet, a light line (I prefer a 3- or 4-weight double taper) and a leader of about the same length as the rod. To the leader are fixed three soft-hackled flies. Inquiries have prompted me to pass on some information about leaders for handling three flies, which constitutes the major departure from current American techniques..

There are drawbacks to the traditional leader with three flies - among them a nasty inclination of the droppers to twist around the leader, the increasing difficulty in changing flies as the droppers becomes shorter, and the tendency to stimulate the use of unsportsmanlike language as the whole lot becomes irretrivably snarled up following a mis-timed cast. These drawbacks can all be overcome by using a dropperless leader, whereby a fly, tied on an up-eyed hook, is threaded directly onto the leader and prevented from slipping down by the knot joining the tippet sections.

How one tapers a leader is a matter of personal preference based on past experience but, when using three flies, I prefer a very slight taper in order to keep the thickness of nylon to a minimum. My method of preparing a typical leader is, starting at the tippet, as follows: Attach the pointfly in the ordinary way to a three-foot lenth of, for example, two-pound test nylon. Tie a similar length of slightly stronger nylon (i.e., 2 1/2-pound test) to the free end by means of a reliable knot, such as a four-turn blood knot, and pass the other end along the back of a second fly and through the eye until the knot stops it. Fasten on a 1 1/2-foot length of three-pound test and slide a third fly along it. The leader can then be completed with five- and seven-pound test nylon in 1 1/2-foot sections to give overall length oc 10 1/2 foeet. This taper is sufficient for the slower speed and wider loop of the casting action required by the three-fly leader.

Not only does this system correct the drawbacks of the traditional leader mentioned above, but in addition it leaves less nylon about for the fish to see, the fly cannot wrap around the leader, and there is less tendency for the flies to catch on each other.

When I first tried this method some years ago, I suspected that there might be more missed takes due to the fish touching the nyslon before the fly. In practice this is not a problem, and one seems also to tempt more fish. It's certainly worth your while to give the method a trial."

Just wanted to share this but to me it was a herculian effort to type it all...

dd, thanks for taking the time to post this. It's an interesting idea and I've enjoyed seeing all the different ways people have tied in/on droppers. This would be fun to fool around with some time. I wonder if the technique might be improved using the fluorocarbon leaders rather than nylon? I've switched to a these fluorocarbon leaders for the past couple of outings and who knows if they made a difference. I was hoping in the bright sun on the very exposed spring creek water that I would have a better chance. Turns out a windblown leader and fly line could be made of pixie dust and still have issues.

Has anyone given this method a go? I know we've had conversations about methods for droppers and knots, etc. This one sounds interesting. For me, I have little interest in how it was done traditionally, or even twenty years ago. We have new materials and a broader range of experiences. Soft-hackles, spiders, and flymphs are only as relevent as they produce on the stream, and methods are the same for me as well. Not do discount traditional methods when they are the most effective today, rather than...they still work. If there is a method for using multiple flies that works best, I'd like to hear about it. (yes, different conditions warrant differnt methods...to each their own, your mileage my vary.

I build a leader that's in George Daniel's Dynamic Nymphing book. It's simple and easy to construct, turns over very well and easy to see. 20lb blue Stren -> 10lb gold Stren -> 6lb hi-vis.. I like the neon green Stren makes. From the tag end of the 6lb I use a tippet ring to connect to the tippet. Usually I'll make the leader 10-14 maybe 15 foot.. depending on what type of water I'm going to be fishing. Yea yea I know the leader is a rainbow of colors and some people probably think the fish scatter at the sight of hi-vis. I think that's a load of bull, I've had no such experience with hi-vis leader sections, even when dry flying it.

Now, droppers. Mostly I only use two flies unless the hatch is thick then I'll switch to three softies or flymphs to swing because I always have great success with this method. For the droppers i just take a piece of 8 inch tippet and lay it on the standing tippet that already apart of the leader and make two overhand knots, moisten and give her a tug. Now I've only really used nylon for tippet material so I can't really comment on floro. I hear it's great as all, especially for wet fly fishing but, 15 bucks for 30yards of tippets is a little outrageous in my mind so I'll stick with nylon and tough it out through the tangles

Stefan - Thank you for taking the time to share this with us. I need to read the passages a few times to be sure I understand the leader design properly. I burst into laughter when I read the comment "the tendency to stimulate the use of unsportsmanlike language as the whole lot becomes irretrivably snarled up following a mis-timed cast". I can attest from personal experience that this is an accurate statement. If the leader design you describe, can improve my luck with tandem rigged flies, I count myself in your debt. Thank you, my friend.

letumgo wrote:Stefan - Thank you for taking the time to share this with us. I need to read the passages a few times to be sure I understand the leader design properly. I burst into laughter when I read the comment "the tendency to stimulate the use of unsportsmanlike language as the whole lot becomes irretrivably snarled up following a mis-timed cast". I can attest from personal experience that this is an accurate statement. If the leader design you describe, can improve my luck with tandem rigged flies, I count myself in your debt. Thank you, my friend.

You're welcome Ray. Once in a while I go through old magazines to check out what is different from the last time I read it. Remember when I read Dave Hughes article about the "subsurface swing". That one I understood at once. My first copy of "Fly Fisherman" is from 1981. That was the year I started to read about fishing with the fly. Those magazines were expensive and hard to come by where I live. A few years later I found a copy of the 1941 edition of "The Art Of Tying The Wet Fly" for about twice the cost of the magazine...

Stefan - I came back and reread your post again. Based on the description in the text, I worked up the following diagram to help me understand the leader design. I figured I would share it here, in case anyone else would find it helpful. If you click on the image, you can see it in a larger size. 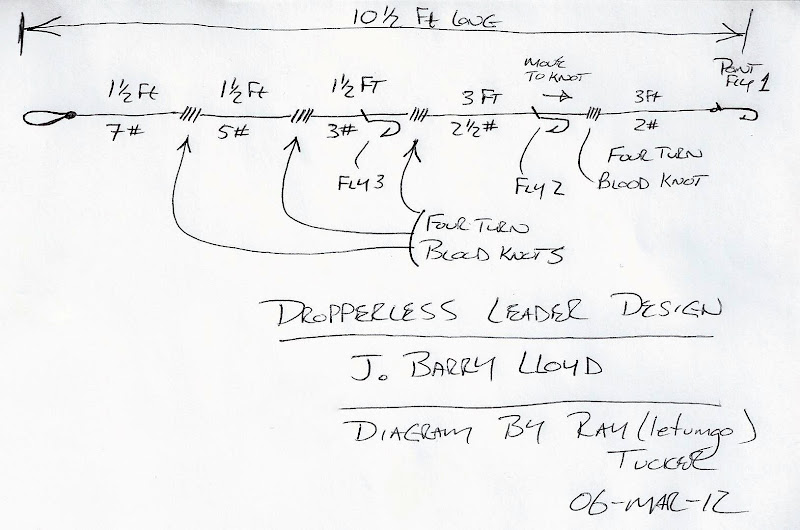 Obviously, I am no artist...

Thanks again, for sharing this. I need to check my local fishing regulations again. If multiple fly rigs are allowed, I plan on giving this a try this spring.
Ray (letumgo)----<°))))))><
http://www.flytyingforum.com/index.php? ... er=letumgo

I have used something like this. The nylon constructs that are used for attaching labels to clothing can be modified to work well;

I will post the source as soon as I find it again!

here is a close up photo of one and some I have collected:

I have been using microrings for about two seasons, not exclusively , but usually start a session with them in place.

On the plus side, they are reliable, easy to tie on / take off droppers - keep the dropper short , about 3" and tangles will be minimal. I always ensure that the droppers are a step down in breaking strain from the main tippet section thus ensuring that any arguments with trees or underwater snags mean that there is a good chance that only the fly is lost and not the entire tippet section.

On the down side, the rings are in a fixed position though its not a major job to change the section between say two rings.
On occasion I have used three rings which allows me to easily change the dynamics of the rig - particularily if I am using a dry as well as wets & nymphs. Microrings are not the ultimate solution but are a reasonable option.

From a practial fishing point of view I don't think I would be into having a leader with a load of knots, nor would I like to have to cut the leader and reassemble every time i wanted to change a fly. On a windy day, standing in the middle of the river with the wind whipping at the leader and tippet any major surgery is likley to lead to a complete messed up leader - and that will lead to much profanity.

Methods such as described at the start of this post are probably okay if you are inclined to fish a singular method but if you prefer versatility regularily switching between dry, nymphs and wets as conditions and water dicate then I suggest that theey may be a little cumbersome. If I was to try anything it would be Philips ( Flyfishwithme) method of using dropperes with perfection loops snuggled up to a knot.

just my tuppence worth

Ray - your sketch seems to be be spot on. What would be interesting to know is if the dropper flies are able to swing freely on the leader or if they get locked by the knots.

Otter - I suppose you have to set up a few complete casts of flies and change the whole leader, flies included, as in ancient times not so long ago. Otherwise I agree with you. (I know a good few who find it cumbersome to put on a new tippet when it's shortened by changing flies. They find it easier to keep on fishing and cursing the empty water).

Mike - I have seen that Hends product but not used it. Don't know anybody who has. Started using tippet rings a couple of seasons ago. They are slick and I bought those "black nickel" ones that Lucian Vasies sells. Seem reliable. Now if I could catch some fish too.

For me, I have little interest in how it was done traditionally

You are not supposed to swear in church!!

I have used leader rings for a long time now. I occasionally try other things just to see if they work better. Up to now, nothing has.