Well, been reading this thread and finally decided to grab my copy of "The Art of
Tying The Wet Fly & Fishing The Flymph" The 1971 version Third Printing Jan. 1973.
It all starts on pg. 121 with the selection of the proper fly for the water and conditions
etc., chapter 12, 'Fishing a Wet Fly'. On pg. 123 he mentions the casting upstream and
above the targeted fish, the fly sinking to the bottom and a very good description of
what we nowadays refer to as nymphing,

"I follow it with my rod, allowing no slack in the line but being very careful not to pull
against it and cause it to move unnaturally. The fly comes straight down to him bumpety-bump
over the gravel and stones along the bottom with the current."

He goes on from there with a description of the Lift method complete with handing the rod to
Pete to play the fish.
On pg. 124, the final para. reads as follows,

"Most of my trout are caught by the technique explained above if the nature of the stream
permits. I often adopt other tactics, but to explain them is not the purpose of this book."

the last quote was at the final paragraph of the original as Part II starts on the following pg.

So, each of the 3 flies would have a stream or section there-of just right for them to do
Mr. Bill's "terrorist" work ...


"FLYMPH - A WINGLESS ARTIFICIAL fly with a soft, translucent body of fur or wool which blends with the undercolor of the tying silk when wet, utilizing soft hackle fibers easily activated by the currents to give the effect of an insect alive in the water, and strategically cast diagonally upstream or across for the trout to take just below or within a few inches of the surface film".

Note the last words in that sentence.

I still don't have this book, only the 1941 first issue. I took the quote from Lance in The American Flyfisher.

Another quote from the article, about the reasons for Pete to add '...& fishing the flymph' to the 1971 issue:

"3. To offer a more versatile - and traditional - method of presenting the flymph than the Leisenring Lift, which is of relatively limited use......"

The explanation goes on, but I don't.

The Leisenring Lift is supposed to be most effective in streams with a depth of two to three feet, preferably where you can spot the trout.

This is what I have come up with so far.

The discussion in this topic reminds me of a few pages of the Book Wet Flies of Dave Hughes were he told us about a meeting with Pete Hidy.

I made a scan of several pages and hope it is allowed: 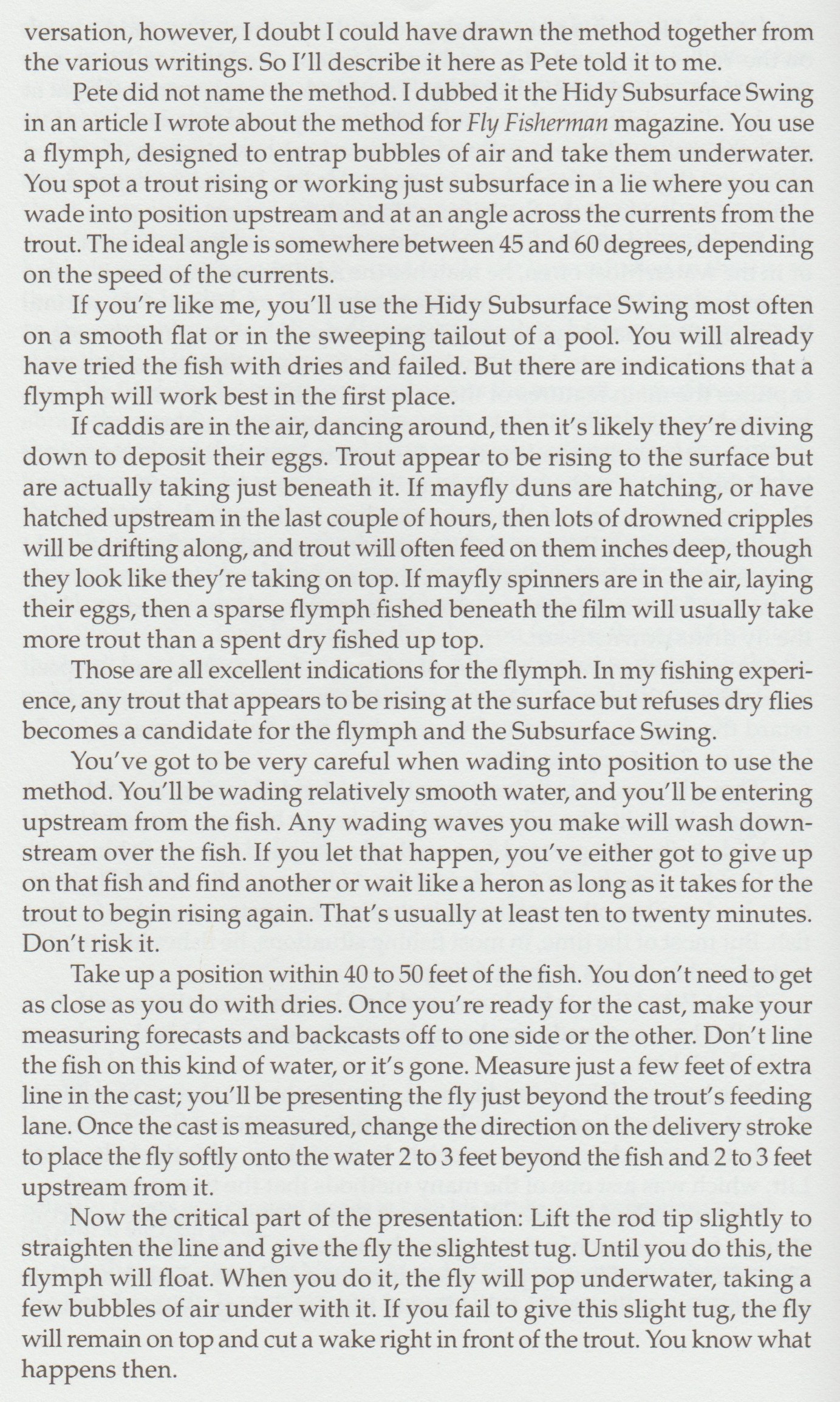 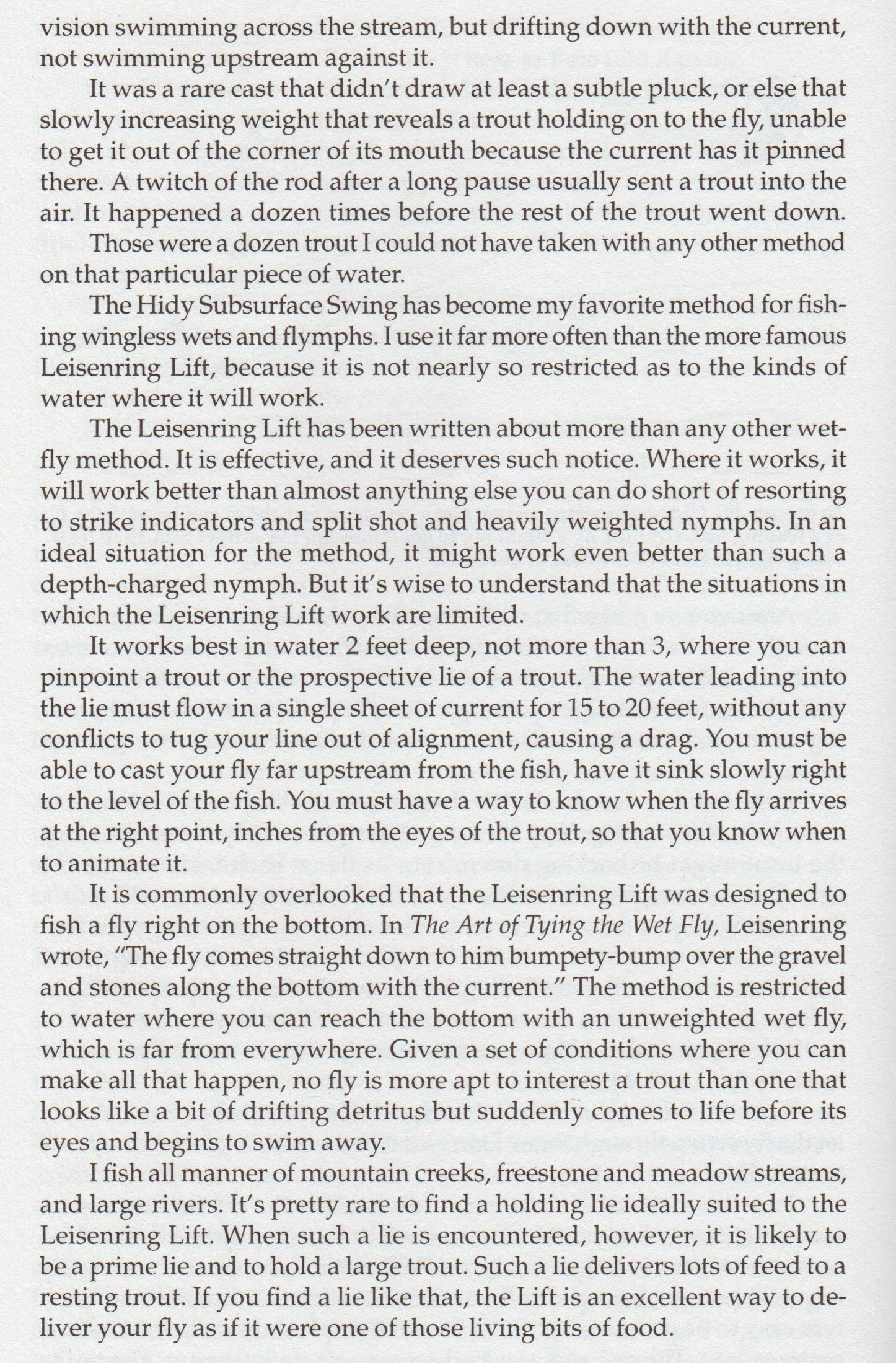 Most excellent post, Ruard!
Soft and wet - the only way....
Top

A couple of important clarifications in here ... thank you, Ruard.

Thank you Ruard. I have no scanner and that would have been too much for me to type.

Some of you have the revised edition of Hughes' 'Wet Flies'. Did he change anything in his description between the editions? Obviously there must have been a flymph fishing evolution too.

A lot of people fish and very few write about it. Those who write decide what is passed on to history. What was common knowledge yesterday, and not written down, might get lost in the mist of time. The reason for mentioning 'the Lift' but not 'the subsurface swing' might have been that they took the second tactic for granted? People were supposed to know and understand it?

Fellows,
This is a most excellent post (if I may borrow this expression from Dana?) esp. what Ruard has posted from Dave Hughes' book! Thanks Ruard!
Just like the "lift", the "Hidy Sub-Surface Swing" has some stout requirements about positioning ones self in the stream and fly presentation! Neither of which I am very good at! I can stand motionless like a heron and that does have some advantages that are not often talked about! So much so that I have noticed my legs are getting longer and yellower and scaly looking! Squawk!
Bill, your patterns all are wonderful and beautiful as always! I wanna tie like you when I grow up! And yes, your flies do look "Hidy like" and that is not an easy thing to do! I like them a lot!
Leaving you in slow, well-oiled flight,
Dougsden
Fish when you can, not when you should! Anything short of this is just a disaster.
Top

So many variables involved I wouldn't presume to split hairs on the effectiveness of one version over the other, & I doubt fish will parse the difference (they don't think like us). And I think after a fish or two the first version will pare down to closely resemble the second. I tie a jingler version of this, dying one half of a grizzly hackle with a brown pen to get the mixed color.
Top

And concerning the Liesenring Lift, I respectfully disagree with Dave Hughes's assertion "the method is restricted to water where you can reach the bottom with an unweighted wetfly". In my own experience I've found that activating the fly thus may motivate a fish to rise from much deeper water to take the fly -- particularly good when steelheading. Also, in the warm season of wee flies trout will be active in the upper water column over very deep water, so the method is always worthwhile as standard practice at the end of a swing, regardless the water depth.
Top

I just want to offer a link to a video on fishing the wet fly as a dry. This video is shot quite a few years ago and the fisherman now often ties a flymph to his tippet for the same kind of fishing.