It tickles me when my old stand by Soft Hackle shows me it still has a good amount of JuJu after so many years. My standard Muskrat in size 16 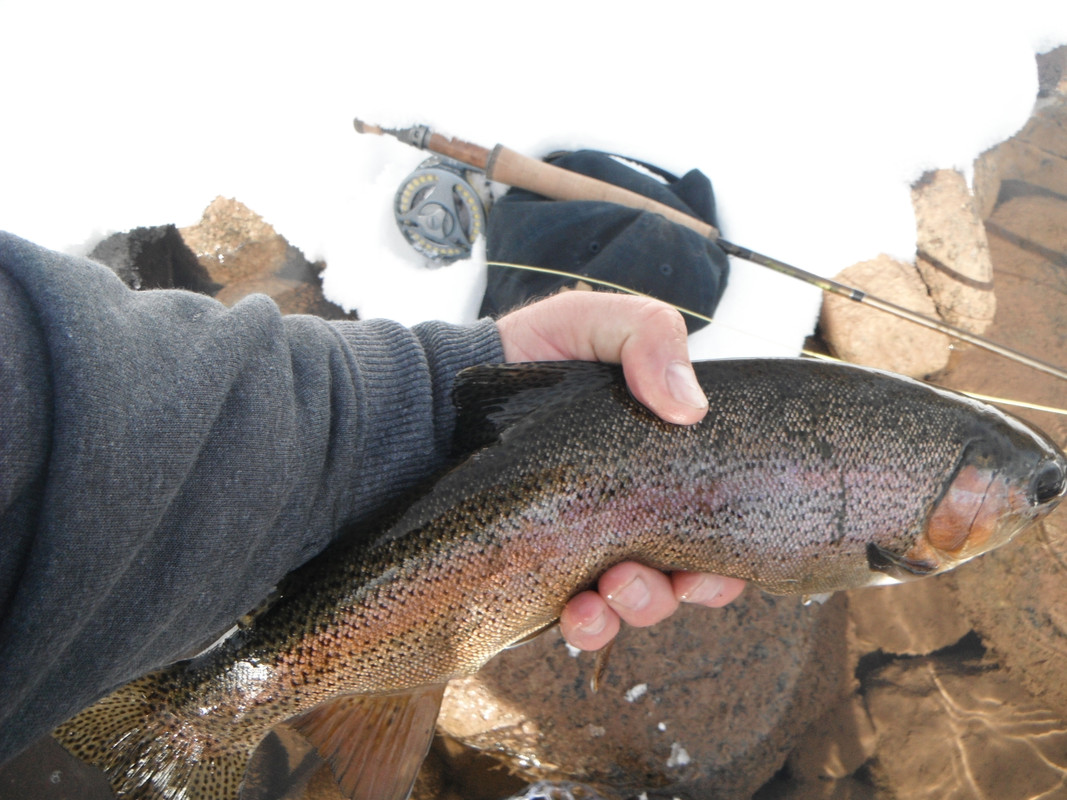 I tied a few in Dun hackle and also a few in Partridge. All three have done well for me for a number of years. The Dun does a bang up job for me when the little Gray midges appear. I tie it in a size 20 in that situation. 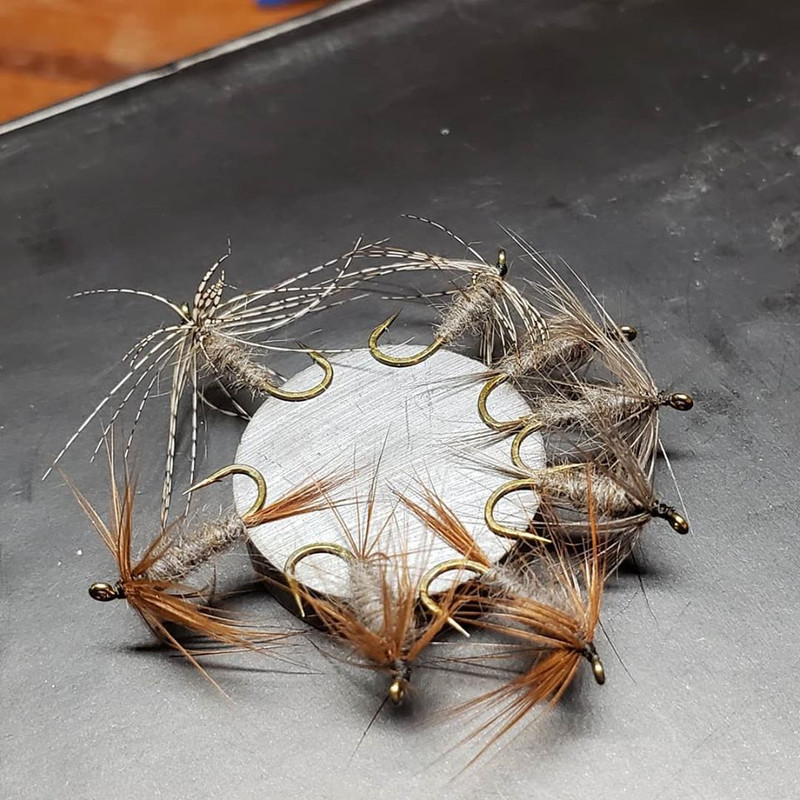 Do you use muskrat fur straight off the hide, or do you use packaged dubbing? It looks like you are using fur from the hide, with the guard hairs removed.

Thanks Ray! I take it from the hide. I am searching for a kit hide. I dont need one, but want one.
Top

Hi Wayne, those are great looking flies. Do you apply the dubbing as a noodle and pick it out a bit or use a split thread to spin it? I would think they would catch in just about any size. Thanks for posting them.

DUBBN,
I didn't need one either but I had to have one.

DUBBN,
Beautiful flies! Muskrat variations are all over my fly boxes.

Ray,
I most often use the prepackaged Roadkill Dubbing taken directly from the hide. 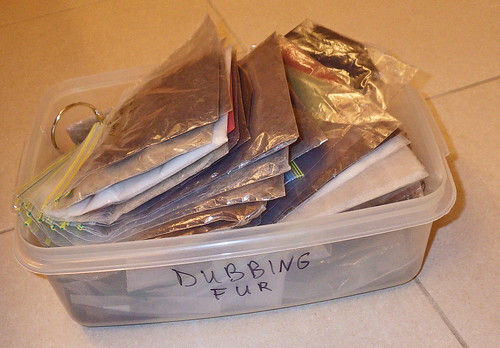 But the supply of plain muskrat is getting low, back to the hides.

On my kit muskrat flymph, it was directly from the hide with a dubbing rake!
Top

SenecaLaker wrote: ↑
Wed Feb 05, 2020 9:06 am
Hi Wayne, those are great looking flies. Do you apply the dubbing as a noodle and pick it out a bit or use a split thread to spin it? I would think they would catch in just about any size. Thanks for posting them.

Dave, I use a noodle. I apply small amounts to the thread, but I do not try to make them as tight as I would if I were tying an Adams dry. I find the "happy" spot in the application that is tight enough that I dont need a rib, and loose enough that fur can poke out and look like living fibers. In any event, the pattern works for me if it is dubbbed tight or loose enough that the fur starts looking like a trailing shuck.

This was a story I ended up writing when Bill Shuck asked me about the pattern. In hind sight I think he only wanted a recipe.

"When I was growing up, over 40 years ago there wasnt that big of a fly selection in Grand Junction Colorado. There was a Gibsons Sportingoods, Gene Taylors, and Coast to Coast Hardware. The one thing they had in common was that they all sold flies from the Cardinal Fly Company of JacksonHole Wyoming. Mind you, this is the name and location as remembered by an 8 year old boy.

My fathers two favorite flies were a Muskrat, and a Streamer called the "Brown Bear". The Streamer was tied in sizes 6 and 4 while the dainty little Muskrat was a miniscule 12 and 10. My dad believed these two flys would cover 99.9% of his fishing. I do know however, that when the fishing would get really tough he would use a size 12 Brown Hackle Peacock (Red Tag).

Skip forward 10 years. A flyshop opens in Grand Jct Colorado (1980?), It's bins are crammed full of all manner and size trout flys. I promptly bought a fly tying kit (bad mistake), and tying book by Jack Dennis. The stage was set, and for the next 5 years I tied all manner of wets. dry's, streamers and nymphs. I was a man on a mission. The more I tied the easyer it was to duplicate the more intricate patterns. At this point the old Muskrat of my fathers day was just a distant memory for me. It was a shabby little fly that was used by an old man that liked to drag it around a lake behind his boat, or fish it in the dark of the moon at night with his crummy fiberglass rod.

At the same time a "new" (for me) system of fly fishing was being practiced here in Grand Junction. Nymphing! I taught myself to nymph fish on some smaller creeks. It was oh so frustrating as I had no instruction. I had no clue how to make or attatch an indicator, nor would I have known what it was for. My brain kept telling me it's not a bobber. Out of desperation I developed a method of short line nymphing which served me well on the creeks and small rivers. My system is very similar to the Czech method.

I didnt fish much with my dad at this time. He was nearing his retirement and I was working hard at my job, plus starting a family of my own. When I did fish, I wanted to be on a river, while dad preferred his lakes. We never managed to see alot of each other.

One day as luck would have it my phone rang. On the other end was my dad. Wayne, your mom and I were driving back from lake So&So and burnt the bearing out on the trailor. "I hitched a ride to a Ranch house to call. Could you pick up a bearing, and bring it to me. I have all the tools and for the life of me can't find the extra bearing". "Ofcourse, see you in about Two hours."

Dad had picked a good spot to pull over, and we sat out to replace the bearing. When we finished dad opened a cooler and said look at these. There were a half dozen 12 to 14 inch Brook Trout. "I didnt know that lake had Brookies in it dad". He informed me it didnt. The fish came from the little stream that was right next to the road where dad had pulled over. He said, "why dont you show me that nymph thing you always brag about?" "I cant, I didnt bring my gear." Dad then convinced me to rig up his old fiberglass rod with a size 12 Muskrat as it was the smallest fly he had. It took me about 15 minutes and I doubled the fish my dad had caught in 90 minutes.

It wasn't until the internet, and by talking to people that frequent this forum that I learned the terms "Soft Hackle or Flymph". I didnt really understand why the Flymphs worked. All I knew was I could use them as a nymph, emerger, and in a pinch with a little floatant as a dry. I was happy in my ignorance not knowing that the fly represented Caddis so well, and does doube duty as mayfly emerger. It wasnt until I read a Sylvester Nemes book (cant remember the name), that the fog lifted and I was able to understand why the SH/Flymph worked so well.

Enough ramblings.
I call it a "Muskrat Flymph or Soft Hackle". I was first introduced to me as just "Muskrat". Thats my disclaimer. Dont wanna infringe on any copyright laws.

The pattern is still the same as when my father used it, only I never tie it larger than a 14. I tie it as small as 20, if I can find the right hen hackle. I dont rib it. I believe I have kept this pattern in tact as it is a thread to my past.

You will notice a picture of an Orange Flymph. This pattern came to being while I was trying to imitate the October caddis on the Lower Gunnison River many years ago. I still use it. It is tied in the same manner as the Muskrat except I use Orange haretron, and rib it with copper or gold wire. In addition I use an Olive Flymph the same way. Sometimes ribbed, sometimes not. The past few years I have started using Pheasant Tail SH's, along with Hares Ears. All have had great results even when tied with Starling, Partridge, Grouse, Brahma Hen, or Dun Hen . All of these patterns have a place in my Flymph box, but I always gravitate back to the drab, shabby uninspiring Muskrat."

DUBBN,
I didn't need one either but I had to have one.


I am down to a 1x2 patch of fur from a Muskrat I trapped maybe 45 years ago. Between salt, borax and the sun that hide lasted longer than the 12 year old that trapped it, thought it would.

That hide had been split a couple times when I shared with other tyers (Beginners). I knew I would need more this time last year, but have been procrastinating. I feel if I use another hide, it will be ...... for lack of words, unfaithful to that little muskrat from almost 50 years ago. Funny thing is, I did not start using fur from that muskrat for another ten years. That is when I started dabbling in fly tying.

I could never use muskrat from a bag, like I do opossum, rabbit, and squirrel. Holding a muskrat hide while cutting out dubbing makes this old man smile, and remember his long lost innocence.
Top

Great stories, I love to hear about peoples memories with their dads and granddad's. It always takes me back. So one question.....did the monks out west fly fish or did they use bait?