Clark's Spinning Block vs The Dubber

That is so <BLEEEEPING> cool!!! That is my new favorite dubbing twister.

Looks very impressive to me. I think I will stay with my simple dubbingblock.

but for me about 95% of my twisted dubbing is simply done with a dubbing hook or tool in a loop. I almost built one of the skateboard wheel twisters years back in my wood shop but instead just used one of my cordless electric drills to make wire dubbing strands.
Top

Wow. Wonderfully creative. Each possible problem address with a simple, clean solution. I love the light springs and the rubber washers. Elegant.
Instead of adding an idler pulley, you might find a 1/16" cross-section o-ring of the appropriate length to use as a belt. The nitrile rubber will also eliminate any chance of slippage. I don't see slippage as a real issue, but the rubber will likely hold up better over time.
When I get to work Monday, I will see if I can model this in ACAD, just for giggles.

Fellows,
This entire thread is sooo cool! Tom, your twister is boss! Quite an engineering feat! Very neat design too!
William, your blocks are to die for! So pleasing to the eye and a pleasure to behold! The orig. "Dubber" is quite unique and it's a shame that it did not catch on more than it did! I posed a question to Bill earlier this evening....what if this unit would have come out within the last year or so rather than 25 or 30 years ago? I think everyone on this forum would eventually own one just out of shear giddiness! You don't suppose there are a few thousand of these "Dubbers" tucked away in a warehouse somewhere just waiting to be discovered do you? Wouldn't that be a hoot!
Great postings friends and even greater conversations around them!
Doug in the Den
Fish when you can, not when you should! Anything short of this is just a disaster.
Top

Been a while since I was here. Missed all this great stuff. Getting caught up. Tom that is ingenious and does exactly what I was trying to describe. Fun stuff! Great thread!
I hate it when I think I'm buying organic vegetables, and when I get home I discover they are just regular donuts.
http://www.oldhatflytying.com
Top 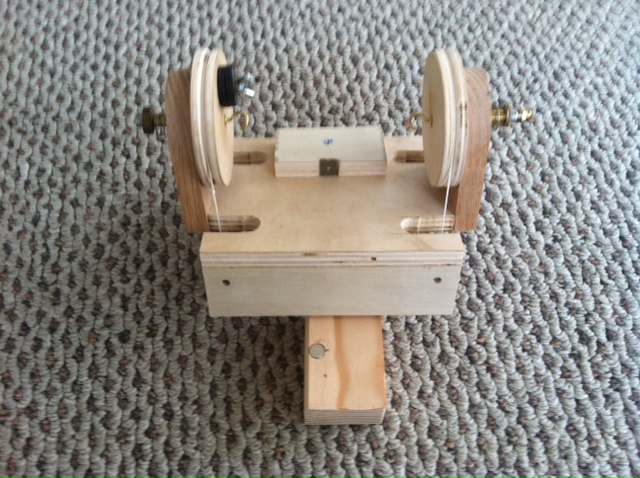 One last detail on the machine. I found the unsecured block a bit fiddley to work with. It wanted to slide around when I was teasing the dubbing into position. Lots of ways I could have addressed that, but what I ended up with was setting a small magnet into the back of the block, and a small strip of steel into a plywood backstop. That holds the block in place nicely, but releases easily to roll the block out of the way once the fur is trapped in the thread. The lower back edge of the block is planed off at a slight angle as well, to allow the block to roll out of the way easily. That might not have been necessary. Here, I am using the block to prop up the machine for the photo, and you can see the little disc magnet. Thanks to Ray for reviving the posting photos tutorial. I was going through Photobucket, which works but is a bit slower.
Top

Nice way to avoid shifting and sliding Thumb up!
One drawback to the direct post is there is a limit,
not sure what the numeric value is so, just something
to tuck away for reference later.

Okay, the original premise was to simply introduce a tool that I thought was an interesting historic artifact, maybe a stage in the creation of pre-spun bodies for use in flymphs and other flies, maybe nymphs ect. My assumption, given that The Dubber is essentially a Clark block with a molded plastic body and winding arm, was created in an effort to profit from the Leisenring technique, no harm in that, and offer a mass produced product that would further the ideas of Leisenring and Hidy. I'm afraid my assumption was a bit generous. The truth is, as I've discovered, is that someone appreciated the idea of trapping materials between waxed thread to create pre-spun bodies, and happy to add any type of materials or combination, like any of us might do in a dropped loop. It's a good idea, so why not promote it and create a device, marketed as the greatest dubbing innovation ever. So what I believed was a poorly designed Clark block is really not that.

So Eric found another "The Dubber" on an auction and sent me the link. Something I knew I would have to have. Essential for me was that it came with instructions and an explanation of purpose. The makers claim it solves all your dubbing issues. Makes dubbing far easier than before. Perfect for the novice or the expert. Limited only by the tiers creativity. Use straw, or glitter, or anything you can think of to create bodies. Slices, dices and chops...They do however point out the durability of the created bodies. That's true of the flymph body technique as well as dropped loops.

It may have had it's roots in the Clarks Block, clearly with the manner it's used and the storage cards, etc. But that's really where it ends. No understanding of the importance of underbody colors, careful use of dubbings to create the mimicry of hydrophobic fibers, density and orientation of fibers, etc. It does have a tapered shape, as anyone talking about dubbing a body will naturally assume is relevant. But it's not a modernized flymph block. Just a dubbing spinner, very much like all the other dubbing spinners used to trap dubbings between wires, threads, etc. The individual who created the spun bodies on the first model I showed was very talented and managed some nice, sparse, tapered bodies, using silk and understood the importance of the body construction, even while being limited a block that forces you to grind the fibers against the surface of the block binding fibers against themselves, creating your average 1980's noodles suitable for most all tying requiring a densely dubbed body. Seems a lot of trouble for such a result.

The documents included with this Dubber, sold by Orvis, illustrate a tool marketed to those unpracticed at dubbing loops or basic dubbing techniques. I'm a little disappointed, but shouldn't have been surprised.

The Dubber, as sold in stores for a very short time in the 80's. Note in the second Dubber, the pins are plastic. The prototype shown on the first page show a nail filed down as the top pin.

Well even though it's intentions aren't what you thought they were it's still very cool.
Top
Post Reply
72 posts