Tie2fish - I appreciate your comment. You're correct--I watched a video where Hans Weilenmann did a demo of the split thread technique. Do you know if he originated that technique?

Don't know if he originated it, but he surely has spread the word.
Some of the same morons who throw their trash around in National parks also vote. That alone would explain the state of American politics. ~ John Gierach, "Still Life with Brook Trout"
Top

I think the technique is much older than Hans or you and me!!!

I think Marc Petitjean originated this techniek or he spread it in the world of tying.

Hans has asked the question himself http://www.flyfishingandtying.com/forum ... onrequest/

I think Marc Petitjean originated this techniek or he spread it in the world of tying.

I seem to almost remember a previous discussion about this when someone claimed that Halford had utilized a similar technique with a needle in his table. I don't remember at all where that discussion ended. (Halford wasn't known as much of a fly tier).

My brain is shock full of partly and totally broken links. I have been reading since I was four, and lately all those letters seem to swish around in ultra high speed in no order at all.

Visited duck-duck-go and found this http://classicflyrodforum.com/forum/vie ... 0&start=20 Haven't read that before.

FlyFisherMann1955 wrote: ↑
Thu Feb 21, 2019 6:06 pm
Tie2fish - I appreciate your comment. You're correct--I watched a video where Hans Weilenmann did a demo of the split thread technique. Do you know if he originated that technique?

Ken,
After some digging...

F.M. Halford described "fibre-hackles" in Floating Flies and How to Dress Them (1886) that were essentially the same as what we today call a spun body. A length of waxed tying silk is first stretched around a pin stuck into the table. Fur is applied to one one half of the silk, then sandwiched with the other half of silk, and twisted tightly into a fur hackle. 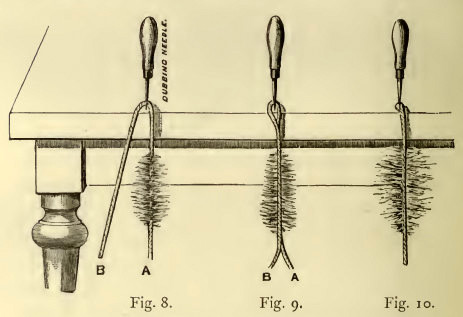 W.H. Lawrie credits G.S. Marryat (indirectly via G.E.M. Skues) for even earlier creation of fibre-hackles in All-Fur Flies and How to Dress Them (1967). Marryat's method created spun bodies (as with Halford and Leisenring), but it involved splitting the tying silk rather than doubling it.

Copied from All Fur Fies and How to Dress Them...

"This is a good juncture at which to describe methods of making a 'fibre-hackle', as Halford termed it, although in the early notes of that undoubted authority, the late G.E.M. Skues, its invention is ascribed to Marryat. But no matter whose the inventive mind that first devised the fibre-hackle, it is the means of using first-quality material for making very neat and effective wet and dry flies. . . . Briefly, the methods are as follows:

'Captain Marryat's Method
Take a piece of fine sewing silk and tie a knot at one end. Stick a pin between the strands into your table. About 3 inches from the pin untwist the silk so that the strands stand wide open -- enough to admit your placing a small quantity of fur-fibres or mohair between the strands of silk. Having done so, twist the silk and allow the fur-fibres or mohair to spin in like a wire brush, pulling out superfluous fibres as you twist. One turn close under the wings picked out and trimmed is all sufficient. (Extract from the holograph Notes of G.E.M. Skues.)'".

Note that the Marryat method creates a split-thread spun body that is separate from the tying thread, whereas the current incarnation of "split-thread" dubbing splits the tying thread itself. The current method is described in Leeson's and Schollmeyer's The Fly Tier's Benchside Reference (1998), but it must have been well established by then.

Nice research Phil!!!! I knew the method was older than all of us. Nothing new in fly tying today unless you want to consider Tupperware materials. I was just examining the latest greatest Tupperware jungle cock eyes ! Well at least they weren't splits....

I'm sorry it has taken me awhile to get back to this post. Here is a sample of the fly I mentioned (locally called the Green Butt), and similar to what Bob posted. In the past, I've tied these on scud style hooks; however, I'm now trying this wet/nymph hook. I hope it will improve my hooking percentage, especially when the fly is hanging straight downstream (at the end of the drift). 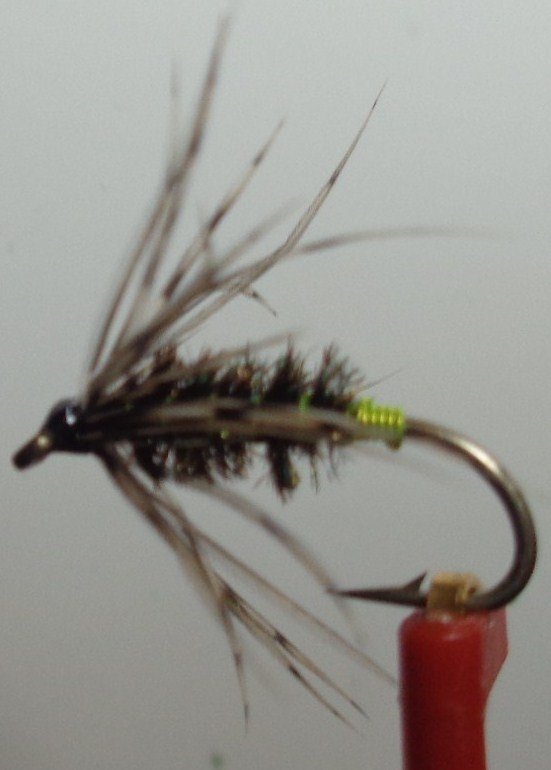