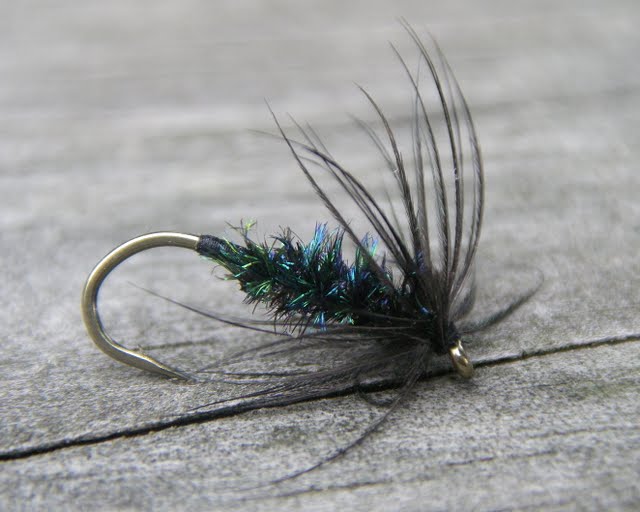 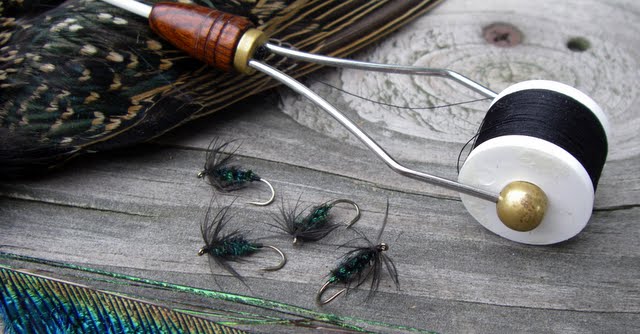 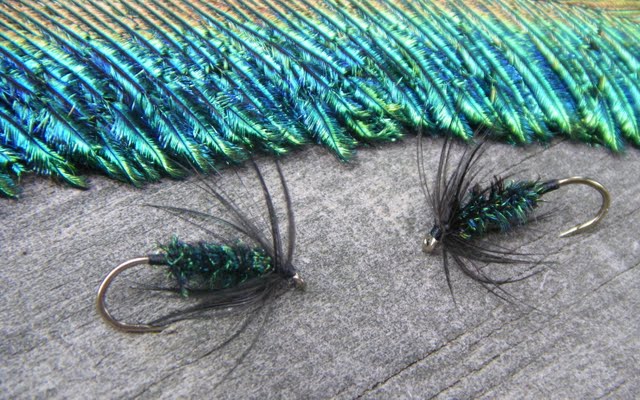 The body of these flies looks metalic blue-green in the right light. I tried to capture it in the photographs, but it doesn't show up a vividly as the appear in hand. It was difficult to capture in a photograph.

Detailed Tying Sequence:
1) Mount your hook in the vice.
2) Attach the tying silk, just behind the eye of the hook, with five snug wraps. Clip off the tag end.
3) Prepare a starling coverlet (wing/shoulder) feather by stripping off the small fluffy fibers at the base of the feather.

[optional step - Strip off the fibers on one side of the feather, if you want the hackle to be very sparse. I prefer a bit more hackle, so I don't bother stripping one side]

4) Tye in the prepared starling feather by it's stem. Leave roughly 1/8" of bare stem to make wrapping easy later. The tip of the feather should be facing out over the eye of the hook, with it's good side facing towards you. Use only three or four wraps to secure the feather in place. Clip off the excess stem.
5) Select five or six peacock sword fibers and tye them by the base, just behind the eye of the hook. Again only use four of five wraps to secure the sword fibers.

[Caution - The peacock sword fibers should be at least 3/4" long to allow wrapping. When clipping the sword fibers from the stem, be careful to grasp the fibers securely to keep the tips even.]

6) Wrap the tying thread back to the bend of the hook and forward to the tip of the hook point.
7) Grasp the tips of the sword fibers in a pair of hackle pliers and wrap them back towards the tying thread. I like to wrap the fibers up-and-over the hook, in the same direction the tying thread is wrapped.
8) Wrap the tying thread forward toward the the eye of the hook. The thread will counter-wrap the sword fibers, reinforcing the body. Leave enough room at the front of the body to wrap the hackle and form the head. Clip off the tips of any remaning sword fibers.
9) Wrap the starling hackle back towards the tying silk. Use only one or two wraps of hackle.
10) Wind the silk forward though the hackle fibers, being careful to wiggle it back and forth. This prevents the silk from matting down the hackle fibers.
11) Whip finish with only three or four wraps.
12) Clip off the tying silk and add a small drop of head cement.

It's amazing how I can make such a simple fly sound so complicated.

Don't let the tying steps fool you. It is really simple to tye once you get the hang of it.

I am hopeful that this pattern will work well as a terrestrial pattern. This is a great time of year to start fishing small terrestrial patterns. I think this fly has the look of a small beetle.
Last edited by letumgo on Wed Dec 22, 2010 3:38 pm, edited 1 time in total.
Ray (letumgo)----<°))))))><
http://www.flytyingforum.com/index.php? ... er=letumgo

It is a great wet to imitate some dark caddis emergers or egg layers. I have long fished the Starling and Herl as a pattern for these caddis. If I were going to fish a peacock pattern for a small beetle I prefer the winged(sword) version of the Loves Lure from New Zealand.
Top

Howdy Ray;
Great lookin flies, have a newbie question for ya ... The 'swords' that you mentioned, are those pictured in the middle photo and what is the differance between the 'swords' and hurl? OK, two questions...shoot me

Just trying to expand my knowledge base.
Thanks,
hank
Striving for a less complicated life since 1949...
"Every day I beat my own previous record for number
of consecutive days I've stayed alive." George Carlin
Top

Swords are shorter, more metallic and come from a different type of feather.

Hank - The peacock herl and sword both come from the same source...a peacock's butt. (*humor not sarcasm*)

However the feathers are quite different in their appearance and structure. I have doctored this photo to show where the feathers come from on the bird.

Don't want to butt in, but thanks for posting that Ray - didn't know that....

Andrew]
"Inspiration exists, but it has to find you working." ~ Pablo Picasso 8)
Top

Thanks for the photo Ray.
So Hurl is the "show an go' feathers an the swords are more of yer 'diryt dancin' feathers ...

The feathers in the second photo are swords???

EDIT: DOOOOOOOOO... homer moment, just saw and looked at the links you were kind enough to send along. Thanks again Ray.
hank
Striving for a less complicated life since 1949...
"Every day I beat my own previous record for number
of consecutive days I've stayed alive." George Carlin
Top

Yeah. The fibers on the sword feathers tend to be shorter (1/2" up to 3" long) versus the herl fibers which tend to range from 4" up to 8" long. The sword fibers have a metallic-blue tint to them, while the herl fibers tend to be more metallic-green (or if you are really lucky metallic-bronze which is hard to find). Sword fibers are generally used for tails (such as on a zug-bug) or wings (such as on an alexandria). They can be a pain to wrap, due to fibers being shorter and stiffer, when compared with herl.
Ray (letumgo)----<°))))))><
http://www.flytyingforum.com/index.php? ... er=letumgo

Thanks Ray, that was really informative. I had no idea where the swords came from. Did you get a load of that blue breast clear up to the neck? Has anyone come away with some of those?
Kinda wondering,
Dougsden
Fish when you can, not when you should! Anything short of this is just a disaster.
Top
Post Reply
19 posts