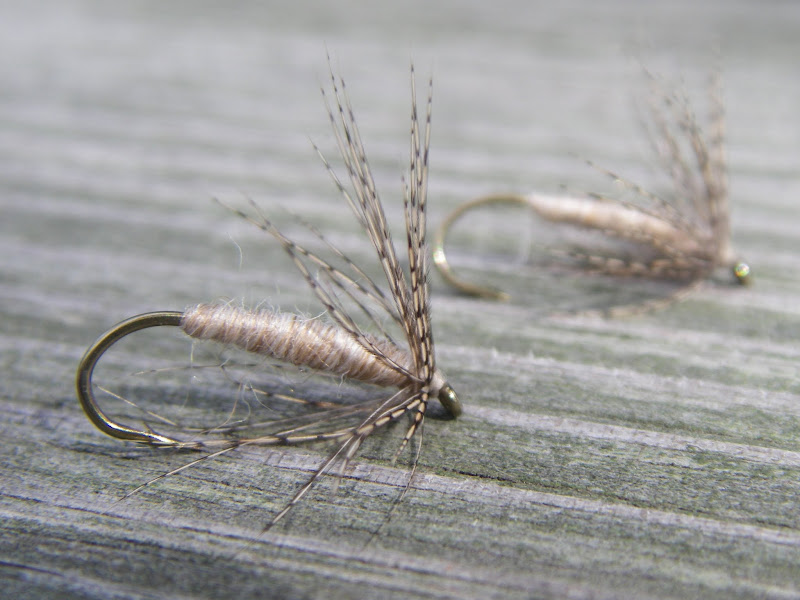 This fly is an adaptation of Frank Sawyer's "Killer Bug" nymph pattern. I have used the copper wire as an underbody to give the pattern weight and help form the taper of the body. The pattern is very easy to tye (see instructions below):

TYING INSTRUCTIONS:
1) Mount hook in vice
2) Wrap a single layer of small copper wire around the shank of the hook. The wraps should cover approximately one-third (1/3rd) of the hook shank. Clip off the exess wire and then use your finger nails to pack the wraps together tightly (close toughing turns). Slide the wire core up towards the front of the hook shank, but leave roughly one-eighth inch (~3 mm) to leave room for the head.
3) Mount your tying thread just behind the eye of the hook. Make only five wraps, to minimize thread bulk.
4) Prepare a partridge feather by stripping off the fuzz at the base of the feather. Tye in the feather by the stem. Leave a little bit of unhackled stem showing to make wrapping easier later. Slide the copper core forward until it touches the thread wraps.
5) Wind the tying thread gently over the copper core, and form a small thread ramp at the back edge of the wire. Wind the thread forwards to the front of the copper underbody. Special note - Using "gentle" thread wraps helps prevent the tying thread from forcing its way between the wraps of copper wire. The thread ramp at the back of the wire will help keep the wire in place and also help form the taper of the body.
6) Tye in the wool yarn over the top of the body. Firmly wrap the tying thread to the barb of the hook and back to the front of the body.
7) Wrap the wool yarn forward forming the body. Secure the wool with a couple turns of tying thread and trim off the excess.
8) Grasp the tip of the partridge feather in hackle pliers and fold the hackle fibers to one side. Wrap the hackle back towards the tying thread. One or two wraps should be adequate.
9) Secure the hackle by winding the tying thread though the hackle fibers. Wiggling the thread back and forth will prevent matting of the hackle fibers. Clip off the excess hackle.
10) Form a small head and whip-finish. Clip off the thread and add a small drop of head cement.

Makes one think of many variations on that theme, wool yarn body, various hackles etc.

Beautiful fly and perhaps a good variation to the killerbug. Suggestion: a rib of red copperwire.

When the fly is wet, it will be much darker???

Greeting
There will allways be a solution.
http://www.aflyinholland.nl
Top

Very nice flees, Ray. If it is the real 477 I know of one up above raising his voice in protest. It will forever be reserved for another bug.

I found a yarn of about the same colour intertwined witf purple instead of the pinkish synthetics. I hope that my grayling will co-operate...

Ruard - I haven't gotten this fly wet yet. I didn't realize that it would darken significantly. I will have to try the red-ribbed version. Sounds like a nice variation.
Ray (letumgo)----<°))))))><
http://www.flytyingforum.com/index.php? ... er=letumgo

Some people say that it is the colour of the copper wire, and how it blends with the wool , that is the secret of the Killer Bug. It could be true, but most important is what is in the other end...and now it will be you!

Ray--wonderful looking fly, but I'm hoping to visualize your technique a bit better--if I'm understanding correctly, you lay down the copper wire in relatively open turns down the full length of the hookshank (kind of like a stretched-out Slinky), then "smoosh" (technical terrm

) the wraps together and place the core where the thorax of the fly will be. What's the advantage of this over a simple "wrap-in-place" for one-third of the hookshank?

Otherwise, I hope you post another pic once you have a chance to get that one wet...

Creationbear - You understand the technique perfectly. I try to wrap the wire as close to touching as possible, but find there are still small gaps (my eyesight ain't what it used to be). All of the tiny gaps easily disappear when you "smoosh" the wraps together at the end. In otherwords, do the wraps quickly, then perfect them after they are done. Just a way to make the tying process fast and efficient, yet achieve nice results. I am sure the fish won't care either way (rough and ready works just fine).

Ray-- Excellent, thanks for elaborating: that sounds like a great technique, especially for a "slow" tyer like myself. Otherwise, I'm very intriqued by the idea of that "internal" wire providing a bit of depth/segmentation to the proceedings--I have to admit that now that I'm playing around with really beautiful, translucent dubbings lately I have a hard time covering then up with an external counter-wrap of wire.
Top
Post Reply
43 posts