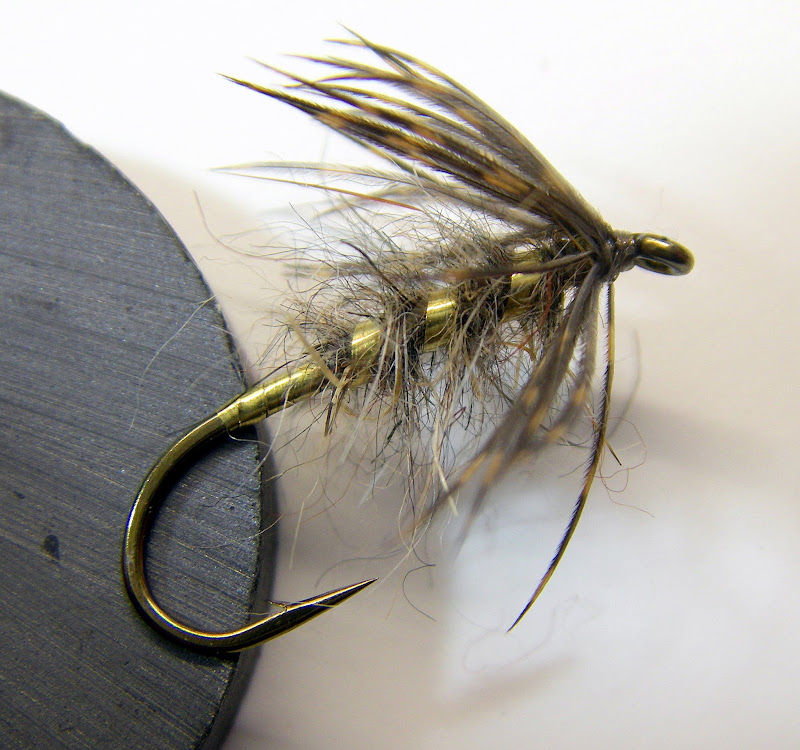 PS - I was trying to make a more vintage looking fly. I think this would look really interesting on a sneck hook. Anyone want to try?

TYING INSTRUCTIONS:
1) Mount hook in vice
2) Attach thread to hook, just behind the eye. Five secure wraps are plenty.
3) Prepare a Grouse feather by stripping off the fluffy stuff at the bottom. Turn the feather so the good side is facing you, with the tip pointing upwards. Strip off the fibers on the right edge of the feather. There should only be fibers on the left side of the feather.
4) Tye in the feather by the stem, with the tip extending out over the eye of the hook. The feather should have the good side facing towards you.
5) Make five more wraps towards the bend of the hook. Tye in a piece of flat metal tinsel with secure thread wraps, and then wrap the tinsel back to the bend of the hook and forwards to the tying thread. Secure the tinsel in place and fold the tag end back over the hook shank. DO NOT TRIM OFF THE TINSEL - IT IS NEEDED LATER FOR THE RIB.
6) Wrap the tying thread back to the where you want the body to begin. Dub the thread with hares ear dubbing (twisted tightly onto the tying thread) and wrap forward, forming the main body of the fly.
7) Wrap the metal tinsel forwards over the dubbed body, using open spiral wraps. The gaps between each wrap should be a little wider than the tinsel being used.
8) Secure the tinsel rib with your tying thread, then trim off the excess tinsel. You can either cut it, or a better way is to simply wiggle the tinsel back and forth until the metal fatigues and breaks off. This method is preferred, since it eliminates the sharp end which could sever your tying thread.
9) Brush the body of the fly VIGOROUSLY with a piece of velcro. The teeth of the velcro will pull the dubbing fibers out from between the tinsel rib, forming a buggy body.
10) Grasp the tip of the feather with hackle pliers and wrap the hackle back to the front of the body.
11) Wrap the tying thread forward thru the hackle, binding it in place. Clip off the excess hackle.
12) Whip finish a small head and add a drop of head cement, or clear nail polish for durability.


SPECIAL NOTE ABOUT THE NAME: I had initially set out to design a fly to be named "Bite My Shiny Metal Ass" (Futurama reference - a phrase often used by the robot character named Bender). Anyway, I wanted a pattern with a prominent metal tag (i.e. - the ass part). I tyed a couple different versions and settled on the proportions shown in the fly shown on the first page of this thread. The finished fly is roughly half tinsel tag and half dubbed body. These were the just the proportions that made me happy.

One of the things I like about the pattern, is how the dubbing will fall back over the tinsel tag, once the fly is fished. I think the tinsel will reflect the light back through the dubbing, creating the illusion of translucence.

Once I looked at the finished fly, I changed the name. What started out as a humorously-named fly, ended up having a "vintage" look to it. Thus the new name became "Heritage Hare & Grouse".

PS - I'd still like to design a pattern called "Bite My Shiny Metal Ass". Imagine the look on their face, when I answer the guy who asks "What did you catch that fish on?"...

You sure do have a boatload of pretty to put into those flys you keep crankin' out.
hank
Striving for a less complicated life since 1949...
"Every day I beat my own previous record for number
of consecutive days I've stayed alive." George Carlin
Top

I especially like the liberal use of wide tinsel. For certain conditions I think a variation in tinsel can be the difference in interesting fish. Just look at pictures of Big Jim's and Pete's original flymphs.
Top

NOW that's FUNNY!!!!!
gotta be the ugliest hook ever invented...........
You fly is GORGEOUS! Ray.............simply OUTTA Sight! Pure class.....i just love flies on regular bronze hooks that incorporate the use of colors just like you've used here. Black, and Silver and Gold and Blued.....red, green.....all that stuff is all fine and dandy.....but when you use earthy colors and materials like you did.....a regular bronze hook cannot be beat. Fantastic job.

beautiful fly, I'm impressed with the head with 6/0 about how many wraps on the head? Do you half hitch or whip finish?
Top

Thanks. The head is whip finished (four wraps) and then a coat of Sally Hansen's "Dries Instantly" clear nail polish. This stuff penetrates the thread wraps and dries in under 30 seconds. Good stuff.
Ray (letumgo)----<°))))))><
http://www.flytyingforum.com/index.php? ... er=letumgo