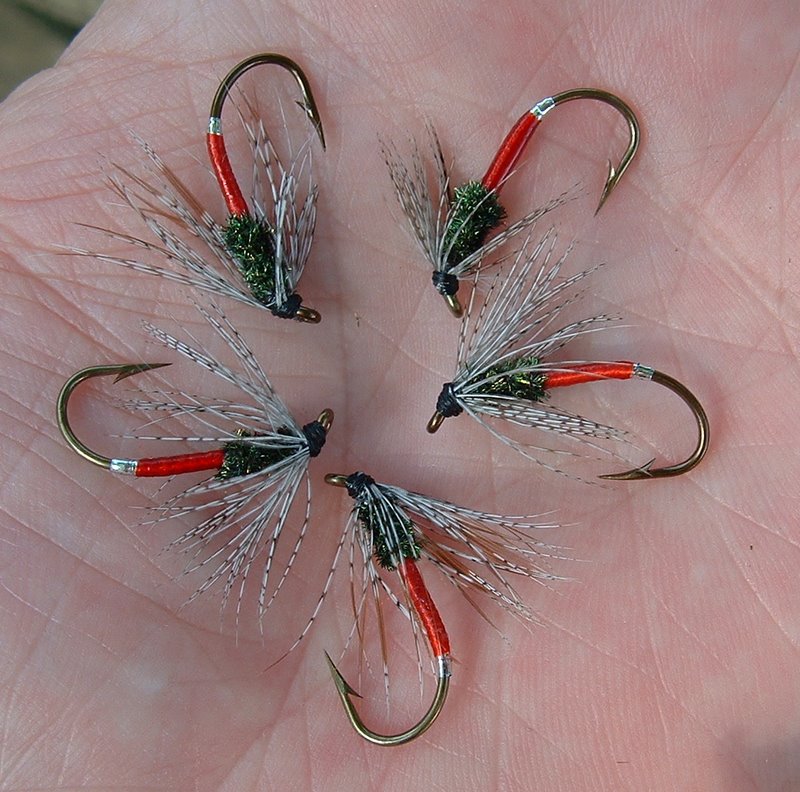 The idea of having the tinsel underbody (to make the silk look more translucent from the light reflected back from the tinsel). John Dunn used in his "Sunshine Oil" to get a similar effect. I have been temped to try a small drop of olive oil, or vegetable oil on the silk to see if it made the silk look different, but I've never tried it.

I have been playing around with these flies, and I now give the silk a thin coat of superglue. I bought a small bottle of Locktite Super Glue, which has a nice brush applicator. I find that the super glue makes the body smooth as glass and makes the silk body very durable. After you finish the rear body (before beginning the thorax section), give the body a light coat of super glue and set it aside to dry. Tye up another one and coat it in the same manner. By the time you tye the rear body of the second fly, the first one will be dry and you can then finish the first fly. It takes a few minutes longer to finish each fly, but they are much more durable and will save you a lot of time on the stream.

If you look carefully at the photo of the red ones, these flies had the superglue treatment on the silk. Once you get the hang of it, they should all look like the fly at the 1 O'Clock position (nice smooth body).

Durability is one of the reasons I started giving the rear body (silk part) a thin coat of super glue. I did not want to rib the fly or tye any band over the back of the fly. This type of silk has a tendancy to get frayed after a half dozen fish (or one with really big teeth). The super glue has eliminated that issue and maintains a rib free abdomen. I've tryed tying the fly with a rib over the silk and I just like the appearance better without the rib. If you use a rib, I recommend using a metal rib (flat tinsel) instead of mylar tinsel. I've found the metal tinsel to be more durable than the mylar tinsel.

I like to use Kreinic silk in these flies. I bought every color they had last year (2007), before they stopped selling it. Kreinik has discontinuted this line of silks, but they still list the sets on their website. They may have a couple left, but in the future I will need to find another silk to use. 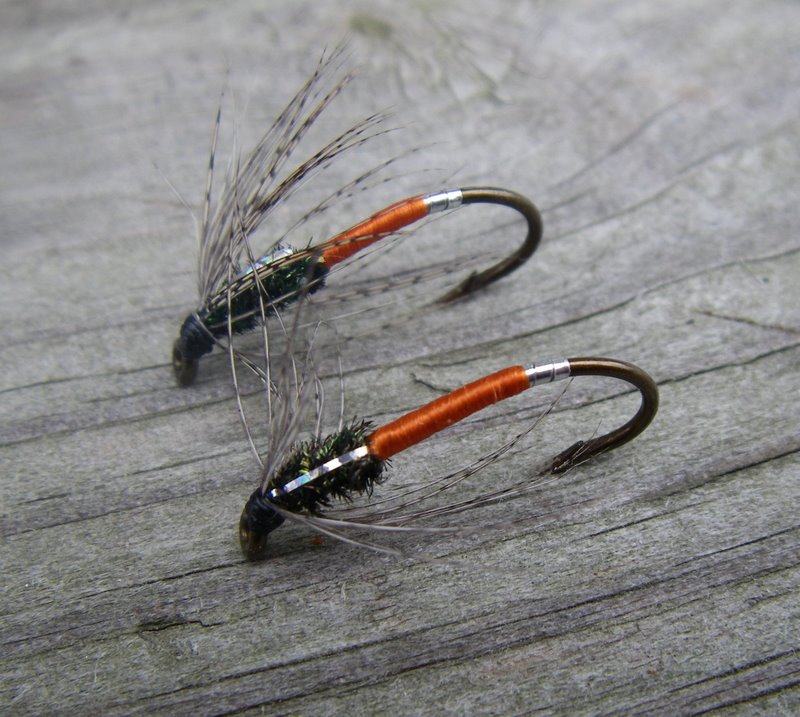 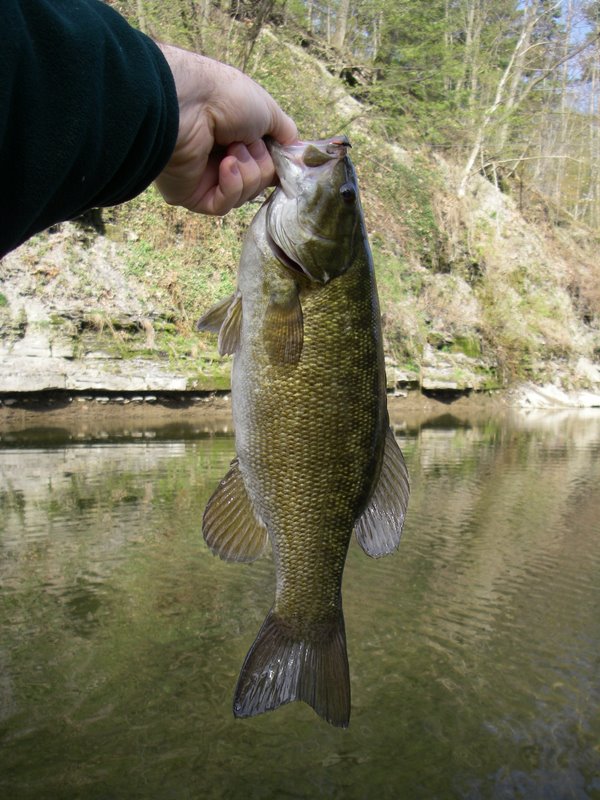 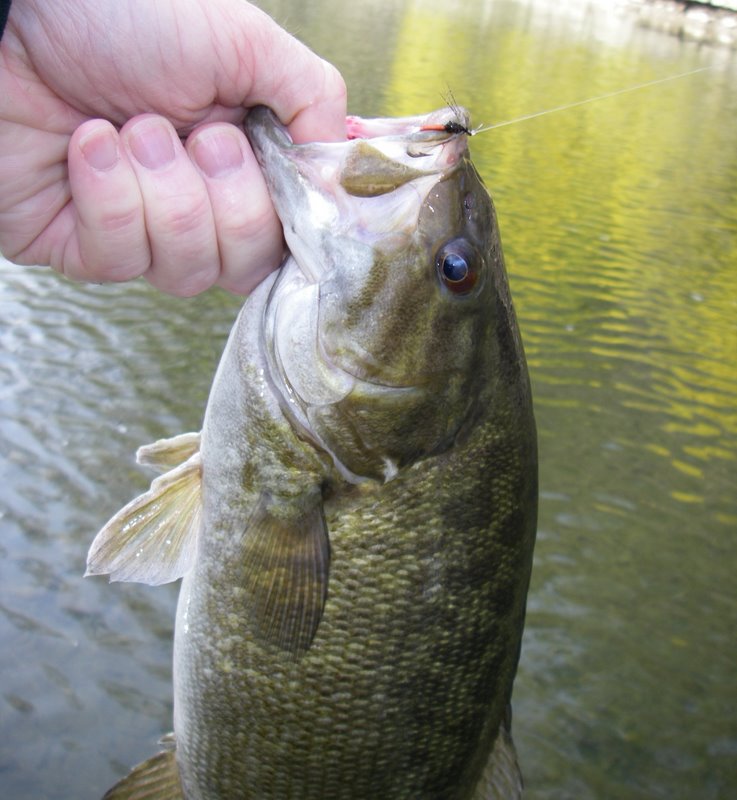 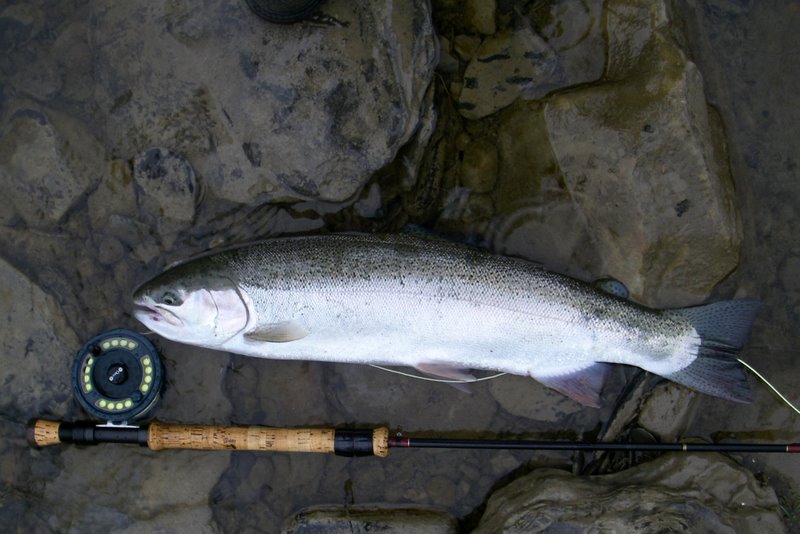 Thanks for copying all these over, but this one especially.
Bob
Top

I got some stream time this morning and hooked into some steelhead. Fishing was kind of slow until I tyed on a PYP (Partridge-Yellow-Peacock) soft hackle fly. I then hooked into three nice fish (lost three others). I saw my first bass on the stream today, so the steelhead won't be around much longer.

Well done Ray. Thanks for sharing.

Simply Superb all the way.

Ray- this a great post. Thanks for the instructions and all the pics. Can I ask what your favorite knot for tying these flies on is? I can see it in the last pic, but I can't quite make it out.
Top

I use a Duncan Loop knot almost every time I tye on a fly. The Duncan loop knot will seat on the line, but you have to be careful when tightening up the loop. I usually tighten in a few inched up the line and then snug the knot in place with my thumb nail. Then carefully grip the knot between your thumb and fore finger and slide the knot down the line to where you want it. I then pinch the fly in one hand and the knot in the other (with the knot still between 1/4" to 1/2" open) and pull tightly in opposite directions. Be careful not to pull the fly without holding onto the knot itself. If you pull the fly and the main line, the knot will slip down to the eye of the hook.

The knot can become seated against the eye of the hook after a fish or a snag has pulled against the fly. The smaller the line size, the more this seems to be an issue. In most cases, I can grip the knot with my thumb nail and finger and pull it back up the line after catching a fish. I generally fish with 6 lb to 10 lb fluorocarbon tippet. The fluorocarbon material may behave a bit differently than mono, in terms of knot slippage.

I use the knot slippage to my advantage when going after large fish with lighter tippets. I think the knot slippage helps take up some of the initial shock when a large fish hits a fly. I do quite a bit of steelhead fishing on 6 lb tippet with good results with the Duncan Loop Knot. It may be my imagination, but it is one of the reasons I like the knot.

The tag end (the part trimmed off after tying) of the Duncan knot tends to be very small (around 1/4" to 1/2") once you get the hang of tying it. That minimizes the amount that gets trimmed off the tipped each time you need to retye a fly onto the line.

I also found a video for the Duncan Loop knot that may be useful to others:

The Duncan Loop will end up seated against the eye when subjected to the pressure of fighting a fish, or pulling against a snag, or whatever. There are loop knots out there which have nearly 100% strength when tied correctly and don't slip- such as the "Non-Slip Mono Loop". Although I don't use this knot, I mention it here for completeness. I tried learning that non-slip knot from a book, but had difficulty getting the loop size right. Mine always came out huge or too small when I tightened the knot. I did a quick Google search on the knot name and found a great You Tube video illustrating how the "Non-Slip Mono Loop" is tyed. Now that I see the knot being tyed, I will have to give it another try.