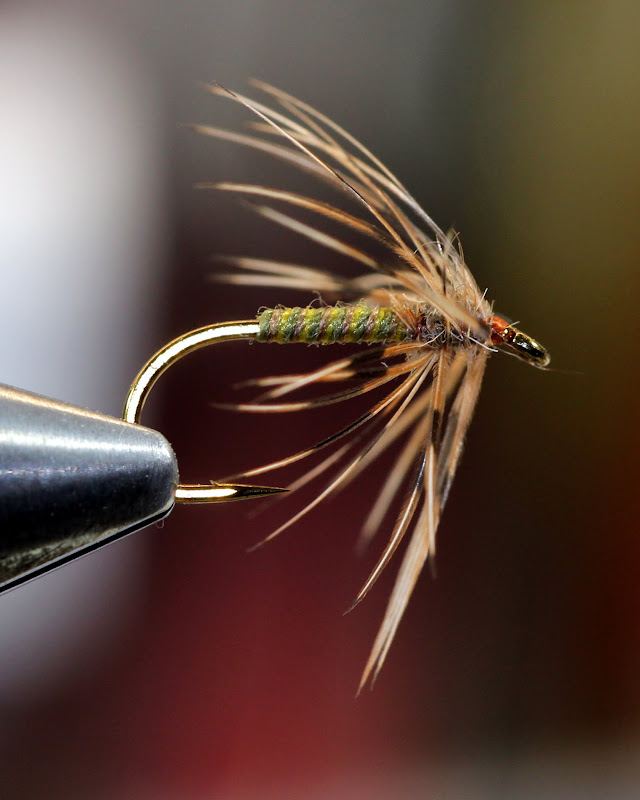 The tread darkens slightly when it gets wet, but it does not change colors dramatically in the way that Pearsall's silk does.

DETAILED TYING INSTRUCTIONS / SBS:
1) Mount hook in vice and cast on the tying thread with five wraps. Trim off the tag end of the thread.
2) Prepare the Prairie Hen hackle by stripping off the fluff at the base of the feather. Size the hackle (barbs roughly one hook length) and then strip off the fibers along one side. Mount the prepared feather, by tying it in by the stem. The feather should be hanging out over the eye of the hook.
3) Cut three equal length strands of the Gutemann polyester thread. Secure them to the top of the hook shank with closely touching wraps of the tying thread. Wrap the tying thread all the way to the back of the body (roughly midway between the barb and the point of the hook). Then wind the tying thread forwards to where you want the thorax to begin. For proportions, I like the abdomen to be roughly 2/3rd of the length of the hook shank. I like the thorax to be roughly 1/3rd of the shank length.
4) Grasp the three strands of Gutermann polyester string and draw them tightly together in parallel strands. Wrap the three strands forward in close touching turns, making sure the segmentation does not overlap (easier said than done). When you get to the tying thread, secure the three strand with a couple wraps and then clip off the excess.
5) Dub the thread with a thin layer (noodle) of hares ear dubbing and then wind forward to the eye of the hook and back to the rear of the thorax. This thorax will have two layers of dubbing (one forward and one back), so it is important to keep the dubbing noodle pretty thin.
6) Using hackle pliers, grasp the tip of the hackle and then wrap in open spirals back to the rear of the throrax. You should get about three or four turns of hackle before reaching the back of the throrax.
7) Wrap the tying thread forward thru the hackle to the eye of the hook. The tying thread will cross over the stem of the hackle, reinforcing the hackle, making for a durable fishing fly.
8) Form a small head with a double whip finish of tying thread. This should be plenty strong enough for fishing, without the need for head cement.

By the way, I'm joking about the "Feeler/Antenna" component. I was just annoyed to see the hair sticking out of the head. I couldn't see it with my naked eye, but the camera can see it just fine (grrrrr).

Dougsden - Thank you for the Prairie Hen hackle. Beautiful stuff. I love the rich golden brown coloration and the dark banding. It makes for some lovely hackle.
Ray (letumgo)----<°))))))><
http://www.flytyingforum.com/index.php? ... er=letumgo

Ray, that is simply gorgeous. I really enjoyed this one!
Top

Ray,
Beautiful, innovative fly. The red head is a nice touch. Too bad the whole thing is totally ruined by that piece of lint.

it's only a fishing fly.

Now, that's a good looking fly--I'll hope for a report on how the body holds up between fish...no doubt you'll get a lot of data.

Ray,
My pleasure in supplying the P.C. This stuff is kind of a mystery. I rec.'d an entire skin this past fall from from a local fellow who hunts out west every year. Yes, it was a legally taken game bird. Can you buy Prairie Chicken skins or at least plumage from various vendors? I haven't even begun the basic research into this. Jim S.? I haven't even gone to your web-site to look around. But I think I will right now....
Ray, this pattern looks wonderful! I love the subtle color differences in the body of your pattern. I can only imagine the beautiful combinations yet to come from a seemingly endless supply of Gutermann polyester threads. What a creative bunch we are blessed with here on the forum!
Keep'm rollin' Ray,
A fan always,
Dougsden
Fish when you can, not when you should! Anything short of this is just a disaster.
Top

-well done, as always. Pretty fly. Thanks for showing.
Top

Oooo, that's fancy. I like the diversity of colors and tones in a sparse little body, but this is really tidy. Another in a long line of great posts. You amaze me daily. As does everyone on this forum, posters and critics alike. Has it ever been this prolific? Brilliant.

w
"A man should not try to eliminate his complexes, but rather come into accord with them. They are ultimately what directs his conduct in the world." Sigmund Freud.
www.WilliamsFavorite.com
Top
Post Reply
11 posts