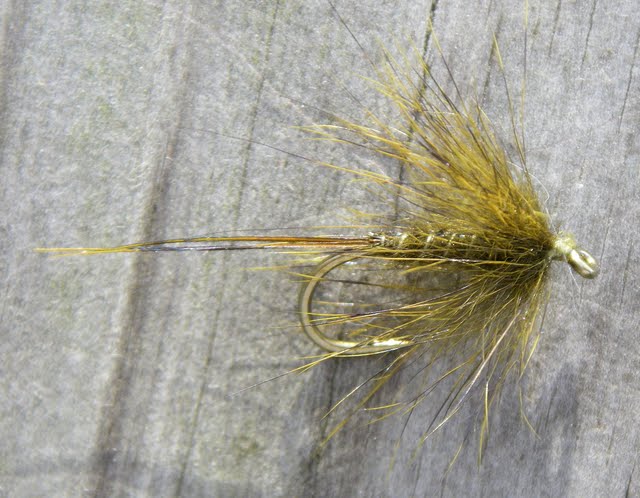 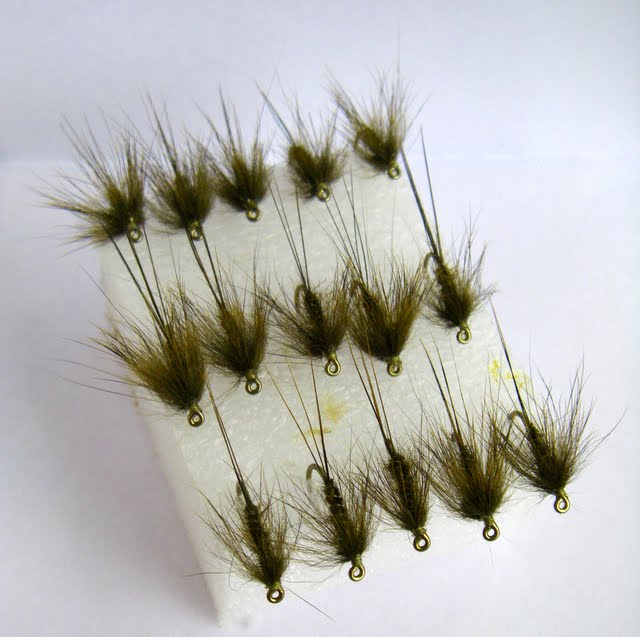 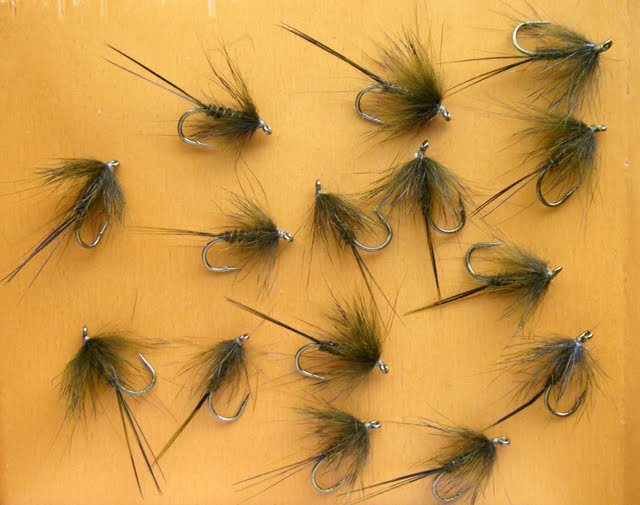 These flies were tyed as part of the IBF Hair Hackle swap.

Detailed Tying Instructions:
1) Mount Hook
2) Attach silk thread to the hook roughly one hook-eye distance from the front of the hook. Leave ~2 to 3 mm (~1/8 inch) of bare hook shank behind the eye of the hook to minimize build-up later. Leave this area of the hook bare until the final head is formed.
3) In closely touching turns, wind the silk thread 1/3rd of the distance back towards the bend of the hook, then wind it forward to the tye-in point. (This will build up two solid layers of silk thread under the front 1/3rd of the body which will later help form the taper of the body).
4) Tye in three or four strands of pheasant tail fibers. (The length of the tail is measured to be equal to the full length of the hook. The tail extends from the end of the straight part of the hook shank.) In closely touching turns, wrap the silk from the tye in point, back to the bend of the hook and forward to the tye in point. Leave the butt ends of the pheasant tail fibers hanging out over the eye of the hook. They are folded over the back of the fly in a later step.
5) Wax the silk thread and dub about 75 mm (3 inches) of the thread. The dubbing should taper from thick (next to the hook) to very thin (near the bobbin). Wind the dubbed-thread to the bend of the hook forming the body. Ideally the dubbing will run out right at the bend of the hook, leaving just the bare silk thread.
6) Fold the tip-ends of the pheasant tail fibers back over the top of the body of the fly (forming the back and tail of the fly). Wrap the bare silk thread forward (open wraps) to secure the pheasant tail fibers over the back of the fly. As you wrap the silk foward, the open wraps will will form the body segmentation.
7) Form a 50 mm (2") long dubbing loop and wax the loop. Wrap the silk thread forward to the eye of the hook.
8) Insert a dubbing twister into the open dubbing loop. Clip off a small clump of squirrel hair from the hide and place it into the butts into the dubbing loop. Carefully distribute the hairs to form a thin ribbon of hair 25 mm (1") long. The hair should radiate at 90° from the dubbing loop (perpendicular).
9) Twist the dubbing loop until the hair is secure and then wrap it forward to the eye of the hook. As you wrap the dubbing loop forward, use you off-hand to pull the hairs towards the back of the fly. Otherwise the hairs will get trapped under each following wrap.
10) Secure the dubbing loop and clip off the excess.
11) Form a neat head.
12) Whip finish and clip off the tying thread.
13) Brush fly with a velcro strip to frizz the body.
14) Pull the fur hackle collar out of the way with your off-hand and add a drop of head cement to the head to finish the fly.
Ray (letumgo)----<°))))))><
http://www.flytyingforum.com/index.php? ... er=letumgo

Very nice tying, Ray. You have quite an army of flies, there. All ready for action.

Mark
"I have the highest respect for the skilled wet-fly fisherman, as he has mastered an art of very great difficulty.” Edward R. Hewitt

Sweet! Looks like your tags are also ready (your background). I like the idea of including the small photo of the fly on the toe-tags. I may steal that idea for mine as well.
Ray (letumgo)----<°))))))><
http://www.flytyingforum.com/index.php? ... er=letumgo

Ray, my hair-hackles are coming out about as dense as yours, which from what I've seen is pretty common. It makes for a good overall proportion on this one for sure. I'm glad you found these a challenge. It's an inspiration for the rest of us who are struggling with this particular swap.

Yes, Hans, I know you're not struggling. Maybe before the next swap I'll try to find a pattern that might give you some trouble. I'm sure you're shaking in your Nordic boots.

Mine are on the way. Please don't be to critical.

This is what I'm talking about. These flies are freaking ugly and I'm sure they catch fish. They're simple, buggy and I'm sure, deadly...great ties!
Regards,
Brian Ramsey
Top

"These flies are freaking ugly"

Drat, Drat, Drat and Double Drat. I wish I wasn't so heavily committed to other things that I could have participated in this swap. Great looking flies....or...uh...really ugly flies guys. I'll wager that they will draw trout out of their best lies for a snack.
"A man may smile and bid you hale yet curse you to the devil, but when a good dog wags his tail he is always on the level"
Top
Post Reply
26 posts