Ron Eagle Elk's favorite pattern on the Madison is the Wilted Spinach, created by John Bartlett, whose wife, according to the web, was cooking wilted spinach at the time he created the fly—hence the name. The original hackle was grouse or partridge, but Ron uses black hen. The key feature here is the two loops of flash at the tail.

Three years ago Old Hat created a post about this fly, but it was before I joined, and the photo is now missing. Here's what's left of that post:
http://www.flymphforum.com/viewtopic.ph ... nach#p7586
Carl, if you still have that photo, feel free to repost here. I'm really regretting that I don't have photos of REE's version of this fly, which are stunningly perfect and gorgeous, and simple.

Based on Ron's recommendation, I decided to try tying and fishing them.
The hooks are sizes 12 to 16, with probably one-too-many winds of hackle on some.
The dubbing is a mix of merino wool and seal, yellow and orange, mostly on a Clark loop.
Black hen, and a few with dark brown dun hen.
Three of the flies in the bottom row have a little extra loop of flash under the hackle to imitate the bubble.
Ron explained that this fly proves that fish can count, since one loop of flash, or three loops, won't work. The trout will only eat if they count two loops.

My wife and I hooked several trout with these, but only netted one of them. Dry flies seemed to be getting all the action while we were there.

Here's a link to a version I posted a couple of years ago on the FTF site. It can't hold a candle to REE's version, but it has caught a few fish for me:

http://www.flytyingforum.com/index.php? ... %2Bspinach
The dogs will bark, but the caravan marches on.
Top

Very nice pattern Lance. It is a great fly that I have fished for years. Actually one of the first wingless wet patterns I fished regularly. I met John Bartlett through the Westfly website.

Here is a link to the original pattern from John on the pattern list from Westfly.

Here is the one I use. 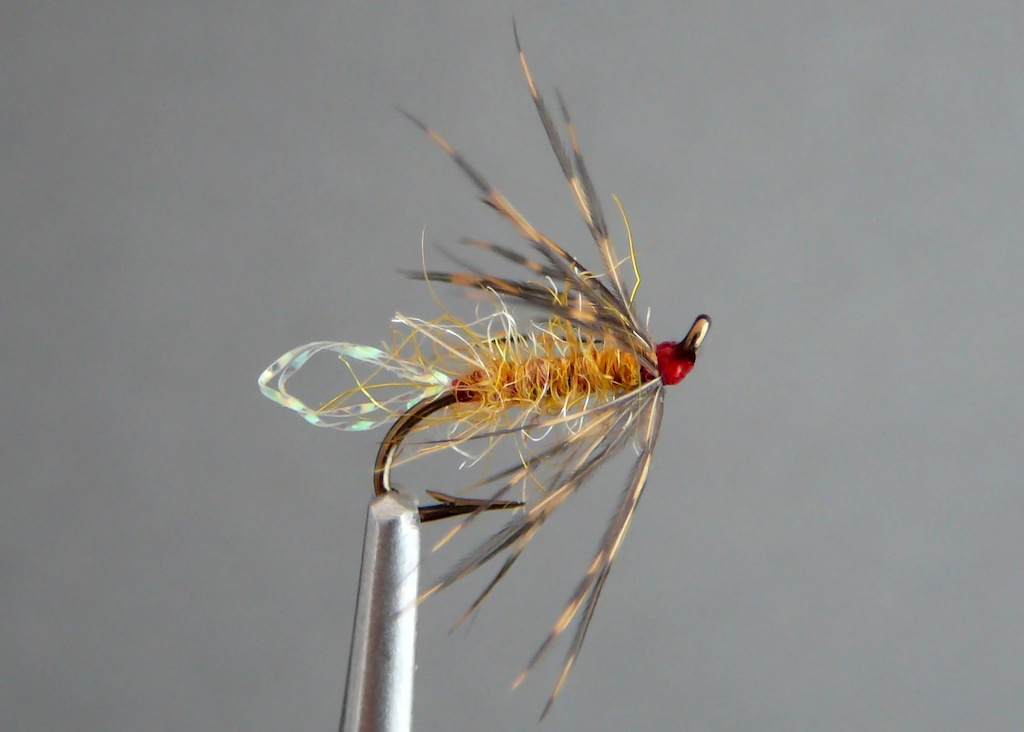 Last edited by Old Hat on Wed Jul 31, 2013 2:37 pm, edited 1 time in total.
I hate it when I think I'm buying organic vegetables, and when I get home I discover they are just regular donuts.
http://www.oldhatflytying.com
Top

Now there's one I haven't seen. Thanks Lance, John, Carl and Ron. I'll have to give this a try. The original has a huge red hot spot honker. Does anyone else include this in there pattern? I can see why the flash is effective with an already effective softy. Definitely another to try.

carl's pic was just added. Anyone else use the big red head? These local patterns are cool to see.
"A man should not try to eliminate his complexes, but rather come into accord with them. They are ultimately what directs his conduct in the world." Sigmund Freud.
www.WilliamsFavorite.com
Top

I have always used the red head. No particular reason other than that's what the original had. To be honest, I use this pattern more as a stillwater fly than a river pattern. I doesn't surprise me that this works well on the Madison. John Bartlett came up with this pattern while living in Montana.
Last edited by Old Hat on Wed Jul 31, 2013 2:43 pm, edited 1 time in total.
I hate it when I think I'm buying organic vegetables, and when I get home I discover they are just regular donuts.
http://www.oldhatflytying.com
Top

JohnP and Old Hat, thanks for the additional information on the authentic versions. I'm going to tie some of them and add them to my box.
And thanks to REE for reminding us of a regional favorite that may have wider potential.
Doug, shell we see what the bluegills have to say about it?
Top

The hot head(mine in orange) is part of my WS variant tie as well, also taken off Westfly years ago. This #14 out of my flymph box had an obvious hook set on a rock.

Thanks, guys. I get the obvious features. It's a cool pattern. Do most folks acknowledge the large hot spot head? Is it associated with a particular insect, time of year, time of day? just curious.
"A man should not try to eliminate his complexes, but rather come into accord with them. They are ultimately what directs his conduct in the world." Sigmund Freud.
www.WilliamsFavorite.com
Top

William,
I don't fish it as any particular insect but more as a general attractor pattern at any time of year or day. It makes an excellent searching pattern when nothing else seems to be working and no hatch is happening. To me it is a life cycle just before a Sparkle Dun or an X-Caddis.

If I didn't already have a good simple Soft Hackle October Caddis I would tie it in that size.
Top
Post Reply
72 posts