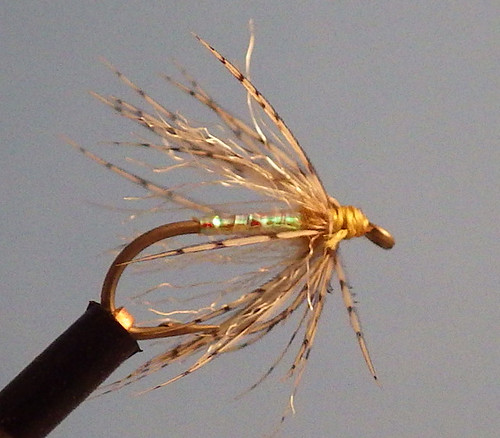 I am sorry it didn't get a full test on the Firehole during the next two days of fishing. But it did get to count coup on some fish by a few of the Brotherhood gathered around the table that night. Craig Matthews even gave it an imprimatur the next morning saying "that fly will fish" while we discussed the White Miller at Blue Ribbon Flies. Craig was kind enough to give me a tying lesson on this caddis I had never heard of 5 years ago in his shop.

Interesting, I know Ray had a good outing with a fly similar to that.
Top

Here is an older post with another similar flashy fly that has worked well for me.
http://www.flymphforum.com/viewtopic.ph ... htning+bug
Top

I see a lot of patterns that en corporate holo, flash etc into the recipe when imitating PMD's and caddis.

Probably a good reason for that! Thanks Bill.
Top

Bill, I may have said privately, but I really appreciate the fly you left for me on my station. Such a pleasure to watch you tie and your generosity was as evident in person as I have known online for years. I tied and fished a fly very, very similar to yours shown here, although I saved yours. I did well with it and I believe Ray had some sport with the one I gave him even after I was flying home. I haven't fished these soft-hackles with halo tinsel bodies before, but they will certainly have a place in my box with the flymphs and spiders. A day on the Gunpowder I fished this pattern with a P&O dropped below and they only wanted the P&O. A week later, same scene and all eight of the classic Gunpowder 8-9" brownies hammered the flashy body, wouldn't touch the P&O. I like your IBF White Miller SH very much. Why it took me so long to try it out, I don't know, but I'm happy to have something else in the queue.

This version is similar with a shorter starling hackle and an ISO blend thorax, but not dissimilar from the pattern I tied up and gave to a few people. Imagine this, with the poorly sized halo (its what I had) and a longer, pale ginger hackle and greenish yellowish thorax).

This Halo Dark I have not fished yet. The Halo Light...killed on a couple outings. I really like the specific tailoring of your pattern to make this a White Miller imitation.
"A man should not try to eliminate his complexes, but rather come into accord with them. They are ultimately what directs his conduct in the world." Sigmund Freud.
www.WilliamsFavorite.com
Top

The fly you described probably was working well with the PMDs that were hot on some of the waters. My glass bead emerger wasn't working for me as well as the one Eric Pepper posted. I will have to add your combination to my new expanded PMD box I dedicated on my return home. More tying to do.