Here are the hook photos John sent over to me earlier this week. 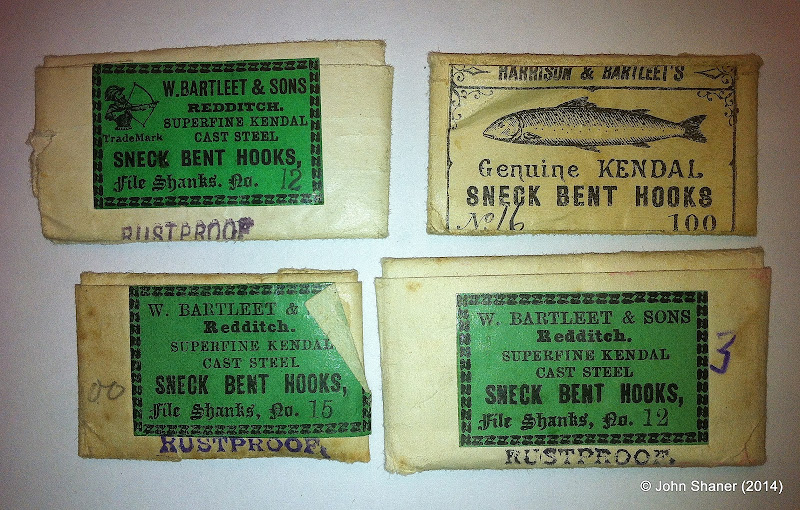 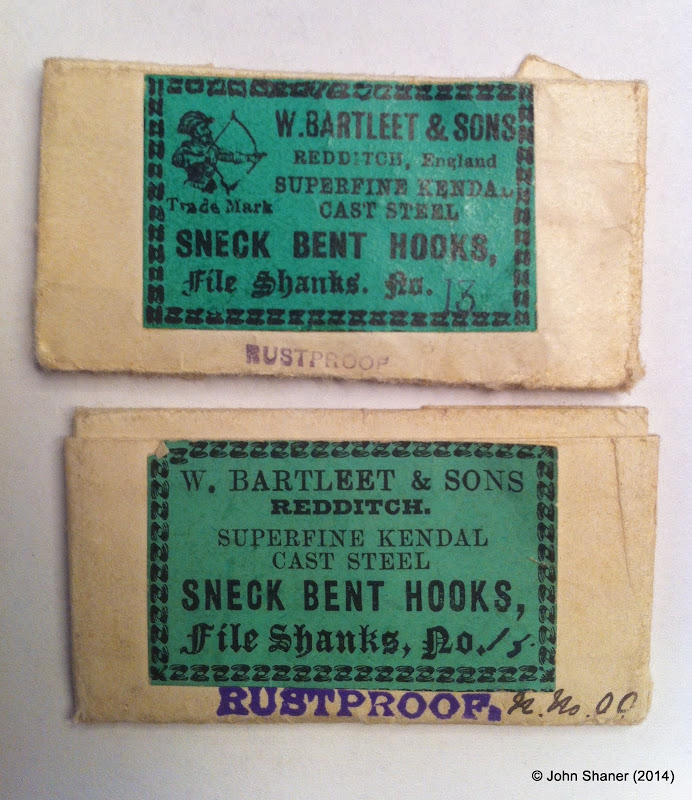 Greenwell wrote:The hooks are Harrison and Bartleet or W. Bartleet & Sons "Kendall Sneck Bent". The offset was a very common feature of fly hooks, especially English hooks, until quite recently. Most smaller fly hooks were either "Kirbed", bent to the left, or "Reversed", bent to the right. Sneck refers to the square bend, a common hook style at the time these flies were tied.

And here is another spider, which looked particularly buggy. 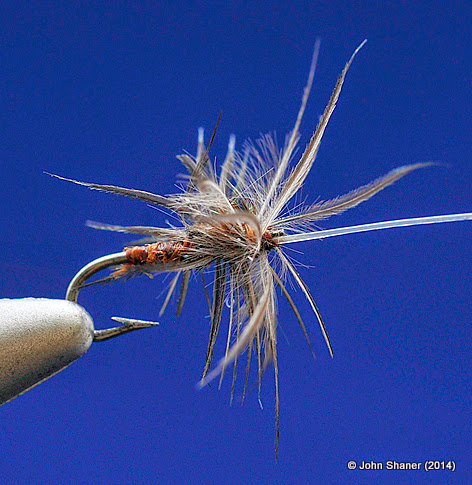 The old hook packages certainly are interesting. All are full of hooks, which even though they are well over 100 years old, are as good as the day they left the factory. I'll see if I can get a decent photo of them sometime.

If the disheveled little fly could talk I'd bet it would have some stories to tell. It certainly looks as if it was in the mouth of more than a few trout and it must have been one of those special flies that every angler sometimes puts away carefully in the his fly book; an old friend who's earned an honorable retirement. How many times was that point touched up to give the hook that look? It sure was dressed to endure and except for the horse-hair snell one might be tempted to give it a swim down a favorite pool. It's a really buggy tie and one that would appeal to the trout.

Pattern-wise it has all the attributes of Stewart's "Black Spider" with it's starling hackle and brown silk. And it certainly bears out Stewart's observation that the fly would become more effective after the fish had chewed on it a bit. In a lot of ways, this is an even more interesting artifact than the unused flies we've seen on this thread, a testament to a good pattern and a skilled tier.
Top

Ray and John,
Excellent thread! The hooks are quite interesting and so was the statement about the hook quality! Are the hooks that we are using today going to stand up to the test of time as these have? Maybe we should squirrel away a couple boxes of what we have now (A time capsule!) and have someone check them out!
Speaking of a time capsule, at the next rendezvous have everyone bring a bunch of flies (sealed tightly in those really cool fly boxes with the air tight seals around the perimeter), a box of favored hooks, some flymph materials of all sorts, notes, books, personal reflections, tons of photographs and/or memory cards, and of course, a decent quality time capsule! What do you think?
The fly posted is astonishing! John, I have but one question. Were not W.C. Stewarts spiders mostly a hackle only pattern with the hackle wound over the first 1/3 or 1/2 of the hook shank and a very thin underbody of tying silk just under the hackle itself? This pattern seems to have a body purposefully extending a ways toward the hook bend. Could the hackle have orig. covered the exposed body and possibly been chewed off or somehow lessened to the point it is now? It is a fascinating fly to behold and I want to thank you a whole bunch for sharing it with us! Please keep them coming as you have time to post them! This entire thread is just awesome! I cannot get enough of knowing where this all started, the early history of these patterns!
Doug in the Den
Fish when you can, not when you should! Anything short of this is just a disaster.
Top

I must say I am thoroughly enjoying this ongoing thread and reading your insightful posts.

Doug the idea of a time capsule is grand.
I hate it when I think I'm buying organic vegetables, and when I get home I discover they are just regular donuts.
http://www.oldhatflytying.com
Top

I was recently contacted by Rob Smith, who is in the process of putting the finishing touches on his new book ("The North Country Fly – Yorkshire Soft-hackled Tradition”, to be published in 2015). Rob provided additional information to supplement John's contributions so far.

"As my laptop screen is not calibrated it is hard say definitively what the chosen silk colour is. However, the photos posted look to be from Sylvester Lister manuscript of dressings. It is impossible to ascertain whether Henry Walbran Cooper or Sylvester Lister dressed these particular flies, though it has often been stated that Lister dressed a scruffy fly. Lister became partly paralysed in one arm due to a farming accident, and later taught himself to fish and fly-dress using the other arm. Both Cooper and Lister certainly knew each other as they were both connected with the Burnsall club, Lister as one of the founders and Cooper as a committee member of over 20 years.

The Dark Bloa is a very old pattern and came be found in the Pickard manuscript of the late 1700s. Pre Swarbrick. The technique of trimming fly hackles is pretty universal in regards to the North Country patterns. It is a technique that is used by various fly-dressers and is merely a way of utilising large hackles when they have run out of suitable sized hackles. There is a way of dressing spiders with over long hackles without the need for trimming, but it is a technique that is almost impossible to master when tying flies in your hands without the aid of a vice. As John says, it is a matter of the tyer's aiming for size consistency.

There is no family connection between Max and Henry Walbran Cooper though they certainly knew each other and were both members of the same angling clubs.

The second photo appears again to be from Sylvester Lister’s manuscript. There is no wire reinforcing of the head, what you are seeing here is the refection from the herl stalk. A point to remember about most North Country dressings, is that they were often in a sense dressed backwards. So on these patterns the herl head is dressed in first, then the hackle and then finished with the body. This prescribed method is easier to do in the hand that the todays method of working to the front.

Photo three again appears to be from Sylvester Lister. The clue seems to be in the hackle which is quite a noticeable light blueish grey, which rules out Coot, Waterhen and Jackdaw.

The Dark Watchet is of course an ancient pattern and can be seen with numerous watchet patterns in Yorkshire manuscripts dating as far back as the 1600s. Including one called the Bloa Watchet!

In regards to John’s photos; the first fly appears to be Whitaker’s dressing of the Little Brown

This pattern is found in several North Country lists but so far I have only been able to find this dressing with a dubbed body. James Whitaker was known to both Walbran Cooper and Sylvester Lister. Whitaker was Lister’s overseer at Bolton Abbey and river-keeper on the Bolton Abbey Estate. Whitaker and his brother were also founders of the Burnsall Club Angling Club along with Sylvester Lister. Whitaker’s list is found in a few Max Walbran catalogues, he was also a fishing guide and fly-dresser. Wrens tail looks like a cross between partridge back and snipe rump. Wren hackle barbs are longer and thinner than partridge and the barb count slightly higher, so it is generally dressed quite sparse even by North Country standards. It will have chestnut reddish tints, depending on how faded the hackle is.

And here is the next fly from John's collection: 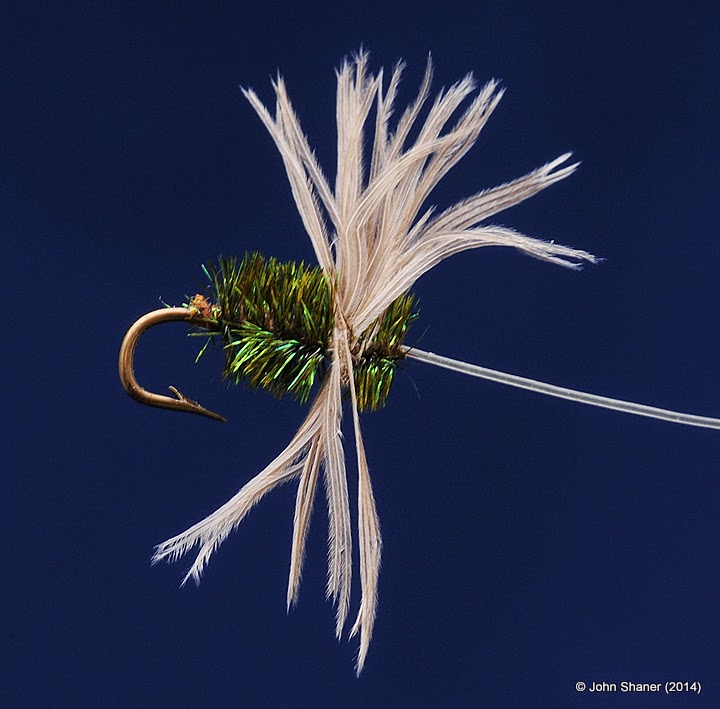 I can tell you that my jaw dropped open (

) when I saw the herl body on this fly. Can you believe how perfect this fly is? Absolutely incredible!

Rob Smith sure is a wealth of information! I doubt that anyone knows, or has ever known, more about the North Country Spider and it's heritage than Rob. I've been corresponding with him for quite some time and the depth of his knowledge is astounding. He's also a really nice guy! His book is due out soon and I can't wait to get my hands on a copy. It's going to be the definitive work on the subject.

The information above comes from a series of emails between Rob, Ray, and myself discussing the patterns posted on this thread. In every point Rob ended up being correct and his insistence on accuracy forced me to look closer, both literally and figuratively, at the patterns shown. A learning experience to be sure!

The beautiful little peacock bodied fly is, I believe, a Smoke Fly. The pattern appears in Pritt but goes back to at least 1875 and is probably much older. The pattern is hackled with the "feather from a young grouse". I have a labeled envelope from the HWC collection marked "Grouse Poult" and they are a dead ringer for the feather on this fly. Pritt says "It is sometimes dressed with a twist of silver round the body." I just looked at the fly in the photo under magnification and there is what looks to be a gold tinsel tag. It could be tarnished silver but I don't think so. (See Rob, I'm learning to look really close!)

The skill shown by whoever dressed this particular fly is outstanding, especially when one looks at the actual specimen and realizes it is on a size 00 (16) hook. I checked this using the Redditch hook scale on an original "Sterling Angler's Scale" card. (On the hook scale in Taverner's "Fly Tying for Trout" it measured to a 00 also, but Taverner calls this a size 17. On both scales the hook measures 1/4") For perspective, a modern size 18 TMC 100 measured out to size 14 on the Sterling Scale!
Top

Must be late Ray.......To answer your question, I did steam this particular fly a bit, but otherwise it's in "as found" condition and just a fine and bright as if, like you said, it was tied five minutes ago. Also, it looks like it was dressed with orange silk. It's pattern no. 56 in Pritt's list but he doesn't seem to think much of it.
Top

To John and Ray,
This thread continues to be fascinating to me not only from the pictorial stand point but also from the historical! I simply cannot get enough of this! And, we have another great book to look forward to (along with Lances!) from Rob Smith! Excellent fellows. This kinda news is what makes this sport so exciting!
Keyed up,
Doug
Fish when you can, not when you should! Anything short of this is just a disaster.
Top

John, this Smoke Fly is just exceptional. Amazing the lineage of the fly, but this specimen in particular is just incredible to see. What a pleasure to see these old patterns, rather than an interpretation or updated variation. I have a few of these old hooks and they are so little.

Would you be able, as briefly as you care, to share a little about the tying sequence of this. I may be able to manage a comparable end product, but I have to scratch my head for a bit to figure out how he did this one. It looks to me like he strapped the gut to the shank, tied in the head (so nice) and wrapped it, tied in the hackle wrapped it, tied in the body and rib and brought it to the bend and tied off. Is that close?

I never get tired of seeing these.