I think you have the tying sequence exactly right! Under magnification it looks as if there is just a turn of gold tinsel for a tag. The peacock is matched perfectly as to length, a really beautiful fly.
Top

Thanks, John. I really like getting to see this one. I had a tough time finding an actual Smoke Fly as a natural. Is this an attractor pattern or is there actually a UK bug that matches the pattern? Could just be...peacock = magic... and I couldn't argue with that but the name suggests something more. I haven't gone to the source material to find a suggestion. I will try to do that when I get back.

Thanks again for the insight.

I'm curious about the gut. John, do you think that the way the gut is tied on the hook (far side, top, bottom) effects the way the fly fishes? Maybe with currents and such?
Top

I've seen some tied on top and some on the bottom of the hook. There may be some slippage during the process of "whipping" the gut to the hook and that what may be happened in the case of this fly.

John Jackson in "The Practical Fly Fisher" recommended tieing the gut in on top of the hook. I know this because I just re-read his tying instructions last week. Others may have recommended differently but I'm traveling this week and away from my books so I can't give examples.
Top

As they used to say on Monte Python...

"And now, for something completely different." 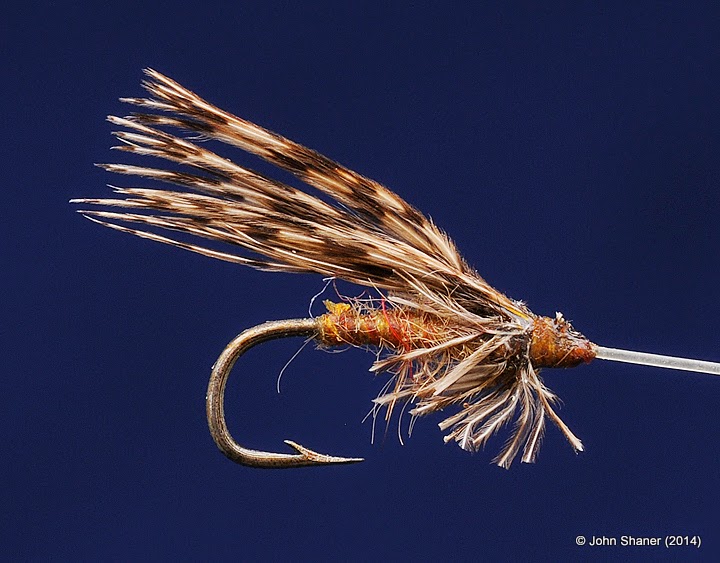 I found the construction of this fly to be fascinating.

John, can you tell us the name of this fly, and more about how it is tyed. I am guessing that the wing and legs on this fly are initially formed as a wrapped hackle, then tyed down and trimmed in this fashion. I love to hear more about how it was tyed and how this one would be fished. To my layman's eye, this looks like a sedge (caddis) pattern. Would this fly have been fished wet, or treated a and fished as a dry fly?
Ray (letumgo)----<°))))))><
http://www.flytyingforum.com/index.php? ... er=letumgo

Looks to have a bit of wax on it.

Very cool. March Brown maybe?
I hate it when I think I'm buying organic vegetables, and when I get home I discover they are just regular donuts.
http://www.oldhatflytying.com
Top

I think I might fish it for a caddis...

Roadkill wrote:I think I might fish it for a caddis...

...in October.
Some of the same morons who throw their trash around in National parks also vote. That alone would explain the state of American politics. ~ John Gierach, "Still Life with Brook Trout"
Top

Old Hat wrote:Looks to have a bit of wax on it.

Rob Smith tells me it is a " Hackled Duel Cruik".

In Geoffrey Bucknall's "The Bright Stream of Memory" he gives a pattern for a "Devil Crook".