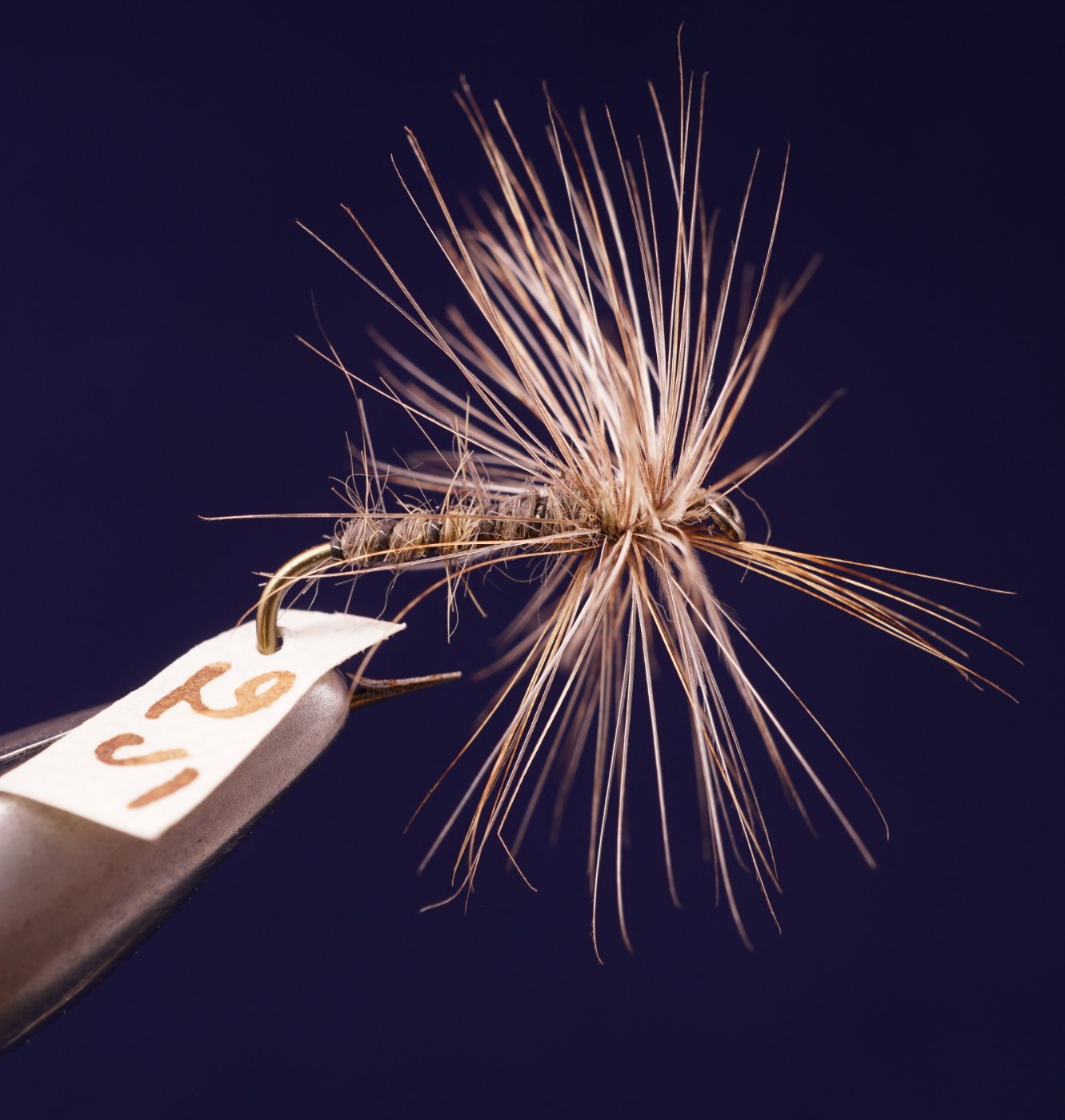 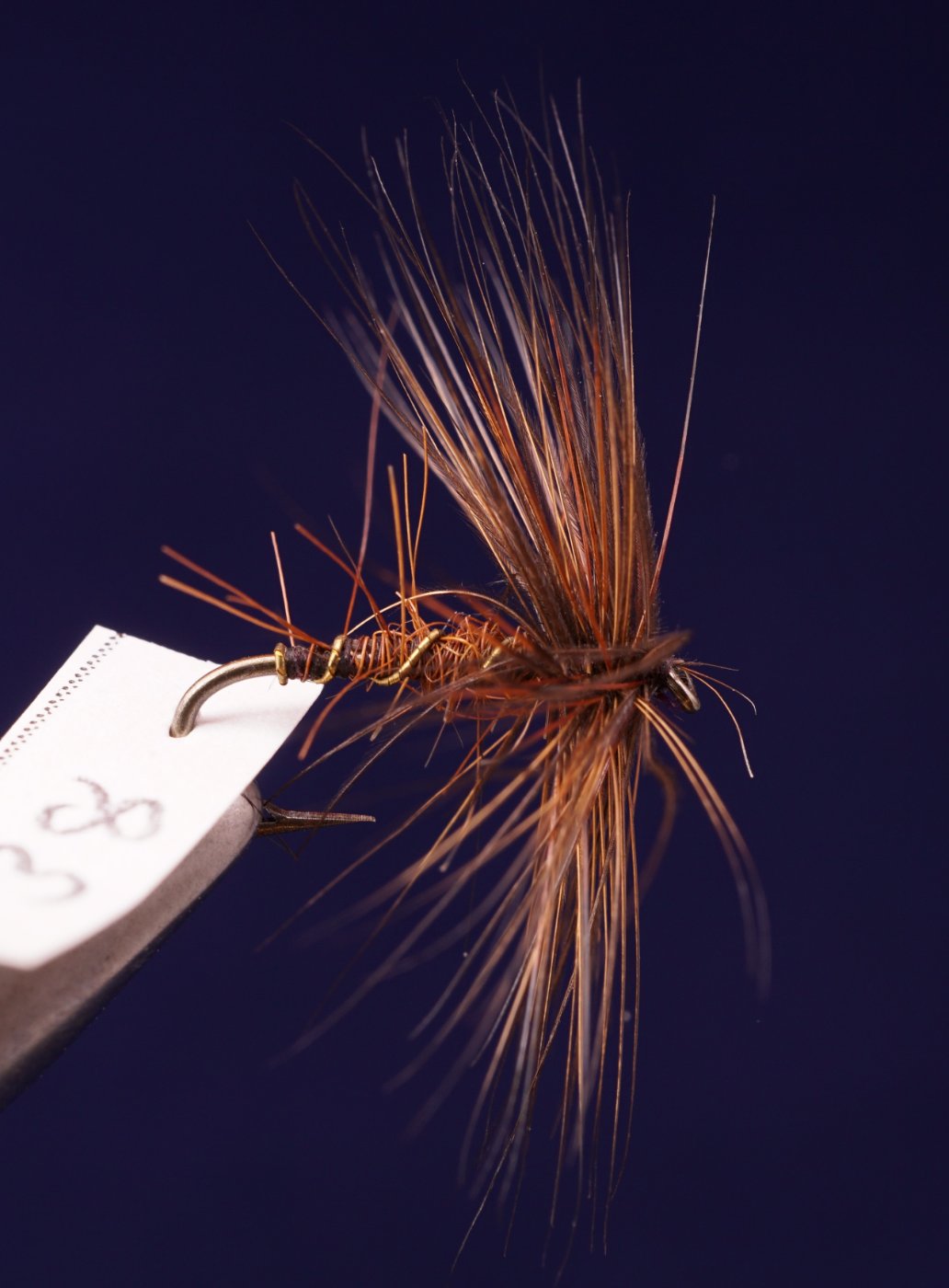 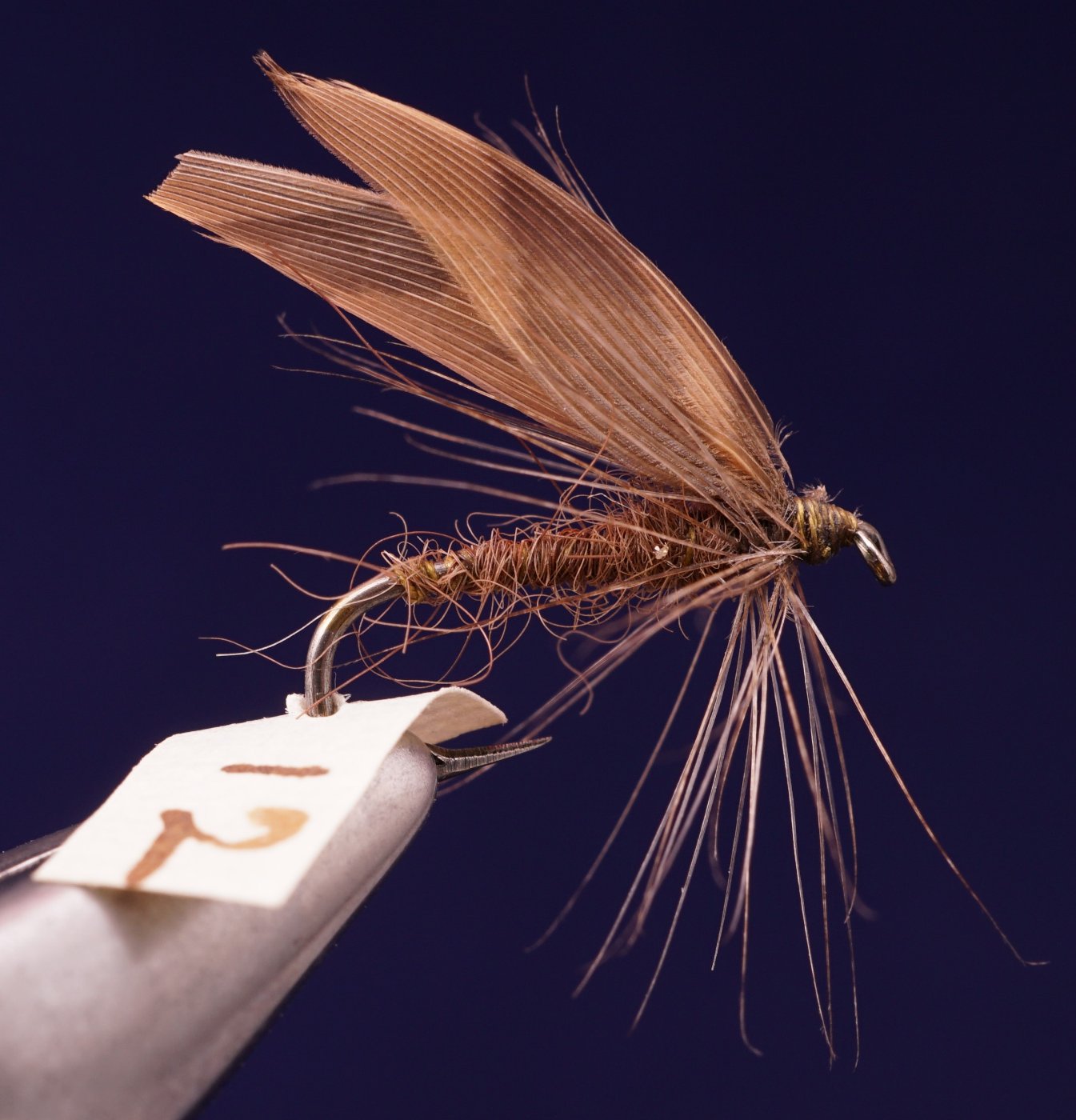 Here are some shots of examples of H.C. Cutcliffe's flies from his book The Art of Trout Fishing in Rapid Streams, 1864.
The flies were tied by Roger Woolley and are contained in one of his characteristic white card boxes. The box shows his earlier label stating "Angler and Fly Dresser" (singular) and not the later "Anglers and Fly Dressers" (plural) after he had brought his daughters into the business. This leads me to believe that Woolly himself dressed the flies but this is a bit of speculation. The details written in pencil on the box are somewhat ambiguous in their meaning and appear to be from a different hand than Woolley's.

I do feel that the flies are accurate representations of Cutcliffe's dressing style and fly proportions. The long, often dense poultry hackle is characteristic of the West Country style and differs significantly from the soft game bird hackled Yorkshire and North Country patterns. Whether Woolley had original Cuttcliffe patterns to go by must remain a mystery but as he was one of the most knowledgeable fly dressers of his day he certainly would have had a very good idea as to how the flies should look. Also, from looking at the flies under magnification, I am sure that Woolley went to pains to make sure the materials in these flies were as accurate as possible, especially the use of Hares Flax, the guard hairs from the back of a hare, a material that Cutcliffe was very fond of and describes at length in his book.

In total there are 33 flies in the collection. The flies at one time must have all worn tiny paper tags numbered in Wolley's distinctive hand and sepia ink and the tag numbers correspond to the pattern numbers in Cutcliffe's book (Cutcliffe did not use pattern names). 23 of the flies still had the tags attached. 10 of the flies had missing tags and I was able to determine with some degree of confidence 5 of these patterns and attached tags with the numbers written in pencil. The final 5 patterns I wasn't able to ascribe to particular patterns and I left these un-tagged. Of the 38 patterns described in Cutcliffe's book, there are 5 flies missing.

I photographed the entire collection for Paul Gaskell, whom I met last month in England and who is writing a book about Cutcliffe, due out soon. Paul is a very impressive angler and a very nice man and I was happy to help him with his project. I will keep you updated on his book as more information becomes available, and I'm sure that Forum members will be interested to see the finished product.

I hope you enjoy these very distinctive and historic West Country flies! 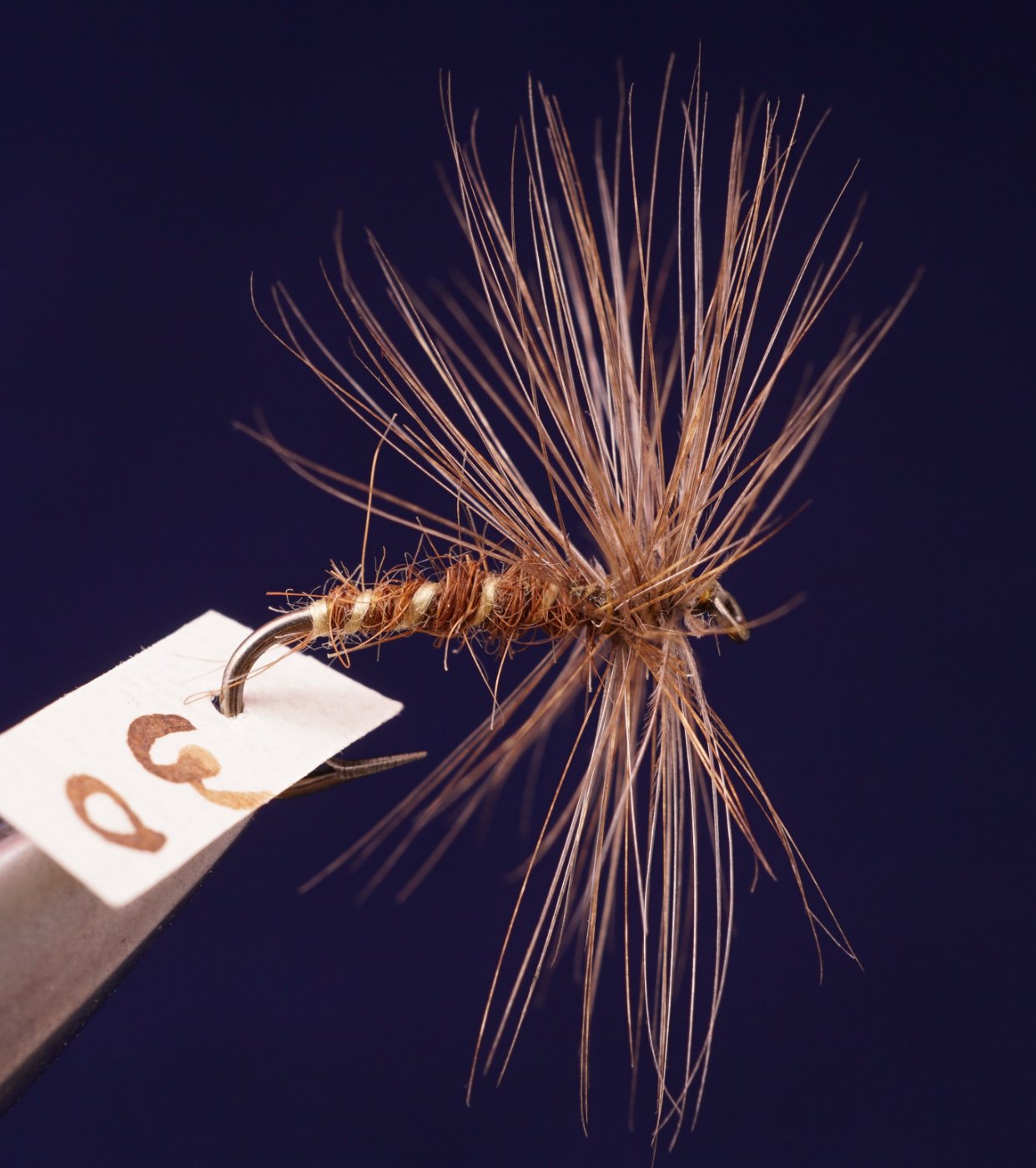 Awesome! Please keep adding more. Plus, how about your trip?

Thank you very much, John. I, for one, would be very interested in a book about H.C. Cutcliffe - please do keep us posted.
Cheers
Top

I have always been interested in what Cutcliffe's flies looked like. Very nice to see these photos. I haven't read his book but look forward to the upcoming one. Cutcliffe's philosophy must have differed quite clearly from the Yorkshire school. Probably his streams did too.

I remember when Malcolm Greenhalg visited the River Gim in Sweden he had to change his ways of fishing his spiders due to the force of the water by fishing them downstream. He adapted to circumstances. Suppose Cutcliffe did the same?

Thanks for sharing these John. Very cool to see these denser stiffer hackled patterns from that era.
I hate it when I think I'm buying organic vegetables, and when I get home I discover they are just regular donuts.
http://www.oldhatflytying.com
Top

John, wonderful, informative post. I always admire the flies tied by the old masters of the art. Thanks for the beautiful photographs of these marvelous flies.
"A man may smile and bid you hale yet curse you to the devil, but when a good dog wags his tail he is always on the level"
Top

Notice the long, heavy hackles, nothing like many tie nowadays. Wonder who started the slim, one turn lightly hackled flies?
Top

It is a delight to see finally see some of the West Country flies.
Top

There you have his book as PDF (you can choose other formats if you wish to). I hate reading books from a screen. If my memory is to trust, Cutcliffe used rooster hackles in order to avoid them to collapse against the shank. His flies were not soft hackled ones. He relied on other principles. I'm sure John Greenwell can tell us more about it if he finds the time to do it. As I said previously, I haven't read this book (since I haven't found a reasonably priced copy). I don't like reprints either. I'm a snob. I want to hold history in my hands and to be a link in a chain of readers.