So I’m watching Robert Smith’s YouTube videos on tying Pritt’s Fieldfare Bloa and Water Cricket dressings as he describes (and pictures) some Golden Plover Breast Feathers and I think to myself “Wait a minute. I have a full Cookshill Golden Plover skin that Steve Cooper sent me awhile back.”

So, I grab the Cookshill Golden Plover skin, still in its original large plastic bag, and go looking for those light colored GP Breast Feathers. I don’t see any Golden Plover feathers like Rob Smith uses on the Fieldfare Bloa and Water Cricket! ”Hmmm, where could they be? Then I realize that the tips of the wings are stapled to the white board backing.

I remove the staple from the right wing and look under it. WOW, there’s a treasure trove of lovely, grayish / whitish golden tipped feathers hiding under that wing! This OLD guy is now in 7th Heaven.

Ok, back to the vise to soon start tying some Water Crickets…...Now, just to find an alternative to the Fieldfare feather!
Top

Answering my own post... tied up a dozen or so of Pritt's Water Crickets after watching Robert Smith's YouTube video and those Golden Plover Breast Feathers are some of the nicest looking game hackles I've ever used and the way they sweep back is great! Gotta get a few more in the future.

Bob and Robert - Thank you for pointing us to these useful feathers.

Can you post a photo of the flies you tyed? I’d love to see them.

Will be out of town for awhile. Will post pics when I get back.

joaniebo wrote: ↑
Wed Sep 09, 2020 5:19 pm
those Golden Plover Breast Feathers are some of the nicest looking game hackles I've ever used and the way they sweep back is great! Gotta get a few more in the future.

I've been on the Cookshill waiting list and I think it's up to 40.
Steve thinks he will be dead by the time that happens.
Put your grand-kids on the list and just maybe, one of them will get lucky.
Top

As promised, here's a pic the Water Crickets I tied last week. 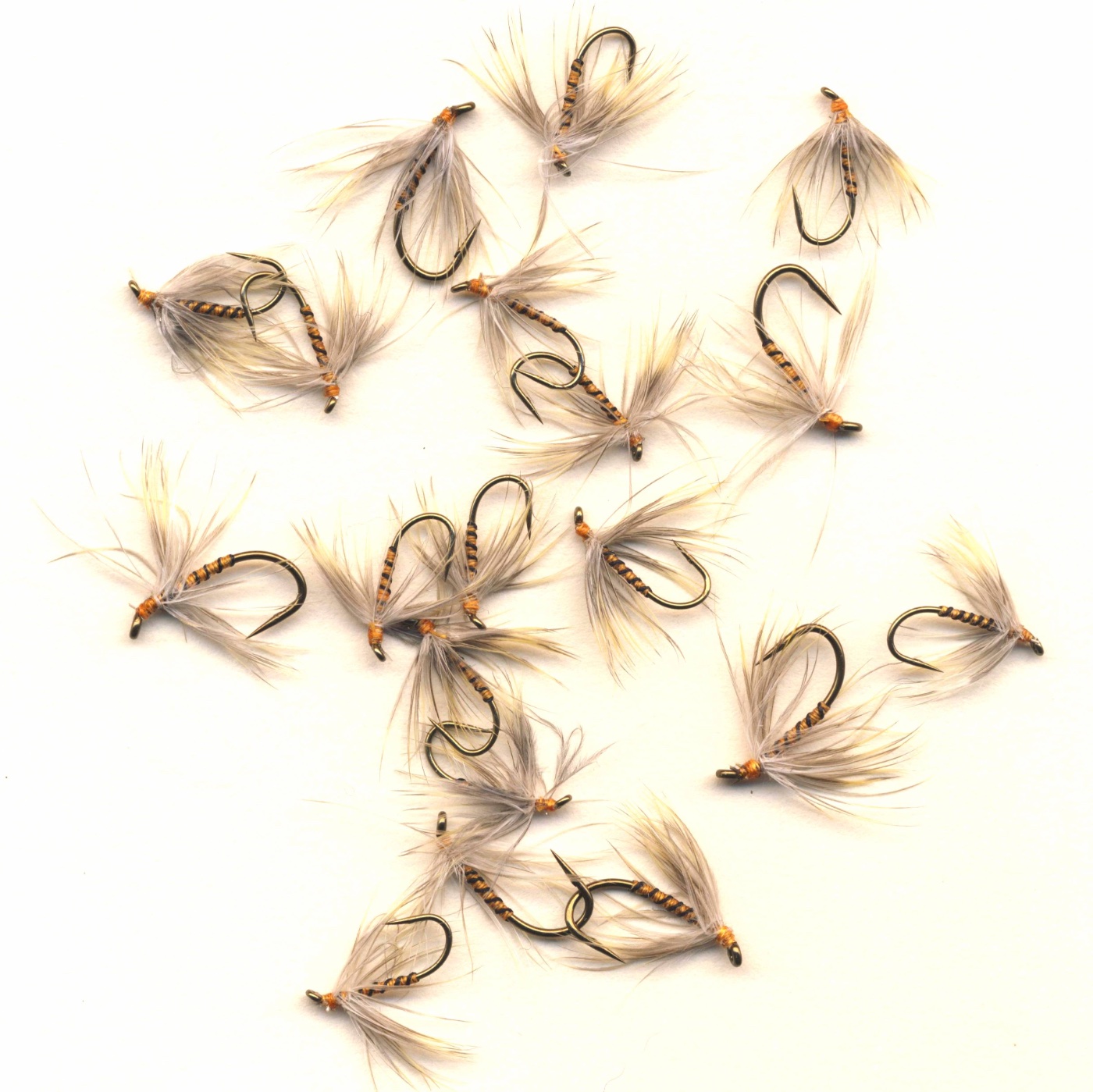 Worth the wait. Gorgeous flies.

Very nice work, Bob. I noticed you vary your hook weights - this is an important technique which is rarely discussed. When a flymph in the film is the order of the day, I use either Partridge L3A or Daiichi 1480. For just below the surface, any medium wire Limerick bend, such as the Mustad 1921/1928/9002 is the ticket. Mid-water mandates a heavy wire hook such as the Daiichi 1760, or Mustad 7957BX. Also, the Mustad 3906B is a great "between" hook. Yes, weight may be added to the hook, but too heavy is not good either. Your fly must be where the fish are feeding!
Here is a good example:
A few years back, we were fishing Horse Brook Run on the Beaverkill. Situated between two of the most famous pools( Hendricksons and Cairns), HBR has three components: the top outflow run from Hendricksons, the middle pool where Horse Brook enters, and the lower riffle that takes you to Cairns. Unbeknown to most in the upper stretch are the three deep holes tight against the road, which always hold a few good fish. William, Carl and I fished there one fine October day - we crossed where the brook enters, walked upstream, the proceeded to fish down. Carl, then William, with me bringing up the rear. in the lower hole, neither Willian nor Carl had a pull; I managed a fat rainbow on a flymph tied on a Tiemco 2x heavy hook. My point is, the heavier fly caught the fish, because that is where they were feeding.

Those were two good videos, and the second one has left me with a question.

When he goes around the body with the black silk, he goes the way he was tying the orange silk, and his explanation made sense to me. But why then when we tie a nymph with wire over a, let say a peacock herl body, why do we wrap the wire the opposite way? I have always heard wrapping the ribbing the opposite direction helps to hold in the body material better, and in this second video Mr. Smith says his way works better.
Top
Post Reply
9 posts • Page 1 of 1