While I was scouting around on the internet looking for interesting patterns for the Lost NZ Flies swap, I learned that there is a medium sized mayfly of the family Leptophlebidae that is relatively common in cold, clean NZ streams and provides a significant portion of what trout eat in those waters. It is called “Deleatidium” and has two or three subspecies that provide working hatches during the year. It resembles, to my way of thinking, our isonychia (slate drake) mayflies, with longish tails and a streamlined greyish body. The wings are also grey, but unlike the monochromatic slate grey of the isonychia, the wings are variegated with black markings.

I had flymphs on my mind as a result of Carl’s suggestion for holding a flymph raffle to raise funds for IBF pins, and thought I might try to come up with a deleatidium flymph. So, I mixed up a batch of dubbing consisting of 70% kit muskrat/30% hare’s ear and spun some bodies on Pearsall’s #10 ash gossamer silk. Then I took a now-vintage Mustad 94842 Size #12 up-eye hook, tied in two hackles by their butts (one grey and one badger with one side stripped on each) using claret gossamer thread. I wrapped a tag of small gold flat tinsel, added three bronze mallard flank fibers for tails, tied in the tinsel again for a rib, added and wrapped one of the spun bodies, palmered up the rib, brought the hackles back together in three wraps, caught them with the thread, took two turns of thread through the hackle, and finished off with the signature cone head.

Here is the result (after three attempts): 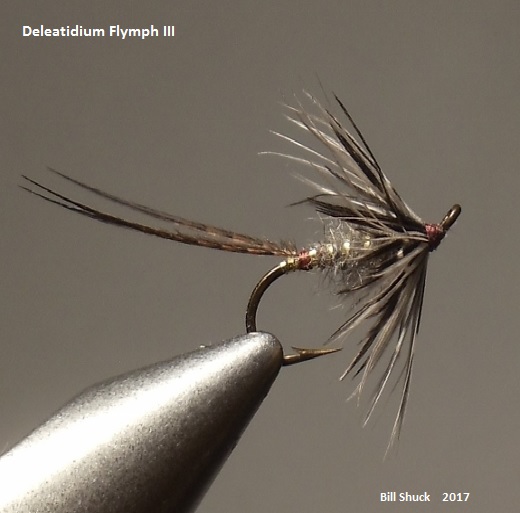 Mr. Bill, beautiful fly. The write up is also appreciated. Kinda fun to read the reasoning and
thought processes and the tying instructions behind the final offering.
Thanks for the nice wake up.

Beautiful tie; what kind of hackle is that?

ScottP wrote:Beautiful tie; what kind of hackle is that?

Both are hen cape, Scott.
Some of the same morons who throw their trash around in National parks also vote. That alone would explain the state of American politics. ~ John Gierach, "Still Life with Brook Trout"
Top

Bill, that's a beauty. I like to think if I saw this in isolation I could have recognized it as a Shuck flymph. All the refined markers are there. Beautifully done. Obviously not a natural I'm familiar with and I imagine from your description this is a fair match. I'd be curious to hear from the locals how this fly hatches. I'm always looking for all the various ways flymphs might be presented to dial in on a hatch.

Great to see this one.

W
"A man should not try to eliminate his complexes, but rather come into accord with them. They are ultimately what directs his conduct in the world." Sigmund Freud.
www.WilliamsFavorite.com
Top

Bill that is a lovely new creation!

Nice! Very close to another which is Zeplophlebia. If you can get it down to 14 - 16 it'd be perfect!!!
Top

Bill, that is subtle and beautiful for so many reasons.
The double stripped hackle technique is a new one to me.
Top

Thank you to all for the positive comments.
Some of the same morons who throw their trash around in National parks also vote. That alone would explain the state of American politics. ~ John Gierach, "Still Life with Brook Trout"
Top

gingerdun wrote:Bill, that is subtle and beautiful for so many reasons.
The double stripped hackle technique is a new one to me.

Not something I'd have considered on a soft hackle/flymph due to the complexity of getting the job done.
I'm presently struggling with 2 hackles on a #8 rabbit lure!
Great skills Bill.
I think it's high time you took that fly fishing.
How hard can it be?
Top
Post Reply
13 posts