A waterhen bloa works really well for me during a Hendrickson hatch. If there are duns on the water, I'll fish it with a Hendrickson dry. Doubles are common. If the duns haven't appeared yet on a given day, I'll team it with a Dark Hendrickson wet.

During the spinner fall, a Partridge and Orange beneath a Red Quill dry is hard to beat.
Bob
Top 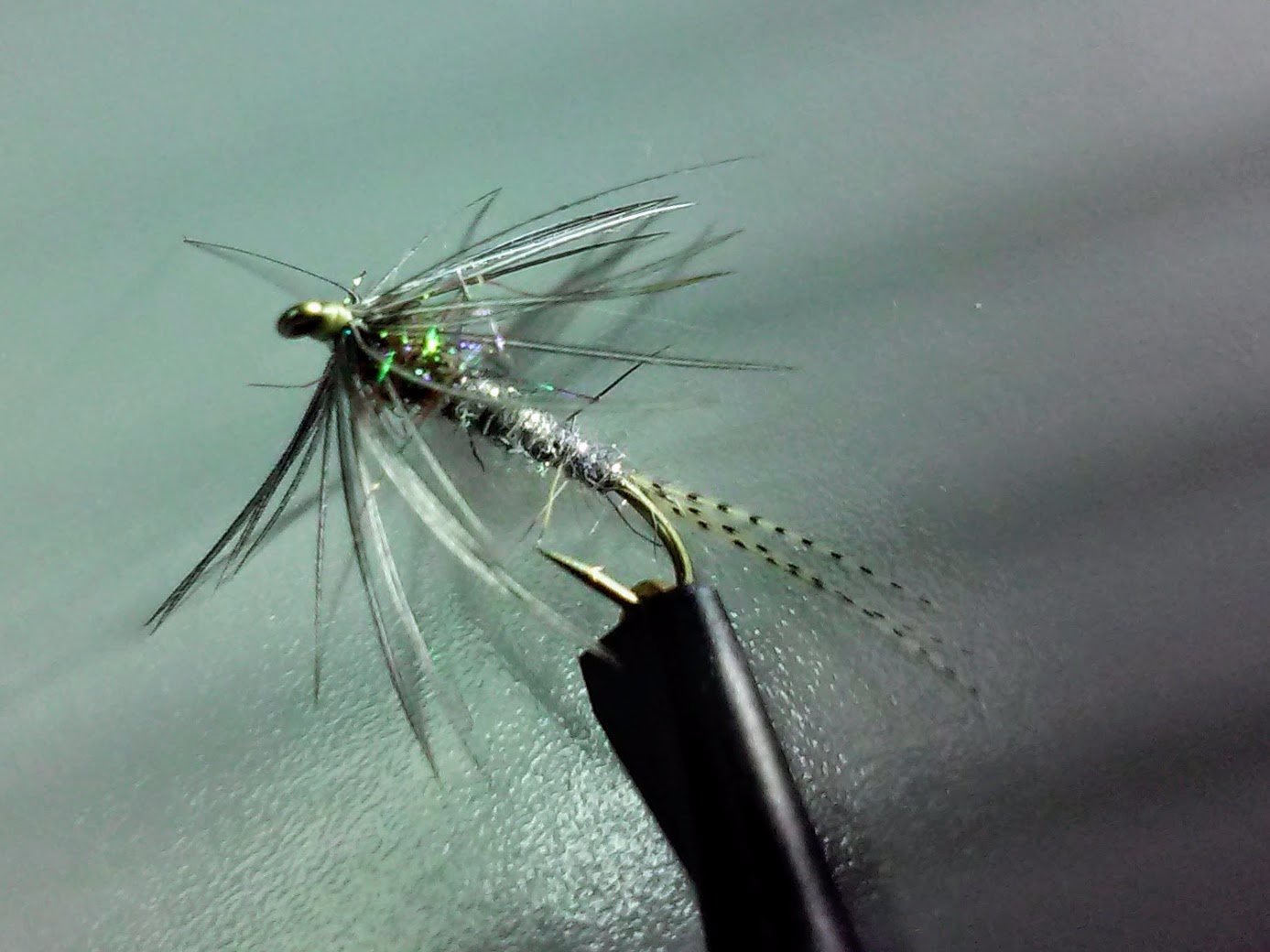 This is the Hendrickson soft Hackle I have used for the last couple of years. I am very happy with it.

Thanks for the additional photo, footage and info John, very cool...
I think how you are intending to fish your flies will work well but I would also consider creating some that sit higher but are still soft hackles. You may fish emergers and haystacks when they're willing to look up. I have a at times caught more fish on adapted soft hackles that employ hackle fibre tails some seals fur dub and maybe a turn or two of undersized cock hackle. These flies have worked extremely well for me on some very tough fish, they usually sit in or just under the surface. I sometimes like to cast well ahead of a fish give the fly a short sharp strip to sink it and trap airbubbles and hopefully the rest goes to plan, and it often does...
I'm not a Flymph/softhackle/wet fly purist btw, my fav way to fish is with emergers and dries, I have on aoccasion thought about becoming a purist, maybe some day...
Top

John, your Hendrickson soft-hackles are gorgeous. I really like the dubbing silk combo. I have always loved tying flies that match Hendricksons and it's one of my favorite hatches. I've only caught the hatch on Central Pa streams and haven't seen the flies emerge in the Catskills when I was there. From all accounts the flies are very similar to what you are showing as your local Hendricksons. In my experience there are lots of soft-hackle flies and patterns in different shades that work. Seems like when the fish are hitting, they are generous and if they aren't fussing with the pattern hasn't solved it for me. That being said, I always carry a row of #14 soft hackles like the one below with a twisted body of pheasant tail and 6a silk. The effect is really more a match to the nymphs, especially with this marked hackle. I like this fly for lots of situations to be honest. 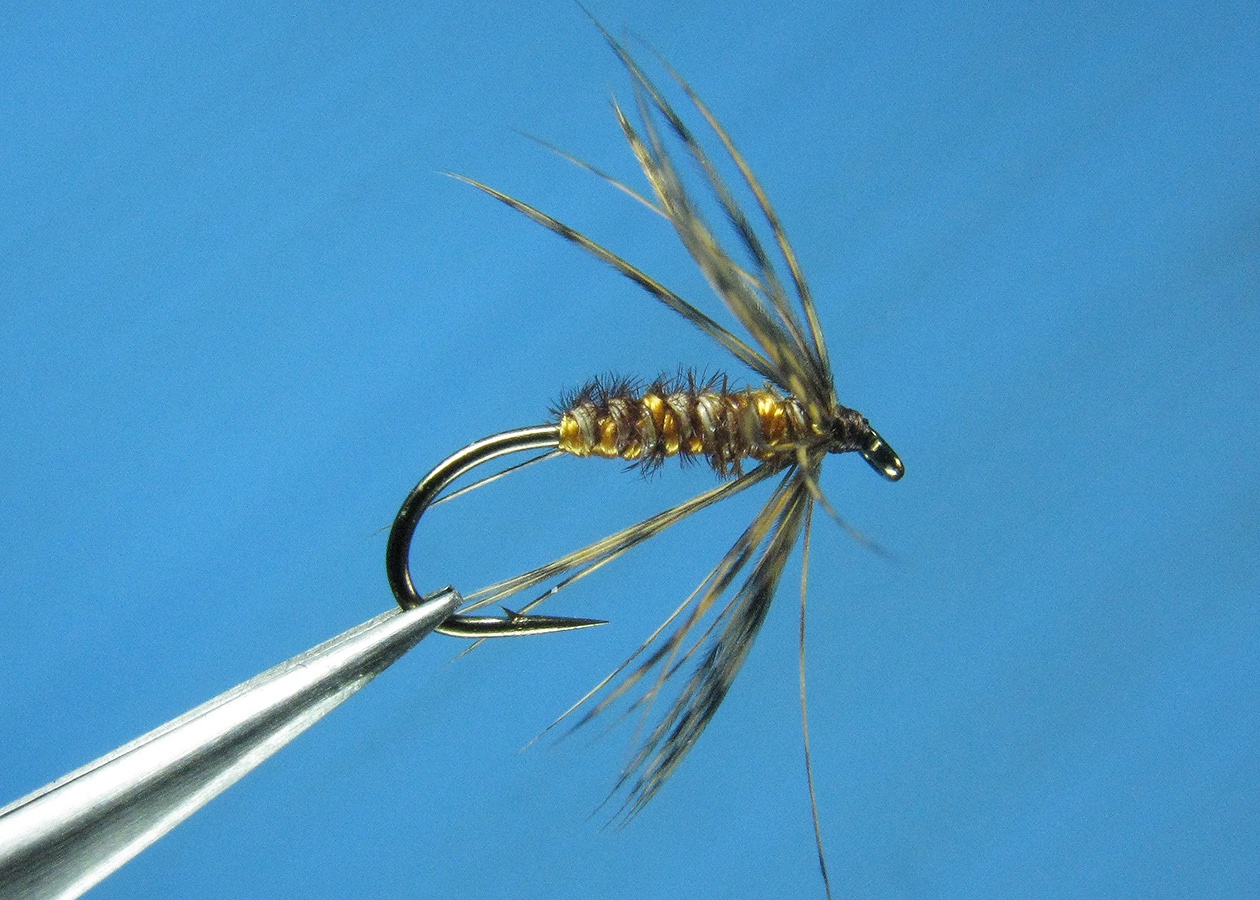 It is interesting that the three of you Eastern FF'ers all prefer soft hackle patterns that don't seem to resemble the real bugs. Makes me wonder if Eastern hendrickosn's are slightly different in color. I don't see gray/yellow in Hendrickson female duns and definitely not in the male duns. If you guys say they work I have to believe they work. Maybe the trout out East are all color blind.

Below are some more photos I have taken over the past 3-4 years when I forced myself to put my rod down and stand behind the trout with a small hand seine to capture flies in the drift. Also, Hendrickson nymphs scraped from the gravel along the bottom.

Hendrickson stillborn duns and a E. subvaria nymph. Notice the white line on the back of the nymph's wingcase. Right after I put my camera back in my pocket the white line split and the wings came out and a couple sends latter the dun totally popped out. About 10 sends later the new hatched dun flew off.
Hendrickson-duns-nymph.jpg (92.17 KiB) Viewed 1157 times

These are E. subvaria nymphs collected o photograph and then put back in the river. They were congregated in the shallow riffles getting ready to soon hatch.
Ephemerella-subvaria-nymphs.jpg (121.21 KiB) Viewed 1157 times

A soft hackle pattern I created to imitate the wings popping out from the nymphal shuck. I have never used it. :-)
Hendrickson-Soft-Hackle.jpg (46.81 KiB) Viewed 1157 times

When the hatch is dwindling I have often thought a winged wet fly might work well to imitate trout selectively taking stillborn duns. I would tie it with a dark gray dun colored wing, not a woodduck wing.
John s.
https://WiFlyFisher.com/
Top

ForumGhillie wrote: ↑
Tue Jan 08, 2019 7:26 pm
It is interesting that the three of you Eastern FF'ers all prefer soft hackle patterns that don't seem to resemble the real bugs. Makes me wonder if Eastern fly fishermen are all color blind. I don't see gray/yellow in Hendrickson female duns and definitely not in the male duns. If you guys say they work I have to believe they work. Maybe the trout out East are all color blind.

When the hatch is dwindling I have often thought a winged wet fly might work well to imitate trout selectively taking stillborn duns. I would tie it with a dark gray dun colored wing, not a woodduck wing.

If yo look at the newly emerged females, you'll see that they're more olive than pink, which is well represented by a waterhen bloa (the waxed silk turns that color, the touch dubbing just darkens it.) The hackle is a good match for the wing.

Take a look at the pictures on the troutnut page: http://www.troutnut.com/specimen/495.

And of course, color is the least important factor to match anyway. A Dark Hendrickson wet has worked well during Hendrickson hatches for over a hundred years now.

I agree with you about the males, though. Red quills are, well, red.

The spinners are a different matter.
Bob
Top

Jason is a friend of mine. I emailed him about his female Ephemerella subvaria photos you referenced from the Beaverkill. I have not seen that on the Namekagon River, nor do Jason's Hendrickson photos from the Namekagon look like that. Jason started is trout fishing on the Nam when his family moved to NW WI. before going to college in the East. Before retiring, his father was the head of the WI DNR out of Hayward, WI.

So I asked Jason about the photos you referenced from Troutnut (http://www.troutnut.com/specimen/495 ) and was he sure they were subvaria. Here is his response to me:

"John, I’m fairly sure that one is subvaria, captured along with males. I might have botched the color balance on the photo, but more likely it just looks different when uniformly illuminated by a bright flash than when under natural light."
John s.
https://WiFlyFisher.com/
Top

Light definitely has something to do with it. I've picked up quite a few Hendricksons that were floating by me (including some on Hendrickson's pool on the Beaverkill) and they appear olive to me when held one way and a bit pinkish when held another. Some have had a pinkish underside in the thorax only.

You may remember this discussion on SGM:

I missed this post and am late to the show.

I think the issue here is that your photo is of fully developed duns and the pattern you tied uses a material and a style that will fish in a manner pre-dun. Nothing wrong with fishing that stage mind you but your insect example is not at that stage. The hook, silk, dubbing and softer hackle all put the fly under the surface a bit. The pattern is great and tied nicely but to me its more for these emerging insects not formed duns. I think this is what Karsten was saying as well. You have fully formed wings and legs and a bolder color to contend with. Different appearance than the stage they are in when swimming to the surface. Hendricksons don't present wings until they are completely through the surface film. You should be thinking of a design that keeps the pattern in the surface film, partially above and partially below.

I generally approach this 2 ways in keeping with our "wet fly" topic and both incorporate more wing mimicry than pre-dun stage would.

1. A flymph with stiffer genetic hen or low grade cock hackle wound through out the thorax, a tail and on a lighter wire hook. I select a hackle color that represents both the wing color and leg color. I think a nicely marked honey dun would be a good choice for these Hendrickson's. Even if you think a fish is picky about subtle color differences, they don't think "hmmm, honey colored legs and a dun wing, orangish body with distinct ribbing..looks like the right combination". I think if the right colors are somewhere on the pattern, you are good to go. I took this idea from Atherton years ago and my experience confirms it at least to me. If a fish is keyed into a color, as long as the color is there somewhere in the pattern, you have it covered. Atherton's patterns are like hedging the bets. The fuzzy body and stiffer hackle of a flymph tied this way produces a lot of surface area for the pattern to hold in the film. With the light wire hook and little floatant you are presenting right where you need to be for the emerging dun. For the body I would probably choose a subdued orange thread and and a dubbing color to fine tune the overall appearance.

2. The second way I fish this stage is with an upright folded winged wet. The body is constructed depending on the profile of the insect. Either a simple spider body for thinner insects or a more dubbed body for more robust insects. The Hendrickson is kind of in-between so I think what you have done is appropriate. I use the upright wing as a tool for presentation. You are basically building an "emerger" pattern like Karsten mentioned and there are all kinds of material you could use for the wing to achieve this presentation (deer hair, snowshoe hare, cdc, hackle fibers, antron (Ray's favorite)) etc. I like to use the folded upright wing. I will put floatant on the upright wing only, so the pattern is suspended just under the surface with the wing in and slightly above the surface. Again, a light wire hook is appropriate. I like the folded wing because when the pattern eventually sinks below the surface (and it will as most any emerger patterns will at some point) it is a great copy of a drowned dun. I fish this style upstream and dead drifted almost just like you would a dry fly pattern. For your Hendrickson hatch I would use the fly you tied, add a folded upright wing (probably starling) and change the hackle to match the color of the legs of the dun.
I hate it when I think I'm buying organic vegetables, and when I get home I discover they are just regular donuts.
http://www.oldhatflytying.com
Top
Post Reply
31 posts